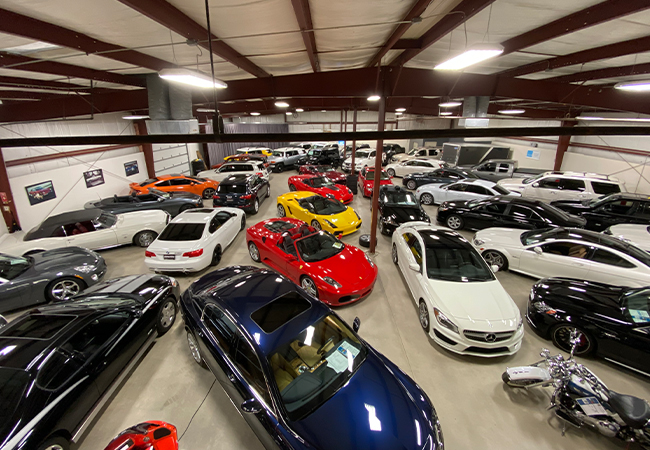 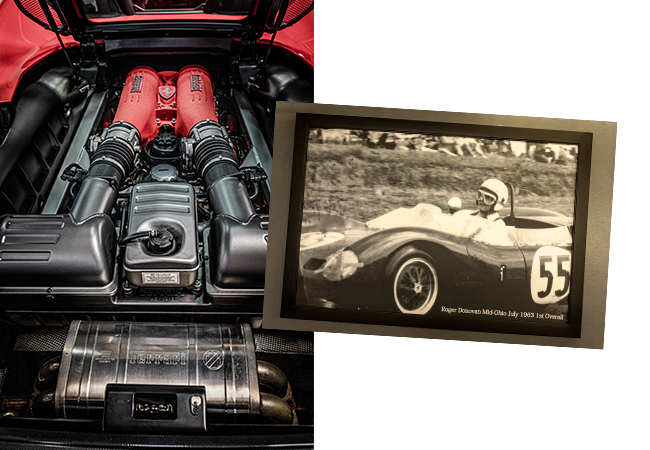 In a discreet warehouse building on a dead-end street in Middletown, an extraordinary place is hidden in plain view.

Seeing is believing at Rolling Stock Specialty Auto Sales. Owner and Founder Cary Donovan presides over a warehouse showroom that you might describe as a cross between a boutique and a museum. "It's always 75 degrees and sunny in my world," he says. He isn't kidding. From the moment you enter, a rush of dopamine swirls in your brain. As Frank Sinatra sings through the speakers, you walk past a vintage pinball machine, a desk made from Porsche wheels, and an old-time barber chair…then you become awestruck over some of the most beautiful automobiles you will ever see in your life.

Pristine exotic and classic cars sit next to what might be your future daily driver. The walls are lined with poster size photographs of Cary's father in his racecar driving days back in the '60s. "This car is in the Corvette Museum," Cary says, indicating the racecar in one framed photo. A beautiful 1967 Camaro that belonged to his dad sits in a position of esteem in the showroom. There are also mementos of the legendary Sam Swope, including his 2009 Harley Roadglide, his leather Lifetime Member Harley Owners Group vest in a frame, and his cherry red 1975 Pontiac Grandville convertible. Mr. Swope was a man of such character that his name remains synonymous with trust and benevolence even after his passing.

After a lifelong career in the automobile business, Cary left the Sam Swope Auto Group when it sold to a conglomerate in 2015. Cary then spent two years as a consultant for Cox Automotive, the corporation that owns Auto Trader, Manheim, VAuto, and Kelly Blue Book. Missing the excitement of the cars and personal relationships with customers, Cary retired and pursued his dream, opening Rolling Stock. The idea behind that name is that when you purchase a car right, you are truly driving and enjoying your investment- a literal Rolling Stock.

Today, Cary runs his dealership precisely the way he wants, and that's great news for his customers. "We do everything by appointment only," says Cary. "If there's one thing I know, it's that clients don't want to be sold. They want a trusted advisor to guide them. I'm here to give them my undivided time and treat their interest seriously."

Rolling Stock is a family affair, where Cary's wife, Stephanie, is CFO and office manager. Their daughter, Sloane, photographs all the vehicles and manages the RollingStockAuto.com website as well as digital and social media advertisements. Jennifer Wells, a colleague from the Swope days, handles all the title work, which is quite a feat at Rolling Stock. They have sold vehicles to clients in 45 of 50 states (even Alaska twice). Licensing, registration, and titling laws are different in almost every state, so Jennifer's years of expertise ensure accurate transfers for customers and earn her the "GENIUS" nameplate that decorates her office door.

As many of the vehicles are purchased and shipped all over the country, some of Rolling Stock customers never have the totally unique experience of visiting the showroom personally. Still, many satisfied customers are on their second and third purchases with Rolling Stock, including some with those purchases all in the same day. This is because Cary personally buys and oversees every vehicle's reconditioning as if he would keep it for himself. "I think of myself as somewhat like a foster parent to these automobiles," he says, wryly. He believes in finding the right car that fits a person's personality and character. It's all about helping people obtain their dream vehicles in a fun way, full of integrity and transparency. Not just a specialty car but a specialty experience. "I want it to be unique, fun, and laid back'" Cary says. There's no doubt that he has succeeded, and seeing is believing. Just read his reviews on such sites as Google, CarFax, CarGurus, and AutoTrader, then call him to make an appointment.