TOP 5 DINING: DINING AROUND THE DOWNS 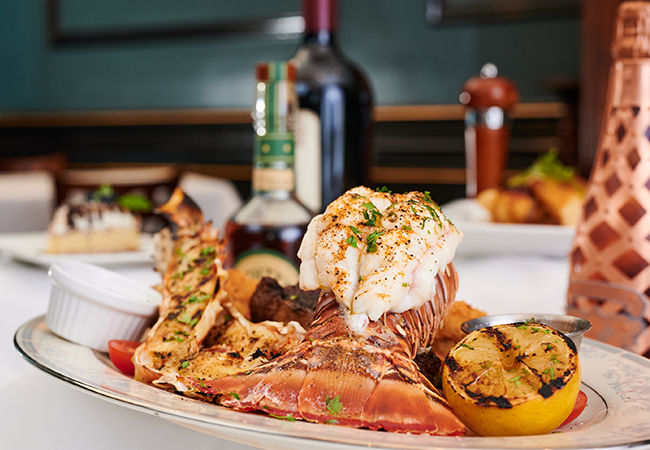 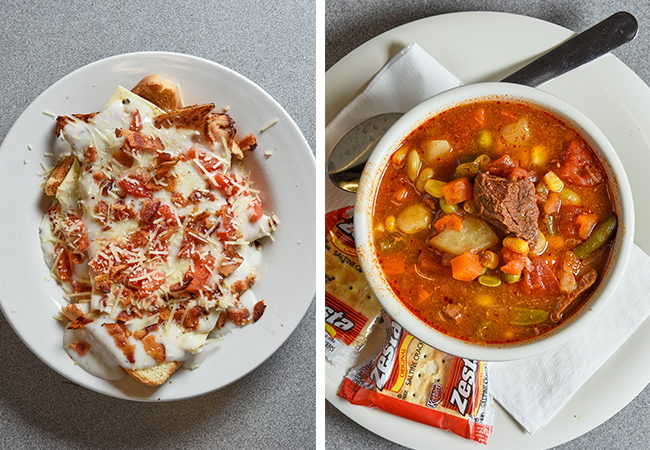 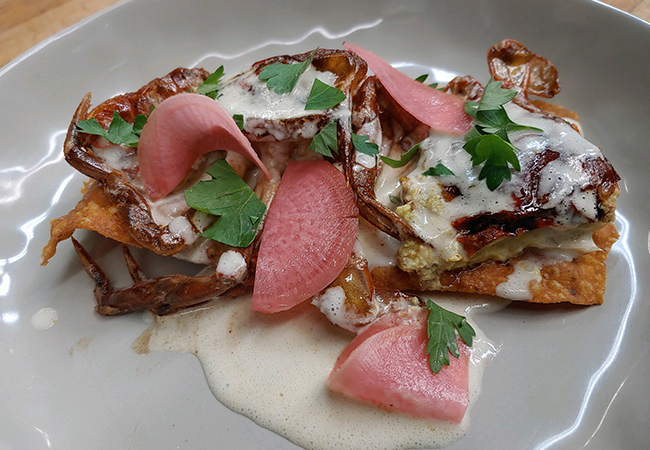 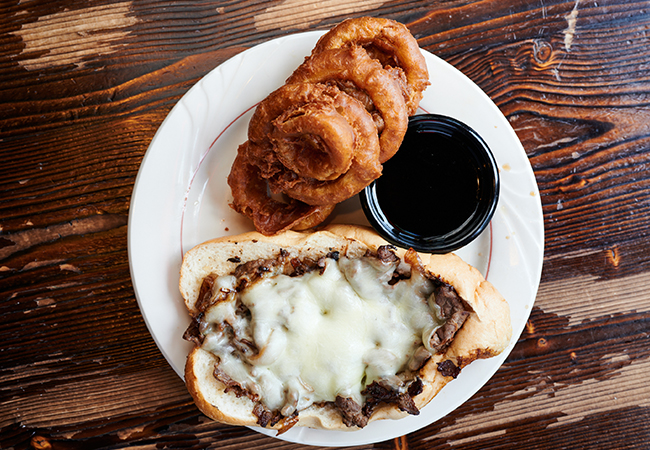 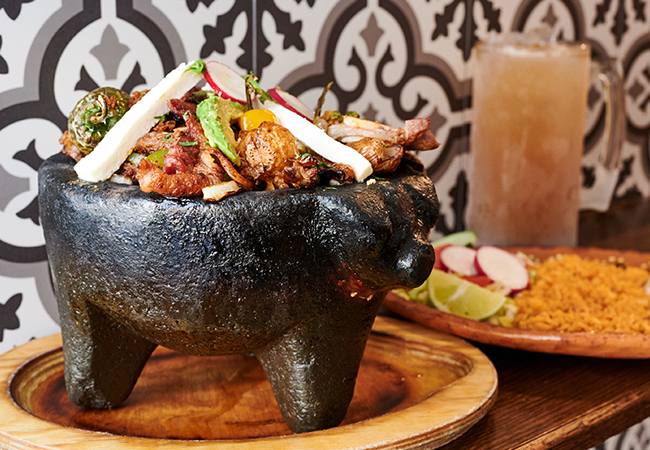 Better late than never, Kentucky Derby 146 is right around the corner! And right around the corner from Churchill Downs, we found where to dine well and see-and-be-seen with neighborhood locals, visiting celebrities, equine workers, and thoroughbred trainers. Listen up for hot betting tips, and leave a generous tip for good luck!

Located in Old Louisville’s Mayflower Building and a stop on the Urban Bourbon Trail®, Buck’s Restaurant and Bar opened in April 1992. Buck’s quickly developed a reputation as Louisville’s most romantic restaurant and the place to celebrate birthdays and anniversaries. Original owner Hensel “Buck” Heath took decor inspiration from moon gardens, composed of all white flowers that glow with the reflection of the moonlight. To this day, every woman dining at Buck’s receives a Star-of-Bethlehem flower upon leaving. It lasts about three weeks in water, and Buck always said that’s when it’s time to return for another.

General Manager Lisa Imrie is a native Louisvillian whose sister and brother-in-law, Susie and Curtis Rader, bought Buck’s in 1999. Lisa makes you feel like family from the moment you meet. She recommends allowing at least two hours for the dining experience. “We like to call it old-school dining, the way it used to be - no TV and no Wi-Fi.” Some high school prom-goers were having dinner at Buck’s one night when Lisa noticed them all staring into cell phones. She approached the table and suggested they live in the moment enjoying each other’s company. They agreed and certainly had a more memorable evening.

The continental cuisine is as top-notch as the live piano music and warm customer service. Executive Chef Allen Sims walked us through some menu highlights. Crispy Fish is finished with sautéed peppers and red onions in a hot-sweet Thai chili sauce and served over jasmine rice. The Kentucky Lawyer is pan-seared lobster and julienned jowl bacon in Angel’s Envy bourbon cream sauce over mashed potatoes and asparagus. Fancy a steak? Try the popular Filet Mignon or indulge in the surf-and-turf feast that is the Master NY Strip. Saveur Magazine has named Buck’s Mocha Dacquoise the Hidden Gem of Louisville.

Wagner’s World Famous Diner, aka Wagner’s Pharmacy, originates with Hagen’s Pharmacy delivery boy Leo Wagner. Leo eventually purchased Hagen’s in 1922 with money borrowed from a great aunt. Old-timers at Wagner’s still refer to third-generation Owner Lee Wagner as “Little Lee” from childhood days spent with his father and grandfather. “It’s in the blood,” says Lee, “Just like Dad, I’m guilty of spreading Derby fever.” The grill and restaurant were added to the Pharmacy’s soda fountain in the mid-1960s, allowing more room for Churchill Downs trainers, owners, and jockeys to congregate.

Wagner’s still operates a general store there with convenience items, racing forms and programs, and officially licensed Churchill Downs and Kentucky Derby souvenirs. Acquired in 1965, Becker & Durski Turf Goods next door produces jockey silks and caps, saddle towels, and Wagner’s Racehorse Liniment. Wagner’s Pharmacy is so ingrained in Derby lore that a scene from the feature film Secretariat was shot on location there. “We’re the Cheers of diners. You make instant friends,” says Lee, “Our staff is like family, and most have been with us 15-plus years.”

Hit the trifecta with breakfast at Wagner’s, a visit to the Kentucky Derby Museum, and an afternoon at Churchill Downs. Wagner’s made Esquire Magazine’s Best Breakfast Places in America list in 2014 and represented Kentucky for Food Network’s 50 States of Diners in 2019. Lee recommends their Honey Glazed Ham & Eggs with biscuits and tomatoes or the Best of Louisville Biscuits & Gravy. For lunch, try the Vegetable Beef Soup & Grilled Cheese, the hot ham Derby Sandwich, or a classic Kentucky Hot Brown - “A Louisville tradition!” Wagner’s has a new outdoor dining area, adding 25-30 additional seats for expanded Derby Week hours. Proceeds from alcohol sales and drink specials, like mimosas for Dawn at the Downs, will benefit the Jockeys’ Guild.

In 2001, a young Brooklyn-born-and-raised chef attended the Kentucky Derby. He was so taken with Louisville and Southern cooking that by 2002 he had made Louisville his home. Chef Edward Lee began working with 610 Magnolia Chef/Owner Ed Garber and took over the restaurant upon Ed’s retirement in 2003. Chef Lee’s new Korean-Southern cuisine made quite the splash and propelled his career to national recognition.

Edward Lee is a four-time James Beard Award nominee who owns two restaurants in Louisville, 610 Magnolia and Whiskey Dry. He is Culinary Director for both DC-area locations of Succotash®. Chef Lee has published two books, Smoke & Pickles: Recipes and Stories from a New Southern Kitchen and Buttermilk Graffiti: A Chef’s Journey to Discover America’s New Melting-Pot Cuisine. Buttermilk Graffiti won the 2019 James Beard Award for Best Book of the Year in Writing. In 2017, he co-founded the LEE Initiative with Lindsey Ofcacek to address issues of equality, diversity, and restaurant and restaurant workers’ relief. Chef Lee recently converted his former Louisville restaurant MilkWood into the McAtee Community Kitchen.

610 Magnolia, in the heart of Old Louisville, has remained a beloved culinary institution under the direction of Chef Lee with Executive Chefs Kevin Ashworth and Jeff Potter. For the first time in the history of the restaurant, they are introducing a locally-sourced, seasonality-focused à la carte menu, which changes nightly. The nightly Tasting Menu is still available and updated weekly. “We are dedicated to our craft, always pushing the envelope and continuing the culinary legacy that put Louisville on the map,” says Chef Lee. “You have to be willing to be surprised.” In her review last summer, Courier-Journal Food Critic Lindsey McClave mentioned the beverage pairings as well worth adding to the experience and declared 610 Magnolia the best restaurant in Louisville.

Just over six years ago, an arson fire extensively damaged Old Louisville Tavern. Co-owners Scott Lukemire and Dan Borsch had just purchased and remodeled the Tavern in 2013. Despite the tremendous setback, they rededicated themselves to restoring the former grocery and post office. They salvaged the original beams and set about upgrading the 1933 building for a second time. Scott Lukemire is originally from Cincinnati, where he spent some time with family at the neighborhood bar. He worked his way up from bartender to management in Columbus, Ohio. Management jobs led Scott to Louisville, where he got his chance to open a tavern and form the Rivalry Restaurant Group with Michigan fan Dan.

Along with the building’s renovation, Old Louisville Tavern’s food, bar program, and customer service are all about attention to detail, according to Scott. “We make all of our sauces from scratch, and we make the salad dressings in-house. We don’t compromise with cheaper ingredients. We will spend whatever it takes to get that perfect bite on the plate. Our staff treats all customers as though they are entering an upscale restaurant.” They enjoy a high level of service in a comfortable atmosphere.

The customer service philosophy may very well have inspired The Fancy Pants Burger, “seasoned with white truffle oil and topped with herbed goat cheese and wild mushrooms served over caramelized onions, arugula, and dijonaise.” Another option is their classic Knocker Burger, served in-house since 1933. The hand-cut fries are a perfect accompaniment to the burgers and The Old Louisville Dip: “rosemary roast beef on a hoagie with caramelized onion, provolone cheese and au jus for dipping.” The Railroad Smoker Mac’n’Cheese is a meal in itself. Old Louisville Tavern’s spacious patio allows for enjoying summer evenings with safe food and drinks at safe table distances.

Jasmin Condolaimos and her husband, Arnulfo Rodriguez, established El Molcajete Mexican Restaurant in 2011 and have operated out of the current location since 2013. The authentic Mexican cuisine draws inspiration “from all over Mexico,” says Jasmin, and is “a blend of all our cooks’ and employees’ home regions.” Three-time James Beard Award Semifinalist and Bar Rescue Culinary Expert Chef Anthony Lamas of Seviche Restaurant in Louisville has called El Molcajete “Hands down the best Mexican restaurant in the city.” With family on staff along with other long-time team members, the restaurant and the food exude a family feeling. “It reminds me of my mother’s cooking with lots of heart and soul,” added Chef Lamas.

El Molcajete is “very traditional,” says Jasmin. “We serve the food the way we would eat it at home. Everything is made in-house by hand with fresh ingredients.” As Owner/Operators, Jasmin and Arnulfo can be found hands-on in the kitchen. She was chopping onions as part of the day’s prep work while she talked about the restaurant and its menu. Before owning El Molcajete, Jasmin had worked in interior design, and Arnulfo sold irrigation systems. Now they are happy to be featured on The Zimmern List, one of celebrity chef Andrew Zimmern’s Travel Channel shows.