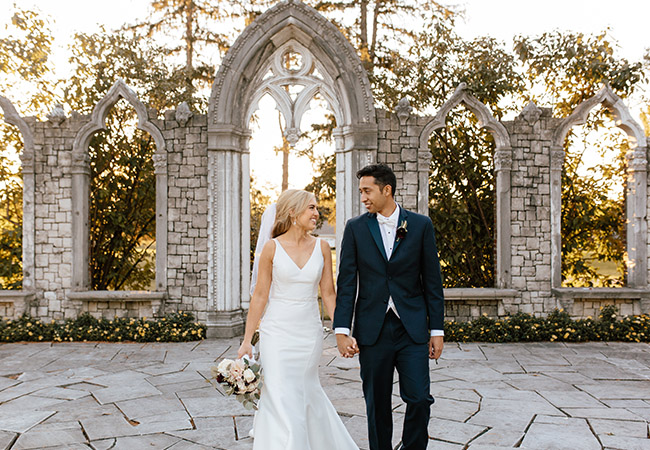 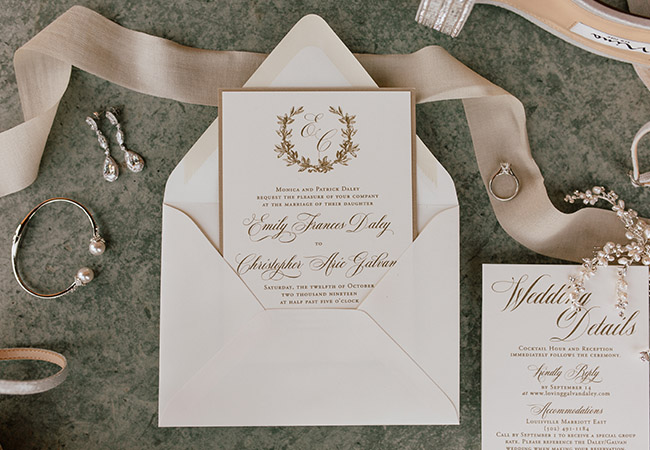 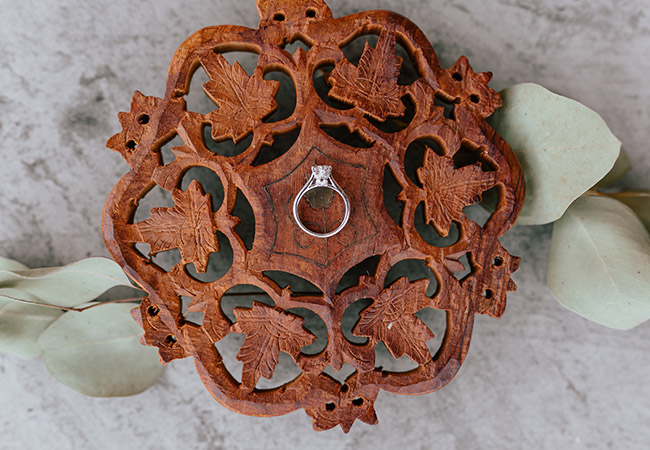 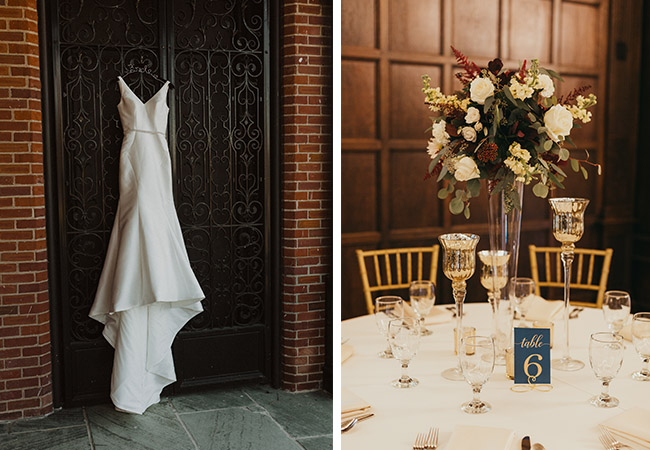 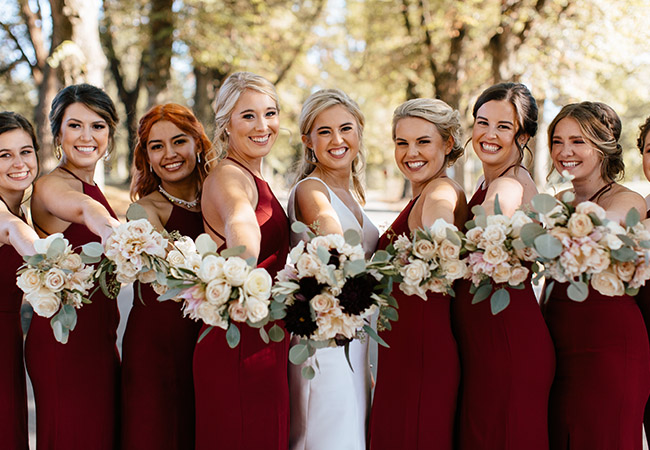 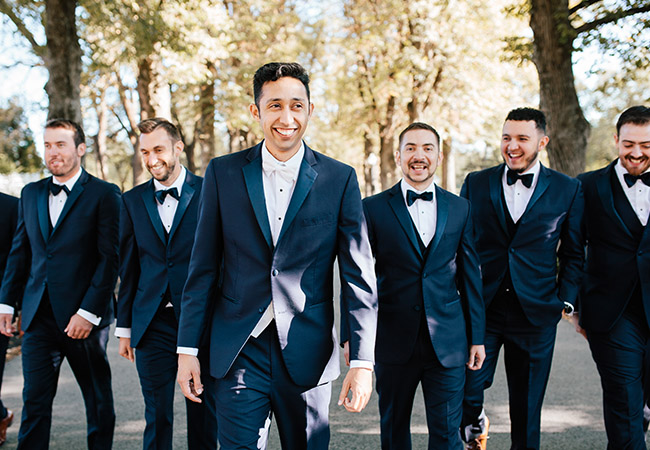 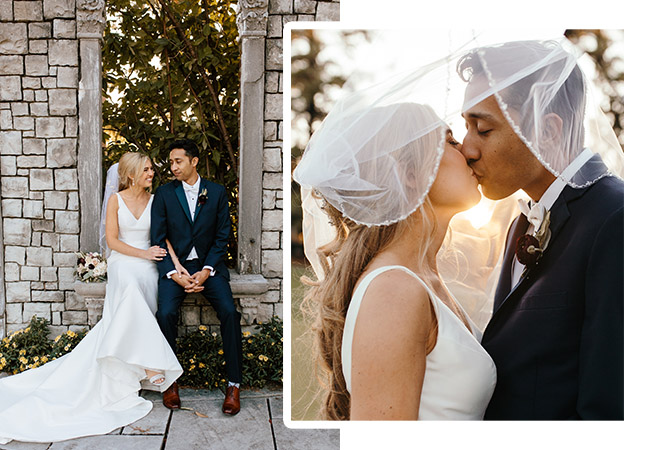 A Kentucky girl and a Texas guy recently had a swinging good time at their October wedding. Emily Daley and Christopher Galvan tied the knot at Hurstbourne Country Club outside, overlooking the landscape of the property.

The couple met in 2015 while working on the same engineering team at a company in Indiana. Emily, now a biopharmaceutical manufacturing supervisor, says Chris, a business development manager, “fooled” her into their first date after asking the team if they wanted to see a movie together, fully knowing that the others had either seen the movie or were busy. “(We) have been together ever since.”

Emily was born and raised in La Grange and went to college at the University of Kentucky. While dating, the couple spent much of their time in Lexington. Although Chris is from Texas and lived in Indiana while the couple dated long-distance, Emily converted her future husband into an honorary Wildcats fan, as well as a lover of Keeneland racetrack.

When the couple was engaged, they envisioned having their ceremony in a church. As they started the planning process, they liked venues that were able to handle both the ceremony and reception for Chris’ family flying in from Texas.

There was one reason Emily says they chose their venue at the country club; “It was beautiful.” Looking through social media, the couple stumbled upon a photo of a friend of a friend who attended a wedding at the venue. It pictured the old stone wall where Emily and Christopher would soon be married. “When we found Hurstbourne, it was the best of both worlds,” Chris says. “We were able to have our ceremony outside at the stone wall, which allowed us to capture formality in the service but also let us enjoy the landscape of the property.”

The couple exchanged their own vows, which made the ceremony more personal, according to Chris. “We kept the handwritten vows as a keepsake to look back on years from now.” When her daughter was young, Emily’s mother purchased an embroidered handkerchief, intending to give it as a wedding gift. The night before the wedding, Emily’s mother gave it to her with the wedding date added to the embroidery. Emily was able to wrap the handkerchief around her bouquet and carry it all day for any “emotional moments.”

During the ceremony, the couple planned to light a unity candle together, however, right as the pastor was moving into that portion of the program, the couple realized that the two candles to unite were not lit; Emily and Chris forgot to light them before the start of the ceremony. Chris whispered away from the mic with a chuckle, “Should we ask the audience for a lighter?” But the couple skipped past that section, and all was well.

The clubhouse, which was originally built as a small farmhouse in 1854, and remodeled and expanded in 1920, was the space for the reception. The couple danced all night without the fear of troubling weather, according to Chris. “It has many unique touches that truly make it special,” Emily says. The main dining room is surrounded with antique oak paneling and an ornamental 14-foot ceiling and a fireplace at the center of the room.

Because the clubhouse was stunning by itself, the couple says they didn’t need much decor. They chose neutral linens, simple greenery, and candles on most tables with a few larger centerpieces to add a pop of color around the room. Candles and draping eucalyptus highlighted the fireplace mantle. The couple even made their own photo booth with pipe and drape, and crafted a faux floral accent for the top of the backdrop. A polaroid camera was set out with props so guests could add their photos to a blank memory book and leave a note. “(It) was so sweet (and absolutely hilarious) to read through once we got back from our honeymoon,” Emily says.

Favorite moments from the big day included the toasts made by Emily’s sister and Chris’ groomsmen. There was also a time at the end of the night when all the guests cleared outside; the DJ played one last song for the couple to savor the last bit of their wedding.

Advice for other couples includes Chris’ suggestion: “Just have fun.” Emily also says, “The day will go by so fast, remember to cherish the little moments. We were so lucky to have all of our friends and family come together to make the day wonderful.”

The only thing the couple may have done differently is “eat the cake,” according to Chris. “We only got to taste the first bite we took together. After the cake was cut, dancing opened up and we got so busy, we forgot about it.” Speaking of dancing, the couple admits their effort often outweighs their talent. They did, however, master a simple swing dance before the big day and used it as their first dance – with many more to come.