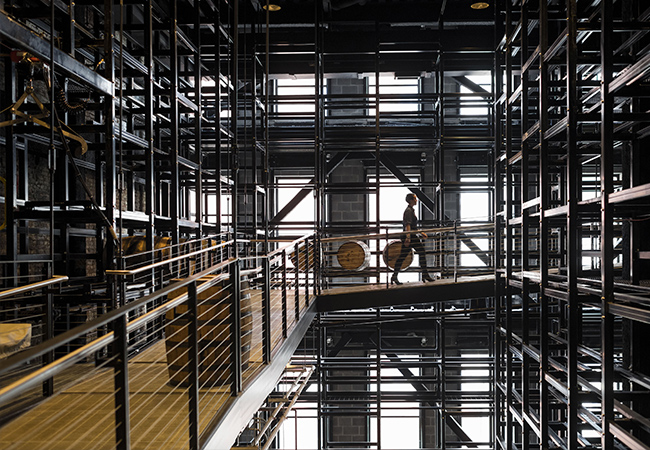 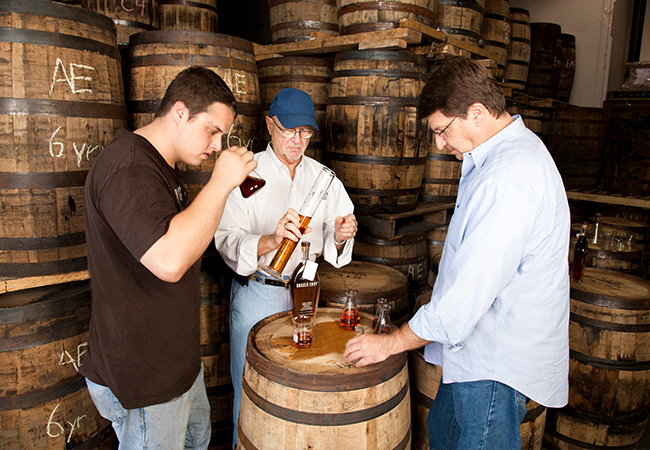 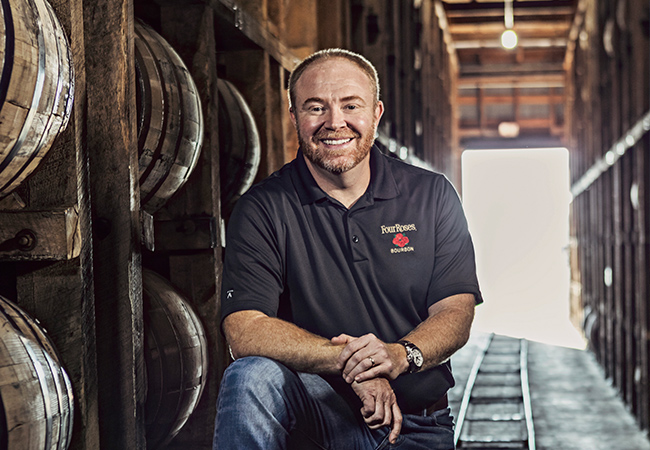 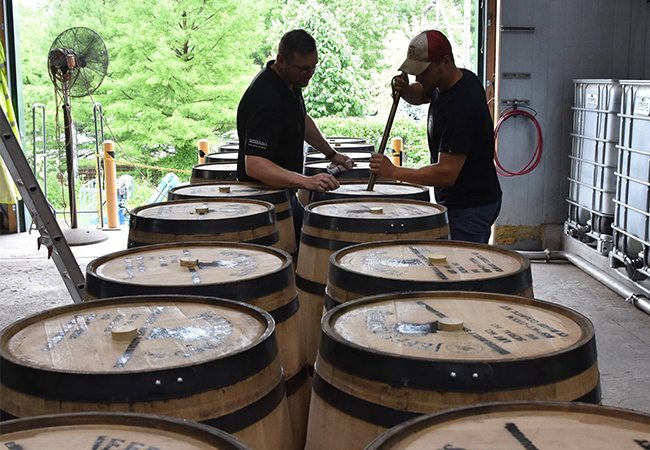 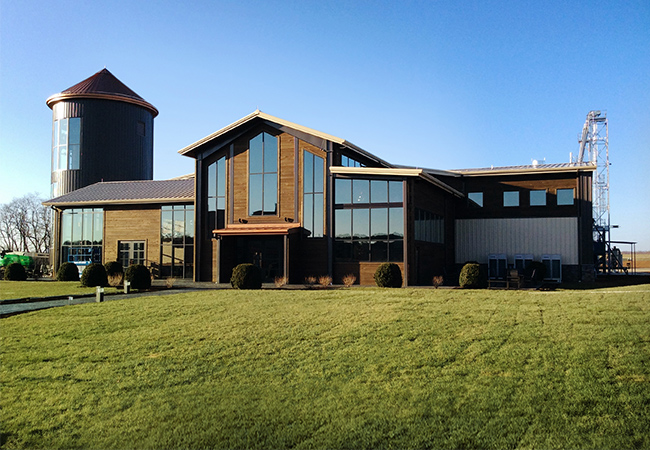 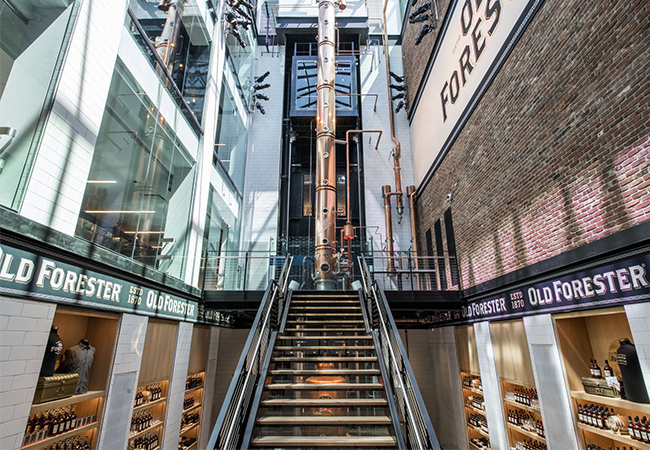 The Urban Bourbon Experience™ in Louisville, including (among others) Angel’s Envy and Old Forester® distilleries, is “the Gateway to Bourbon Country” and “the scenic tours of legendary countryside distilleries” like Four Roses® in Lawrenceburg, Kentucky Artisan Distillery in Crestwood, and Lux Row Distillers™ in Bardstown. Through these five, we tell the spirited story of our bourbon heritage.

The story of Angel’s Envy™ begins with Lincoln Henderson’s 40-year career as a Master Distiller at Brown-Forman, where he created other iconic brands such as Woodford Reserve, Gentleman Jack, and Jack Daniel’s Single Barrel. He was one of the first Kentucky Bourbon Hall of Fame inductees and received Malt Advocate’s Lifetime Achievement Award. Lincoln came out of retirement in 2006 to join his son Wes in developing the port barrel finish bourbon that would finally launch the Angel’s Envy™ brand in March 2011. Lincoln Henderson passed away a few months after the distillery’s groundbreaking in 2013. Co-founder and Chief Innovation Officer Wes Henderson originally envisioned Angel’s Envy™ as a fine little craft bourbon. It has since become a global brand.

“Angel’s Envy™ is at the forefront of innovation in the bourbon industry with our secondary barrel finishes,” says Wes. Angel’s Envy™ Kentucky Straight Bourbon is finished in small batches of 8-10 ruby port wine barrels. The Finished Rye is given a rum cask finish. Angel’s Envy™ Cask Strength comes in at 122.4 proof, yet retains a complex smoothness worth the wait and worth sharing. In 2019, the Angel’s Envy™ Cellar Collection featured limited-edition Oloroso Sherry and 10-year Tawny Port finishes.

Following the storied career and award-winning experimentation of Lincoln Henderson, Angel’s Envy™ continues to benefit right down the Henderson line with Wes Henderson and his six, count ‘em six, sons. Four of the six work at the distillery; and the other two are still in high school. Wes began his career as an on-air Louisville radio personality at the age of 15. He has always had an interest in aeronautics and still flies when he can find the time. Finding the time is the trick, as Wes is also an entrepreneur, volunteer firefighter, and death investigator for the Oldham County Coroner’s Office.

In his work with Angel’s Envy™, Wes strives to honor the history of bourbon by creating spirits that have character and a story to tell. Elevating the brand, taking it in different directions, and drawing inspiration from his sons’ fresh perspectives keeps Wes attuned to his father’s legacy. The distillery is the first full-production bourbon facility in downtown Louisville. According to Wes, it still manages to convey warmth and familiarity through their award-winning hospitality staff. “It breathes and has life.” As for the future? Lincoln’s little black book of spirited ideas is keeping its secrets.

The Four Roses® brand was trademarked in 1888 by Paul Jones, Jr.; and its first home was 136 East Main Street on Whiskey Row in Louisville. Four Roses® remained in Louisville up to and through Prohibition as one of only six bourbon distilleries allowed to continue sales for medicinal purposes. The brand was acquired by Seagram’s in 1943 and by the late 50s was sold for export as a straight bourbon whiskey. But domestically, Sam Bronfman of Seagram’s converted Four Roses® to a blended whiskey. Sales in the US would decline until 2002 when Kirin Brewing Co. of Japan bought the brand and reintroduced Four Roses® Straight Bourbon Whiskey to Kentucky and eventually to all 50 states. Four Roses® has called the Old Prentice Distillery home since the property was purchased by Seagram’s in 1946. The main Spanish Mission style building was built in 1910 and is on the National Register of Historic Places. The Lawrenceburg distillery was finally given the Four Roses® name in 1994, is located 55 miles from Downtown Louisville, and recently completed a $55million expansion project.

Four Roses® now produces only Kentucky Straight Bourbon Whiskey. The Original and the High Rye Single Barrel each received Double Gold in 2019 at the Cigar & Spirits World Spirits Competition. The Small Batch won Gold at the same competition last year, as well as at the Denver and SUNSET International Spirits Competitions. Small Batch Select was ranked #3 in Whisky Advocate’s Top 20 of 2019 and is Brent Elliott’s proudest achievement.

As Master Distiller and Director of Quality, Brent hand selects a few precious barrels from Four Roses® 10 Bourbon recipes for Limited Edition special releases. The 10 different recipes combined in different combinations produce distinct flavor profiles. Brent graduated from the University of Kentucky with a B.S. in Chemistry. He joined Four Roses® in 2005 where he worked in product analysis, quality control, and marketing and events. “I had a hand in every part of the process. It all comes down to the quality of the liquid in the bottle.” Brent was named Master Distiller in 2015 and enjoys the travel and added Public Relations duties involved in the role. In February, he was awarded Whisky Magazine’s Icons of Whisky America 2020 Master Distiller/Blender of the Year. “It was an honor for me; but it reflects on the entire (Four Roses®) organization.”

Kentucky Artisan Distillery’s Master Distiller Jade Peterson is the first to admit that he does not come from the typical scientific background of most other Master Distillers. His expertise is grounded in logistics and process manufacturing. He enjoys having his hands in the process, respecting the “true craftsmanship, art, and personal touch” of Kentucky Bourbon. The facility is not automated. Everything is still done by hand, making KAD’s process as authentic as possible to the way bourbon was produced more than 200 years ago. Jade’s personal flavor preference is a sweeter corn profile with notes of tobacco and honey. Of the 13-plus labels in the Jefferson’s Bourbon family, the complexity, sophistication, and balance of Jefferson’s Reserve ranks at the top of Jade’s list.

During a KAD tour, guests truly feel a part of the process walking right up to the actual equipment, through the laboratory, and meeting the people behind the brands. The general history of bourbon is shared along with the heritage of the brands themselves. As distillery tours resume and employees move back into their original roles, KAD remains mindful of everyone’s safety. Chris Miller had retooled the facility to keep employees working by producing both hard-surface sanitizer and bourbon, as much as they were able. The sanitizer was donated to the National Guard, U.S. Post Office, and area fire departments, among others. As focus shifts back to full bourbon production, KAD continues to expand. They will soon add a Vendome column still to increase production.

Lux Row Distillers™ in Bardstown, Kentucky rolled out its 50,000th barrel just last month. Construction on the distillery began in 2016 and Lux Row Distillers™ opened to the public in April 2018. As a cheeky little homage to that grand opening date, their 12 Year Double Barrel Lux Row Distillers™ bourbon has a proof of 118.4. Lux Row sets themselves apart with more creative choices in various barrel finishes. But don’t let all the newness and innovation fool you. There is a proud old heritage behind their storied brands and proprietary recipes, some dating as far back as 1843. Lux Row Distillers™ brands include David Nicholson®, the blended rye and wheat mashbills of Daviess County®, the mellow genuine sour mash Ezra Brooks® acquired in 1993, and the “Defiantly Smooth Wheated Bourbon’’ Rebel Yell®.

Specially curated by Head Distiller John Rempe, who also serves as Research & Development Director, each “Pact” of the Blood Oath series is a unique combination of “rare and wonderful, famous and forgotten” bourbons given the respect they deserve through John’s 22 years of spirit distillation science and artistry, including rye whiskeys and wheated vodkas in Canada and the Guadalajaran tequila of Destiladora Gonzalez. John and his team endeavor to source locally as much as possible and uphold Lux Row’s family atmosphere.

According to John, Lux Row Distillers™ production tour begins with a five minute video of the company’s history and then takes you “through the guts of the distillery”. Artwork along the walls also helps tell the story with vivid images. All five senses are engaged, including tastings at multiple stages of the process. You’ll learn about barreling in the rickhouse with walls of barrels soaring up through six stories. In the final tasting, you’ll enjoy three whiskeys paired with chocolate, all enjoyed at the copper-topped bar of the tasting room. No visit is complete without a stop in the gift shop and some time spent on the outdoor patios. John is looking to convert the historic “old house”, originally set on a 90-acre farm in 1806, into a VIP Lounge. As tours resume, Lux Row “will follow all state guidelines and protocols for employee and guest safety.

The Old Forester® brand was established by pharmaceutical salesman George Garvin Brown in 1870, when whiskey was being sold for medicinal purposes. Pharmacy customers brought their own vessels to be filled with “whiskey” of decidedly questionable ingredients. George made it his mission to improve the consistency and quality, resulting in the First Bottled Bourbon™. Old Forester® continued to sell through Prohibition as the only bourbon distillery to do so without ever changing hands. It is the brand that founded Brown-Forman.

Master Taster Jackie Zykan has been in the industry for 14 years and with Old Forester® for 5 years. She has worked as a bartender, bar manager, and Beverage Director for Falls City Hospitality. With the Old Forester® opportunity, she was finally able to put her Chemistry/Biology degree to work. Jackie described for us the company’s distinction between Master Taster and Master Distiller. Brown-Forman Master Distiller Chris Morris has purview over “what goes in” to the spirits. As Old Forester® Master Taster, Jackie is responsible for “what comes out” in a “half global marketing, half production” role.

While Jackie’s personal flavor profile preference tends toward the sweet, “Our target is balance.” For example, ensuring that a bourbon “doesn’t drink hot.” Consistency is still an Old Forester® priority, ensuring each batch is the same using held reference samples. There are many expressions from their mashbills of Kentucky Straight Bourbon Whiskey and Kentucky Straight Rye, “something for everyone. We have 11 different children now,” says Jackie. She did not dare name a favorite and considers each of them “a quintessential showing of what Kentucky Bourbon is supposed to taste like.”

Old Forester® operations and processes are controlled in-house and distinguished from other distilleries by making their own barrels, using a proprietary yeast, producing a distillate that must pass 30 quality checkpoints, and implementation of heat-cycled warehousing. The standard Old Forester® Distillery Tour on Whiskey Row takes visitors through the entire process, from distillation to fermentation to coopering to tasting. It is the only distillery in Louisville with distillation and a cooperage in the same facility. Until distillery tours resume, Old Forester® offers their products and beautifully gift-wrapped and packaged gift sets curbside, ready for placing at the doorstep of a special someone. Jackie recommends keeping your eyes peeled this year for Old Forester® 150th anniversary celebratory offerings.