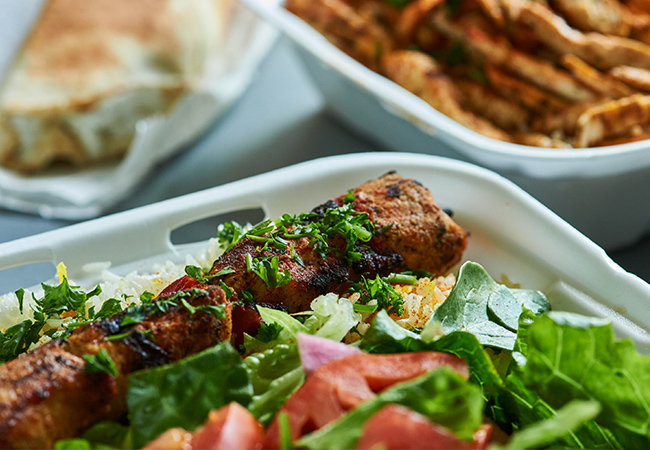 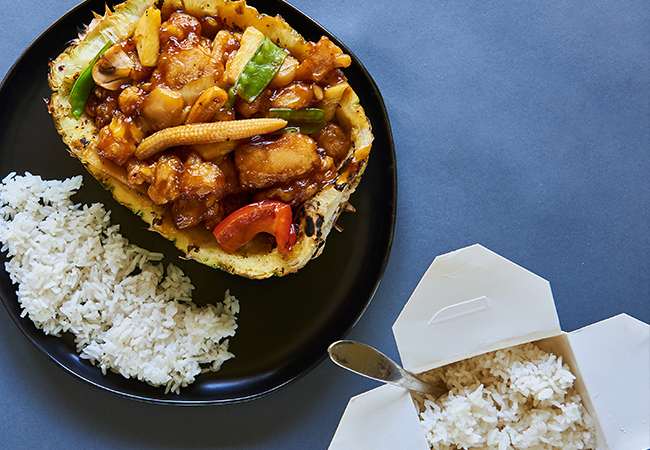 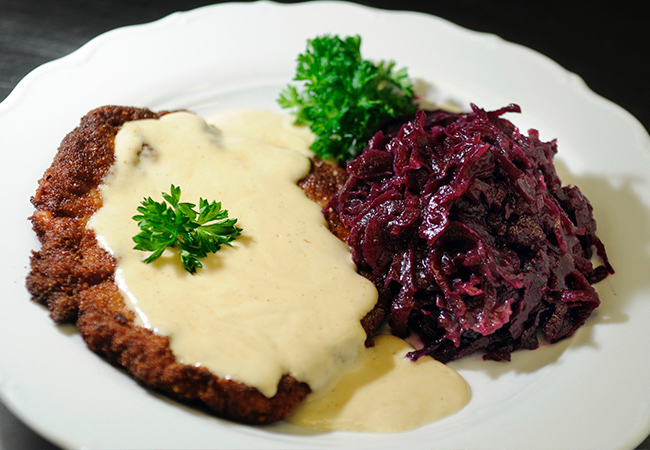 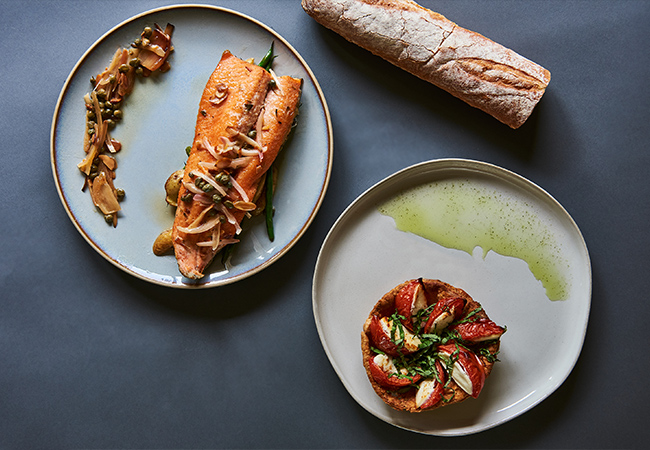 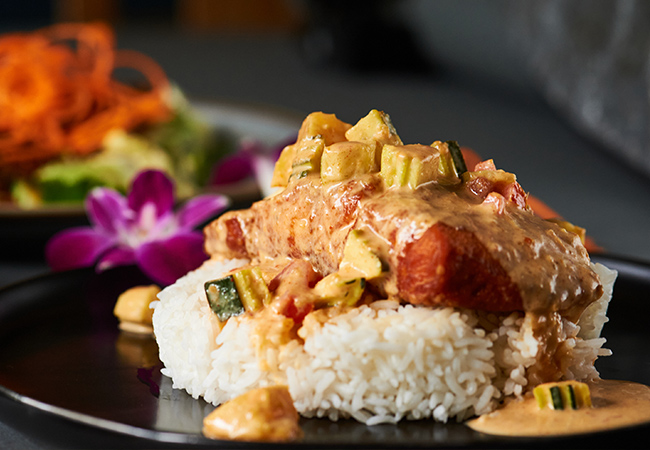 Supporting local restaurants is more important now than ever before. Louisville’s  diversity of global cuisines has made this city a rising star on the culinary scene. With national accolades really pouring in over the last five years or so, your patronage not only sustains that momentum but the very survival of these unique eateries.

A halal restaurant serving delicious fare from the Middle East, Safier Mediterranean Deli opened in Louisville in 2002. Current Owner/Head Chef Youness El Mesyah took over in 2016. The restaurant, branding, and website all have a fresh, new look; and the primarily Lebanese menu with Indian specials is not only a draw downtown, but a destination for customers throughout metro Louisville. Youness grew up in the Moroccan countryside and the restaurant’s recipes reflect his upbringing and are all made from scratch. Even the pita bread is made locally. Youness came to the US in 2011 at the age of 20 and started working in restaurants here in Louisville. He treats his employees as family and supports them in whatever ways he can, including offering free food to them and others in the community during Ramadan.

Safier offers carryout, downtown delivery, and third party delivery through DoorDashⓇ and Postmates. Daily Lunch Specials add variety with dishes like Chicken Korma, Chicken Biryani, Chicken Saag, Lamb Biryani, and Lamb Shank. Tuesday’s Chicken Tikka Masala is always a big hit with customers. Some regular menu features are Hummus w/ Pita and Falafel, which is also available as a Platter with hummus, and as a Sandwich. The Vegetarian Platter offers a selection of four of the following: stuffed grape leaves, hummus, falafel, mutabal, rice, tabbouleh, mujadara, spinach pie. Popular Main Dishes are Shish Kabob with charbroiled tenderloin, onion, and green pepper with a side of hummus and Chicken Shawarma grilled and marinated with garlic sauce on the side.

Youness cherishes the special relationships he and the Safier Crew have with their customers. “We love cooking for them and appreciate their support.”

Alan Jones, Senior Vice President and Partner at Assured Partners NL, LLC, was having dinner at Tea Station Asian Bistro when owner Roland Wong mentioned he would be retiring and selling the restaurant. Alan had no food and beverage industry experience, but neither could he imagine Tea Station without Roland. Alan offered to buy the restaurant; and they closed the sale in just two weeks. The Asian Bistro had originally opened in 2007; and Alan took over in 2014. He would go on to add a full bar, delivery service within 10 miles one way, and the return of a sushi program. The food is made fresh every day and enjoyed for dine-in, takeout, delivery, and at Norton Commons Concerts and Sundown Street Parties.

Alan relies heavily on Managing Partner Roland Wong, his fantastic employees, and excellent kitchen. Social media has been key to keeping customers informed of Tea Station operations and specials, with special thanks to the Louisville Take Out Facebook group. During coronavirus Healthy At Home restrictions, Tea Station Asian Bistro has supplied food to Maryhurst and Ronald McDonald House and no questions asked to anyone hungry and in need.

The German-born and raised Greipel family, with the exception of oldest daughter Simone born in London, lived in Louisville for one year in 1986. They realized during that time that Louisville was in desperate need of a good, authentic German restaurant. The idea stuck with them for six years until they packed up a 20-foot container again and headed back to the US. The Greipels pulled together money from the family and opened Gasthaus at its current location on December 18, 1993.

Annemarie’s cooking experience was limited to all the meals she had prepared for her family over the years. Her stepfather had a bakery in England where she lived for twenty years; but Annemarie had no interest in baking then. For a time, desserts served at Gasthaus were purchased elsewhere. Annemarie eventually taught herself to bake, which she has passed on to her daughters, Nina and Simone. Together they are responsible for all Gasthaus desserts, which like the rest of the menu are prepared from scratch daily. Husband and co-owner, Michael, is Executive Chef working alongside chefs Justin Huber and Jimmy Kave. Back home in Germany, Michael’s rouladen, dumplings, and cabbage were his Sunday specialty.

At press time, a firm reopening date for Gasthaus had not been set; but the Thursday through Saturday evening Curbside Take-Out Menu remains a big hit. Gasthaus has retained its kitchen staff at full pay; and family still works there as they always have. Menu staples are Pork Jäger Schnitzel, tender breaded pork loin sautéed and served with a brown bacon and onion sauce and topped with fresh sautéed mushrooms, and Beef Gulasch, Hungarian style beef cubes in a spicy beef and paprika sauce, both of which pair well with Spätzle, Red Cabbage, Pan-Fried Potatoes with Onion & Bacon, or Sauerkraut. New customers are welcome to discover why so many Gasthaus regulars keep coming back for more. photo courtesy of Nina Greipel

Reminiscent of Alsatian and Parisian brasseries, Brasserie Provence serves Southern French comfort food in a relaxed atmosphere. Restaurateur Guy Genoud and his wife, designer/photographer/marketing expert Stacy Duncan, opened Brasserie Provence in 2013, recreating the ambience of a comfortable, neighborhood restaurant in the south of France. There are two sides to the restaurant here in Louisville, one with French country decor and the other with a more modern, urban design.

Guy is originally from Cannes, had an apprenticeship at the 5-star, luxury Claridge’s Hotel in London, England, and worked in restaurants in southern France. He came to the US over 30 years ago, working mostly front-of-house positions in the DC area, Atlanta, and New York. In 2006, he arrived in Louisville to work in management for the Brown Hotel and eventually moved on to the Downtown Marriott.

Guy’s luxury hotel and fine dining experience elevate the menu at Brasserie Provence, available in the dining room, on the patio, and for Provence-to-Go curbside takeout. On Mondays, bottles of wine are 50% discounted. The “5-star” Red Ruby Trout is prepared with a white wine lemon almond shallot caper butter sauce and served with herb fingerling potatoes and haricots verts. The dish is a tribute to Guy’s memories of fishing for trout with his father in France. Cast Iron Mushrooms are sourced from Franklin County’s Frondosa Farms and the Lettuce salad from Groganica’s Commercial Aquaponic Farm in Louisville. Other menu highlights include the French Onion Soup, Hors d’Oeuvres Mélange of Charcuterie and Fromages, Prime Pork Chop, and sides of Gratin Dauphinois and Ratatouille.

Brasserie Provence gives back to the community through APRON, Inc. and Dare to Care Food Bank.

At Simply Thai, you can eat like royalty. Chaveewan Saing’s grandmother cooked for the King of Thailand. Those recipes were handed down to Chaveewan, who came to the US as a refugee. Chaveewan’s Burmese husband Mahn was also a refugee. Chaveewan began cooking her recipes at Amazing Grace Whole Foods & Nutrition Center and s a former owner of Bangkok Buffet. (Her sister Chavantee Snow owns Thai Café in Holiday Manor.) Simply Thai first opened on Wallace Avenue in St. Matthews in 2006, and also provided sushi for sale at Rainbow Blossom Natural Food Markets. After several years working in the family restaurant along with older brothers, Jade and Gene, Jeff Saing and his wife Kelly opened their Simply Thai Middletown location in 2012. They preserve the same family and traditional Thai recipes.

While still in college at the University of Louisville studying Marketing, Communication, and Entrepreneurship, Kelly drew up business plans for Simply Thai Middletown and worked part-time at UPS. The three Saing brothers worked full-time at the restaurant. In addition to a strong work ethic, food made from scratch and made to order sets Simply Thai apart as they are able to adapt any of their dishes to dietary preferences, needs, and restrictions, and adjust spice levels to each customer’s taste.

Kelly recommends the Spicy Beef Salad. Other popular menu items are the national dish of Thailand Pad Thai, Pineapple Fried Rice, Pineapple Curry, and Mango Salmon. The Saings wish to thank the community for their overwhelming support and extra generous tips to servers. Simply Thai Middletown has not had to lay off a single employee during the pandemic. “We are very blessed with everyone reaching out,” says Kelly. “It has been a humbling experience.” Simply Thai Middletown has made private food donations through Norton Healthcare and Scarlet Hope in Louisville.