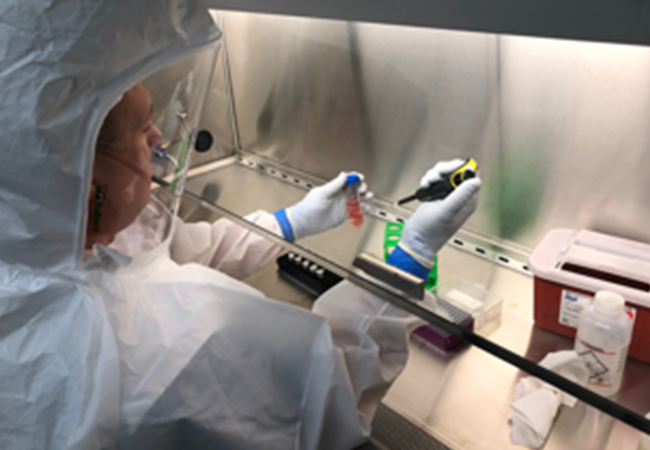 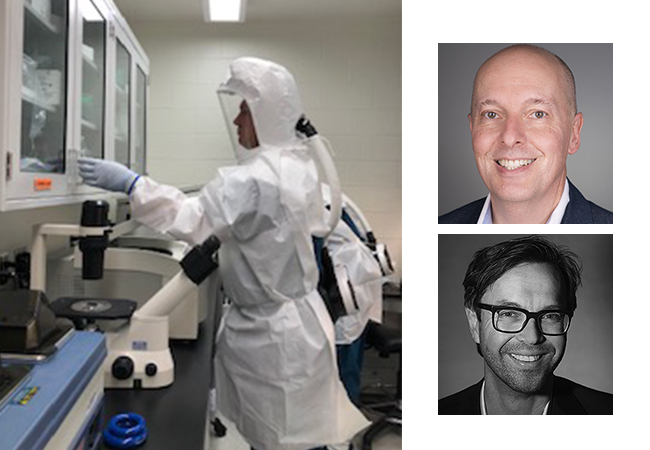 On April 15 during one of his daily coronavirus press briefings, Kentucky Governor Andy Beshear introduced University of Louisville President Dr. Neeli Bendapudi who announced to the statewide and social media audiences the extraordinary partnership behind the Co-Immunity Project. Governor Beshear began by describing three key elements of the project: 1) comprehensive antibody testing of healthcare workers, 2) lab identification of subjects with significant antibodies present and with strong, neutralizing antibodies for plasma donation, and 3) a donor plasma pool used to treat the most serious COVID-19 patients. Dr. Bendapudi went on to explain the associations involved in making the Co-immunity Project possible. With the coordination of Kentucky state government, Louisville Metro Government, and the University of Louisville’s Christina Lee Brown Envirome Institute, The Louisville Healthcare CEO Council (LHCC) has brought together three major hospital systems: Baptist Health, Norton Healthcare, and U of L Health “to leverage all of the research capabilities of the University of Louisville. From our Center for Infectious Diseases to our Center for Predictive Medicine, which has one of only twelve level three BSL (BioSafety Level, Pathogen/Protection) labs.”

According to their website, LHCC formed in 2017 “to solve important problems that extend beyond the scope of any one single member company.” The board includes CEOs from more than a dozen healthcare, health education, health insurance, and pharmaceutical companies totaling over 400,000 employees and $100 billion in revenue. LHCC President & CEO Tammy York Day is also a board member and granted us access to a couple of the Co-Immunity Project’s central players. Leader in “research translation” between the clinical science team, LHCC, and funders and community influencers, Ted Smith, PhD is Associate Professor of Environmental Medicine and Deputy Director of the Christina Lee Brown Envirome Institute at the University of Louisville School of Medicine, led by Dr. Aruni Bhatnagar. Cedric Francois, MD, PhD is on the LHCC Board of Directors as Co-Founder & CEO/President of Apellis Pharmaceuticals.

According to Ted, the Co-Immunity Project aims to first test healthcare workers in the Louisville area and then extend that work into the broader community. That second phase will provide essential information about the number of residents who are currently or have been infected. The only way to get a reliable estimate of these infection statistics is through random sampling of how many people that is truly representative of everyone in the community.. Phase I has already begun with testing of healthcare workers for viral infection and antibodies. In both phases, those who test positive for current infection are referred to Metro Health (or other county and state health agencies as the program is rolled out through the state of Kentucky) for contact tracing and to address any additional related public health concerns. Confirmed presence of antibodies, high levels of antibodies, and strength of antibodies will help identify those whose plasma can be used in treatment of COVID patients. These results should provide an estimate of herd immunity, so pivotal to reopening business and society, and make possible future “hot spot” precision interventions.

With all the talk of how much or how little testing is happening and whether there is a dearth of testing supplies in the United States, Ted emphasizes instead the Co-Immunity Project’s focus on the right kinds of testing, who is being tested, and how we test. The swab test for active infection indicates the presence of infection and its viral load, or quantity of infection. Blood drop and plasma testing for antibodies measures the presence and concentration of antibodies for future treatments or to determine resistance. The Co-Immunity Project is the first of its kind in the nation to employ truly random sampling and this testing approach could be  applied to all other states to adopt as well. Through the month of April, Germany had been the only other country undertaking broad, random sampling. When asked what message he has for our readers, Ted says, “If asked to participate in the Co-Immunity Project, please do. It will help our community today and tomorrow. We also ask that you let your elected officials and other civic leaders know that public health treatment and detection projects like this are worthy of their support and leadership.”

Cedric Francois came to the US from Belgium in 1999, sold his biotech firm in 2009, and then founded Apellis Pharmaceuticals, described as “a global biopharmaceutical company leveraging courageous science, creativity, and compassion to deliver life-changing medicines.” He characterizes the Co-Immunity Project as establishing and building the “state of immunity of the state of Kentucky” or a “virus radar” to safely open businesses and society and very quickly detect outbreaks. “The virus will re-emerge. There is no doubt about that - zero.” But he is confident in the University of Louisville and these three hospital systems who have “locked arms” in this “cutting edge, world class effort” to keep hospitalizations under control and reduce mortality.

Whereas retroactive contact tracing involves investigating who might have come in contact with an infected person, Dr. Francois explains that the Project requires a “volunteer army of tracers” for prospective tracing which tests wastewater to track outbreak pockets. He also encourages donations to the Co-Immunity Project through the DONATE NOW button on the home page of co-immunityproject.com. “This unprecedented collaboration of the public and private sector has already secured private donations of $1.75m in the form of a challenge grant to build a community-wide coalition of philanthropic support, and your donation will allow the program to scale more quickly and save more lives.” Dr. Francois has been impressed at the level of awareness and commitment he has seen across the Commonwealth. “You should be proud. This sense of community makes Kentucky very special.”

An informational FAQ section and the Executive Summary are available at co-immunityproject.com.

“If asked to participate in the Co-Immunity Project, please do. It will help our community today and tomorrow. We also ask that you let your elected officials and other civic leaders know that public health treatment and detection projects like this are worthy of their support and leadership.”

- Ted Smith, PhD, Associate Professor of Environmental Medicine
and Deputy Director of the Christina Lee Brown Envirome Institute at the University of Louisville School of Medicine