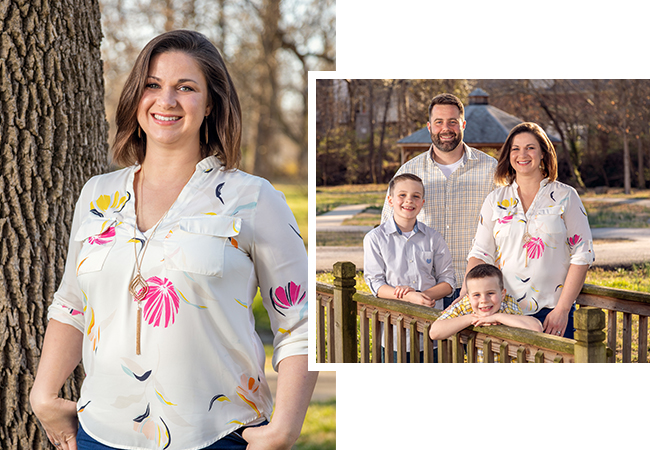 Louisville native Stephanie Sturgeon graduated from Ballard High School  where she met her husband, Matt, during their junior year. They would go on to build a life together with successful careers and two fine sons, Ben (10) and Dylan (7). Stephanie earned an Associate’s in Nursing at EKU in 2004 and her Bachelor’s in Nursing from McKendree University in 2011.

She has worked full time at Baptist Health since 2007, quickly working her way up to charge nurse and is currently a Medical Staff Quality Analyst. She has also worked part-time for CSL Plasma since 2000, starting as a phlebotomist during college and as a nurse since 2004.

While she acknowledges how tough the nursing profession can be in terms of dealing with emotions while maintaining professionalism, Stephanie appreciates how well-respected nurses have become for their passion and skill in serving others. She values being directly involved with colleagues in “making Baptist the best it can be.” Stephanie enjoys “seeing the how and why of policy and procedure” development, and as a self-described “data nerd” she enjoys putting little pieces together into one big picture. Thankfully, work/life balance is valued at Baptist which ensures Stephanie, as parent and PTA President at her boys’ school, does not have to miss important school functions and is able to pick her boys up at the end of the day. “Every day I can’t wait to see their faces when they walk out of school.”

In fact, her sons serve as Stephanie’s inspiration in many ways. Older son Ben “is a kind, gentle soul” who is very inquisitive, engages in deep conversations, and loves playing soccer.  Younger son Dylan is funny, asks random questions, and always comes up with amusing hypotheticals, often involving dinosaurs. Stephanie hopes to inspire them that, if they explore multiple interests and keep trying, they can do anything. In Matt and Stephanie’s home their sons are taught, “Being kind is a way of life. We accept people for who they are. Family is most important.”

As if work and family were not enough to juggle, Stephanie manages to serve as a Kentucky Derby Festival Marathon Ambassador, was named Ambassador of the Year in 2016, and has served on the Executive Ambassador team since then. “Being an ambassador means that I get to promote the race, and share training tips, discount codes, and excitement with other runners. She began running in 2013 and has set a goal of running a half marathon in every state. With over 30 half marathons under her belt, she has run in eight states so far, four of those with her husband. Stephanie is also co-chair of the specialties unit of the Kentucky Derby Festival Parade.

The NeXtGen program Stephanie is involved with through the Fund for the Arts is a nationally recognized program “preparing the next generation of emerging professionals for volunteer leadership roles within the arts community.” The NeXtGen Board she is on “helps to develop this program through mentorship on projects and participation in social events throughout the year.” Stephanie is a volunteer usher with Actors’ Theater of Louisville and takes full advantage of the accompanying perk of being exposed to many wonderful productions.

Stephanie also makes sure to carve out time for date nights with her husband and girls’ nights with friends. Stephanie admits that if not for her husband Matt, she would not be able to accomplish all she does. “He is an amazing father, kind husband, and I love having him as a partner.” Her mother has also been a huge inspiration, “by showing my sister and I how to love big, participate in the community, and do as much for others as possible. She has been a role model all my life, especially on how to be a SuperMom.”