TIME FOR A WALK IN THE PARK 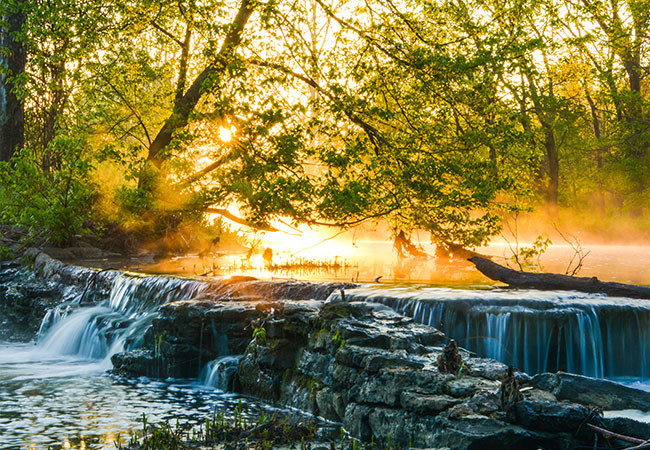 In these uncertain days, when we are under so much stress, and there are so many things that we cannot do, it’s important to lean into the things that we can do, and find solace wherever we can. Even though it’s a different time than any of us have ever experienced before, Spring is still here. If you can, it’s imperative to get outside and try to let the clear air give you a clear mind to match. If there was ever a time to get out and go for a walk, it’s now. Sunshine is still free and available to all.

A simple walk around your neighborhood might be nice, or perhaps you will need to get a bit farther away from houses and powerlines to find some peace, somewhere where the majesty of nature is a bit closer and more comfortable to take in. Now is a tremendous time to take in our spectacular Louisville Park System, which includes over 100 parks in total. It’s truly an embarrassment of riches, with several parks designed by the legendary landscape architect Frederick Law Olmstead. The glorious flagships of those stunning achievements include Cherokee Park, Iroquois Park, and Shawnee Park, all of which are spacious enough that you can forget your troubles and feel at one with Mother Nature as the days grow warmer and longer.

If there was ever a time to get out and go for a walk, it’s now.

When I was a kid, I lived on Broad Run Road out by the county line. It was quiet and a tad prosaic, with nature all around that was beautiful to behold, but still wasn’t easily accessible. It was all a tad too rural to include anything one might think of as a park. It’s impressive to see how it’s changed out there, as that road now leads you right into Broad Run Park. The approximately 600-acre municipal park was made open to the public in 2016 and features about 20 miles of trails for hiking, biking, and walking through lush woods, gorgeous meadows, and along streams. There are many dramatic views, even including a few waterfalls to behold. It preserves glorious natural space in southeastern and eastern Jefferson County.

Broad Run Park is the last part of the vast Parklands of Floyds Fork project. While the parklands are pretty new, Floyds Fork is not- This tributary stretches 62 miles through Henry County, goes right through eastern Jefferson County, then flows into the Salt River near Shepherdsville in Bullitt County. It was named for John Floyd, an early settler of St.Matthews who had many adventures in our region during the 18th century. The Fork was named for him after he died in a skirmish with a native tribe in 1783, capping off a remarkable life full of discovery and trailblazing.

The Parklands Project began in 2010 and has been led by a group called 21st Century Parks. Driven by donor support, this effort helps to protect Floyds Fork, which has remained very environmentally uncompromised over the centuries that passed since its discovery. Several separate parks across more than 800 acres make up the full, mammoth scope of the project. The parks are connected by The Strand, which, while not a park per se, includes the Louisville Loop for bikes and hikes and makes for great boat rides down the length on the Fork.

Not far from Broad Run Park, Turkey Run Park sits. It includes miles of trails for biking and hiking, some of them quite rugged for the more adventurous among us. There are even streams for paddling if you’re really ready to experience the great outdoors. Pope Lick might be best known for the legendary Pope Lick Monster, but the Pope Lick Park is sure giving him a run for his money. Featuring the relaxing Trestle Point and the Big Beech Woods, this is the perfect place for a leisurely stroll to clear your head. Beckley Creek Park features fishing at William F. Miles Lakes, as well as the lovely 22 acres that comprise Egg Lawn. It’s easily accessible via the Gene Snyder Freeway in Middletown, right across from Valhalla Golf Course.

Speaking of golf, local golf courses are still an oasis of calm distraction and laid back fun. “Golf has always been a way that people can get out of the house and get away from stress,” says Steve Shafer, Director of Golf at Persimmon Ridge and Polo Fields Country Clubs, who has a major passion for the game and enjoys sharing it. “Golf isn’t just a game; it’s a lifestyle. You can play it your whole life, and it keeps people young, active, and sharp.” Steve shared that golf courses around the country have been sharing ideas to keep players safe, like eliminating the need to come indoors for check-in, as well as raising the cup liners.

Something else Steve said was very salient for our times. “One of the things that I like about golf is that people police themselves. As you play, you follow the rules for the sake of the game. It embodies all the values that I want people to have; respect for tradition, the rules, one another. Golf is something that you can go outside and do, and you will feel better for having done it. It can bring you calm and peace.”

Sounds like solid advice. Now, let’s go outside and play.