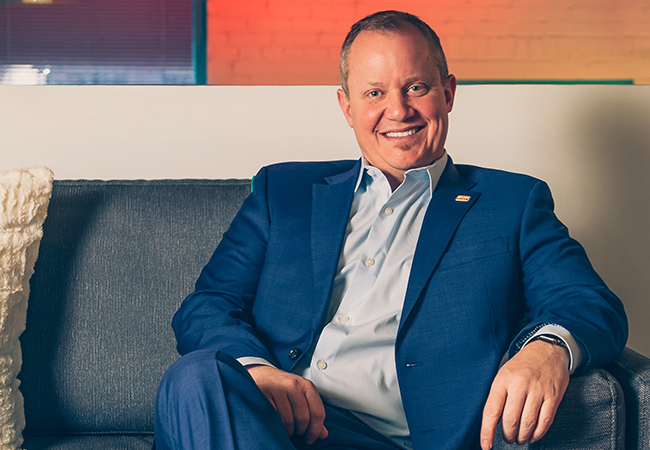 In October 2019, Matt Gibson was named President & CEO of the Kentucky Derby Festival, succeeding Mike Berry who retired after 33 years with the Festival. In fact, Matt Gibson was Berry’s first hire in the late nineties. Formerly a firefighter with the Jeffersontown Fire Department, Gibson started with KDF as an events manager. He was promoted to Director of Operations in 1999, Vice President of Events in 2003, and Senior Vice President of Events in 2015. Although the Kentucky Derby Festival Board conducted a nationwide search, they ultimately filled the position in-house. Gibson’s love, passion, and vision for the organization were undeniable. With his considerable experience, he demonstrated a clear understanding of the financial and operational challenges and had already established many relationships necessary to putting on a festival of such magnitude, entertaining and involving more than 1.5 million people annually. “We are an events production company at our core.”

So, what does it mean to the Festival and the community to have a new KDF President & CEO after more than two decades of Mike Berry’s leadership? Because of their friendship and close working relationship, the transition with Matt Gibson has been relatively comfortable for the staff of 23. Gibson sees it as an opportunity to continue the growth of the springtime celebration and looks forward to working alongside the board, sponsors, staff, and volunteers to ensure the Festival is around for another 65 years. In fact, a large-scale qualitative and quantitative research study of the Kentucky Derby Festival is in the works. Matt Gibson feels a responsibility to ensuring all participants are heard. He intends to use the data from this project to improve upon the success of the more than 70 Festival events.

When asked about specific changes he plans to make in existing events, Gibson teases big ideas he is developing with Wayne Hettinger for his personal favorite event, Thunder Over Louisville. With continued development of, and improvements to, Louisville park systems, green spaces, and roadways, Festival goers may notice enhancements to other favorite events (but those are being kept under wraps for now). Gibson shared what he feels are the most underrated KDF events, the silly and the serious: Great Bed Races and Spelling Bee. He enjoys all the laughter and smiling brought on by the antics of the bed race teams, and is always impressed by the sheer intelligence of the kids participating in the Spelling Bee.

Honoring tradition and evolving with changing times is a delicate balance, one Matt Gibson is reminded of with a glance at a framed picture on the wall of his office. One of the first posters of the Kentucky Derby Festival Parade, it shows the parade held at nighttime and running in the opposite direction on Broadway. Gibson believes in collective brainstorming and dialogue and the importance of asking, “What are we too attached to? The real work comes in taking it from the white board and putting it into action.” But, he goes on to say, “Given enough time, we can accomplish anything.