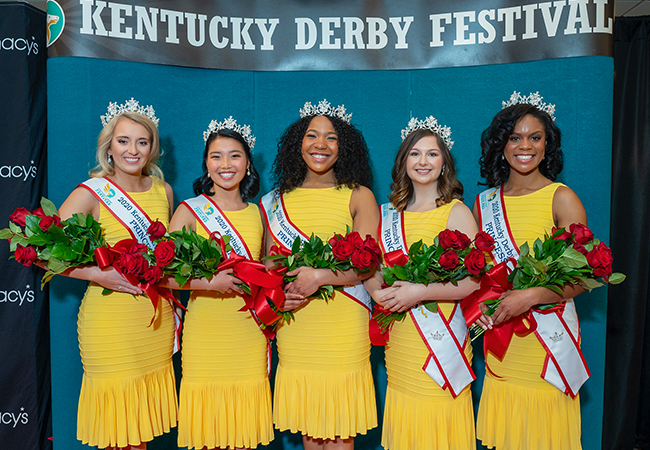 The first full week of this new decade was pretty amazing for five young women, because on the morning of Monday, Jan. 6, they were officially introduced as the Royal Court at a ceremony held at Macy’s in Oxmoor Center.

Hannah is a junior at Bellarmine in her hometown of Louisville, where she is studying business administration and marketing.

Molly is a senior at Bellarmine University in her native Louisville, double majoring in communication and in design, arts and technology.

Leah is from Lebanon, Kentucky. She’s a sophomore at UofL with dual majors in political science and in liberal studies with concentrations in race/gender studies, global public health, and in economics.

Hannah Maria Edelen, 21, is from Springfield, Kentucky. A senior at Northern Kentucky University, she has dual majors in history and in communication studies with a minor in organizational leadership.

Giavanna is a junior at the University of Louisville in her hometown, where she is majoring in psychology with a minor in Pan-African studies.

As members of the Royal Court, these five young women are Derby Princesses. As ambassadors for the 2020 Kentucky Derby Festival, they will attend almost 70 events over a two-week period.

Grace Rahman of Lexington, a UofL post-baccalaureate student entering med school in the fall, was chosen as first alternate. Abigail Frazier of Whitesburg, a senior at UK, is the second alternate. They will become a Royal Court Princess if one of the other women is unable to serve.

Eligible candidates for the Royal Court are single female residents of Kentucky or Southern Indiana, full-time college students in at least their second year of college who maintain a minimum 3.0 GPA; they also have a knowledge of the Derby Festival, and are involved with their campus and community.

“Each year, the members of the Royal Court become inspirations for future generations,” Jeff says, “helping us continue a tradition that dates back more than 60 years.”

Tickets are $250 each or a VIP table of 10 for $3,000, available at KDF.org.
Portion of proceeds benefits Kentucky Derby Festival Foundation.