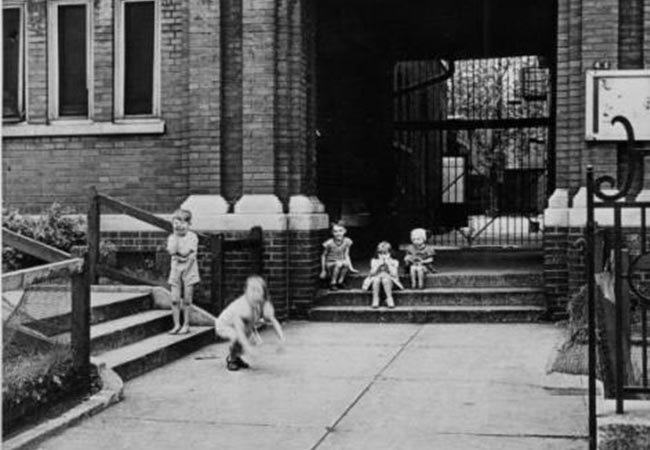 April 15, 1872 in Macon, Mississippi, the eldest of five daughters. Her father, Samuel Augustus Tarrant was a Civil War veteran and merchant. Her mother, Eliza Watkins Selleck, descended from Revolutionary War Captain James Selleck of Connecticut and came from a wealthy family who owned cotton plantations in Macon, Mississippi, and Huntsville, Alabama. The Tarrant family moved to Louisville some time in the 1880s, where Eliza kept a boarding house. Eliza opened another boarding house in Chicago after the family’s move there around 1900 in support of the daughters’ education.

Ellie Tarrant has graduated from Louisville Female High School and then studied botany at Indiana University from 1892 to 1893. She continued her studies in the summers of 1894 through 1902 at the University of Chicago while teaching Latin full time at her high school alma mater during the regular school year from 1893 to 1902. She was a Teaching Assistant at the University of Chicago in the summer of 1902 and 1903. During her time in Chicago, Ellie was inspired and influenced by the social work and urban reform of Jane Addams, who founded Hull House in 1889, and Presbyterian minister Archibald Hill, who had worked in Chicago settlement houses and would go on to establish Neighborhood House in Louisville in 1897.

Ellie became Head Resident/Director of Neighborhood House in 1902, primarily serving Russian Jews who had fled anti-semitism. Services included early childhood education, English teaching, tutoring, nursing, vocational training, and a library. Ellie left her position in 1905 to marry the Reverend John Little III. John Little was born in 1874 in Tuscaloosa, Alabama, where he would go on to attend the University of Alabama. He then studied at the Louisville Presbyterian Seminary, where he also ran a Sunday school for African-American children, and was ordained in 1899. John founded the Presbyterian Colored Missions in Louisville. Ellie and John would have two children together, Elizabeth Tarrant and John Little IV.

In November 1905, shortly after her marriage, Eleanor Tarrant Little attended the Kentucky State Conference of Charities and Corrections where she was lauded for her tenure at Neighborhood House and introduced as “the one who has maintained a lighthouse in the darkest district of Louisville.” Renowned as highly educated and a gifted speaker, she addressed the conference regarding the plight of child labor, “Every man and woman in this audience is clad in garments which in some way have passed through the hands of little children.”

Throughout her marriage and the raising of her children, Eleanor continued associations and charity work for social justice causes. She was a member of the Louisville Woman’s Club and the Louisville Woman Suffrage Association. In 1907 “school suffrage”, which gave literate women the right to vote in school board elections and other matters of education, became the focus of the Louisville Woman’s Club. Law granting school suffrage was passed in the Kentucky General Assembly in 1912; and the Campaign Committee of the School Suffrage Association immediately reached out to include literate African-American women as well. Leading up to the school board elections of 1914, Eleanor spoke at the Colored Branch of the Louisville Public Library on the responsibility to increase school attendance “and that the colored high school be filled to overflowing. I don’t care whom you vote for as long as you vote.”