THE FILLIES: 50 YEARS STRONG AND GETTING STRONGER! 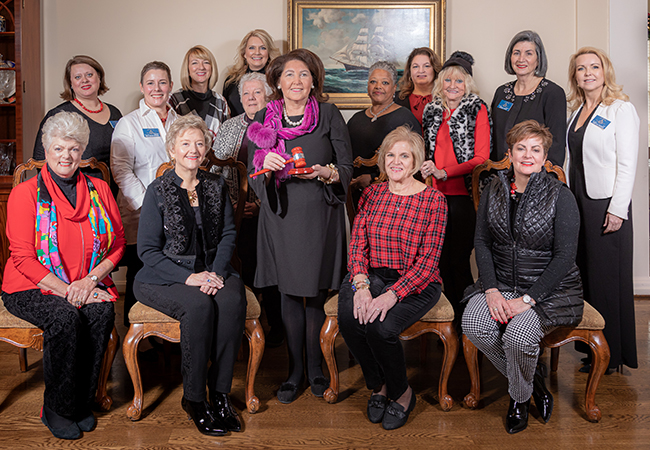 In January 1959, volunteer experts were needed for a new Derby event, a lavish ball that would include a ceremonial crowning of the Derby Queen. Frances Askew Davis, who had appeared in Life magazine the year before, spotlighting her fundraising efforts with the Younger Women’s Club, led 13 other women in planning the event. Their work was so valuable and appreciated, they became a social and civic entity of their own, the Fillies, and the gala became known as the Fillies Derby Ball.

Susan Meyer Moore is the 2019-20 president of the Fillies. She joined the organization in 1995 and has chaired 13 different committees as well as serving as vice president and president-elect.

Her mother, Mary Lou Meyer, was president in 1980. “Her love of the Fillies and Derby Festival definitely rubbed off on me,” Susan says. “I have several wonderful memories, including John Wayne walking in our backyard, seeing my mother photographed with dignitaries and celebrities while representing the Fillies, and riding in the Pegasus Parade, wearing the coveted Festival jacket. All of these wonderful memories inspired me to want to achieve the same, while giving back to our community.”

The Fillies Derby Ball, chaired this year by Julie Hinson, is Saturday, April 4 at the Galt House Hotel. This year’s theme is the Fillies “Pegasus” Ball, with special attendee Monte Durham. The 2020 Derby Queen will be chosen the same way she was in 1959, by the random spin of a wheel from the five young women chosen as members of the Royal Court.

Chaired by Pat Harrison, the 2020 Children’s Tea is Sunday, April 26 at the Crowne Plaza with the theme “A fairy godmother’s guide to being a prince or princess.” Over 300 children will meet the Royal Court and have a formal tea party.

Well over a half-million visitors to Louisville will be keeping up with all the Kentucky Derby Festival goings-on throughout the entire month of April thanks to the guide published by the Fillies. Chaired by Cindy Lewandowski in 2020, the Official KDF Program is 100+ pages filled with event details.

Tabitha Rhodes chairs the Royal Court Float, which will be in the KDF Pegasus Parade on Thursday, April 30 on the parade route down Broadway. The Weber Group in Sellersburg, Indiana, is sponsoring the refurbishing of the beautiful Fillies float.

Each year’s president of the Fillies takes over leadership with certain goals for the year. “I have truly wanted to inspire and energize our organization this year,” Susan says. For example, each meeting has had a theme, like “Fillies Fiesta” in September and the November general meeting “Fillies at Tiffany’s,” which included a fashion show and 20+ local shopping vendors. “Our January meeting will be a “pink out” as we celebrate and introduce the 2020 royal court to our organization,” Susan says. “I am excited for the future of our organization and the new leadership of KDF CEO Matt Gibson. Our commitment to community service and engagement truly sets us apart.”

For ticket info to any event and for anyone who is interested in becoming a member of the Fillies, please reach out to Susan Meyer Moore or any other board member at fillies.org.