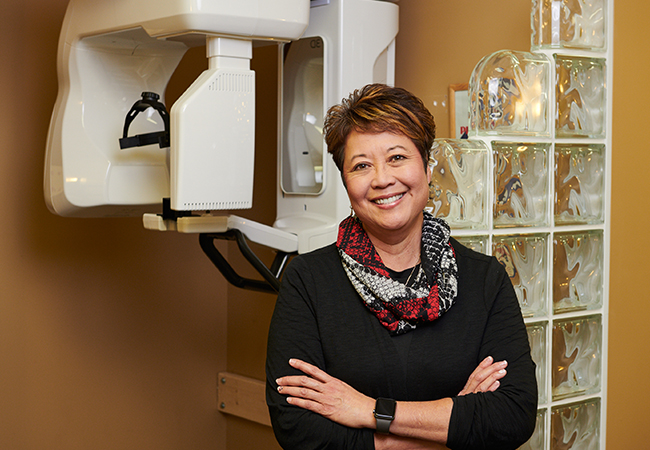 With two dental practices in Kentucky, Signature Smiles in Louisville and Designing Smiles in Frankfort, Dr. Arlene Baluyut can’t help but laugh a little when asked about her work/life balance. While this clearly presents a challenge, she faces each day with a passion for life, as she has for herself and her family over the full course of her career. Dr. Baluyut and the two new associates who have recently joined her practices rotate between the two locations. Dr. B, as her patients fondly refer to her, is passionate about improving her patients’ smiles and, by extension, their confidence, self-esteem, and overall health. Running the two dental practices is demanding, especially considering her dedication to staying on top of new techniques, technology, and equipment options. Dr. B depends on Operations Director Lisa Materna as her right hand, tasked with achieving business objectives and creating an office culture that promotes staff commitment to her vision and mission. Lisa keeps her organized and on schedule with the many demands on her time and talent.

For a closer look into how this business owner, career woman, and SuperMom has managed to juggle it all for 34 years, we begin with her own upbringing. Dr. Arlene Baluyut was born and raised in Manila, Philippines and lived there until the age of nine when she and her family immigrated to the United States. She witnessed the hard work of her parents, who strove to give their children an opportunity for a better education and life in the USA. Her parents’ dedication to serving humanity in healthcare inspired her eventual career choice. Her father was a urologist and her mother was a nurse. The family lived in Chicago before they moved to Marion, Indiana and then settled in Peru, Indiana where she attended high school and graduated in 1978. As bright as she was as a student, she was equally as gifted in athletics, playing basketball, tennis and volleyball. She attended the University of Kentucky on a tennis scholarship. However, her good friend, UK men’s basketball All-American point guard Kyle Macy, and his father convinced her to play as a walk-on for the UK Lady Wildcats.

Dr. B played on the University of Kentucky women’s basketball team for two years until she tore her ACL. Following her knee injury, she threw herself into her pre-med/pre-dental program and was accepted into the University of Kentucky College of Dentistry after only three years of undergraduate studies. She ultimately chose dentistry because she loves not only the science, but the artistry involved. After graduating dental school with highest honors, she did a general practice residency and became the chief resident at the UK Chandler Medical Center from 1985-1987. She raised three children: Ryan (32), Kellie (30), and Logan (27). As dedicated as she was to the development of her career, Dr. B was determined to balance that with continuous involvement in the lives and interests of her children.

Dr. B and her children were active in the YMCA; and she coached each of her children in youth sports leagues, including basketball, through their freshman year. She coached basketball in the Amateur Athletic Union and at Franklin County High School. Her daughter’s high school team won 3 state championships. Dr. B continued coaching basketball in UK Club Team Level Sports, winning an NCBBA Championship with her daughter on the team.

Dr. B’s oldest son, Ryan, now works for the NBA team, the Golden State Warriors, and her daughter, Kellie, is an event planner in San Francisco. Her youngest son, Logan, is a captain in the Air Force and a dentist stationed at Andrews Air Force Base. Getting the whole gang back together is no easy feat. But when they do, they enjoy sports, the outdoors, and travel. Dr. B also serves on the board of the YMCA at Norton Commons and teaches children’s liturgy at St. Bernadette’s Catholic Church. She lives by the motto “Work hard. Play hard.” Her sons and daughter are surely following in her footsteps. As Ryan, told us, “Mom gave me an invaluable model for work ethic and undoubtedly has been my bridge to the game of basketball. I am living the dream she helped shape. I could not be more grateful for her instilling that passion.”