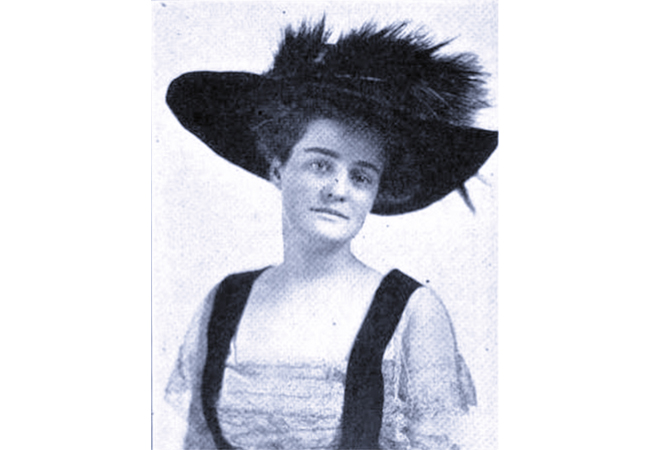 Julia Blackburn Duke was born July 23, 1875, the youngest of five children and only daughter to Civil War Confederate Brigadier General Basil Wilson Duke and Henrietta Morgan “Tommy” Duke. Her father was born in Georgetown, Kentucky and eventually practiced law in St. Louis, Missouri. With the start of the Civil War, he enlisted as a Second Lieutenant in the Lexington Rifles under the command of Tommy’s brother, Brigadier General John Hunt Morgan. As a Colonel with the 2nd Kentucky Cavalry, Wilson was captured in the raid into Indiana and Ohio. In 1864, he was promoted to Brigadier General and served in southwest Virginia. As the war ended, he was with the party that accompanied Confederate President Jefferson Davis in his infamous attempt at escape with the Confederate treasury. As fans of the History Channel show “Civil War Gold” will recall, legend has it Jefferson Davis managed to abscond with and hide wagons full of gold bars and coins before being captured by Union forces, despite being disguised as a woman.

Julia’s great great grandfather was Colonel Thomas Marshall. He was a land surveyor and colleague and close friend of George Washington, High Sheriff of Fauquier County in Virginia, and superintendent of the Lord Fairfax estate. He was also a lieutenant in the French & Indian War, member of the 1776 Virginia Convention, and organized the Culpepper Minutemen. He served under his friend George at Valley Forge and became 3rd Virginia Regiment commander at the Battle of Brandywine. The Colonel would be elected to the Virginia legislature representing an area that lies in present-day Kentucky. He died at Federal Hill, his son Captain Thomas Marshall, Jr.’s home in Washington, Kentucky.

Julia’s great uncle, and another of Colonel Thomas Marshall’s sons, was the Great Chief Justice John Marshall. John was a young officer under George Washington, elected to Congress in 1799, selected as Secretary of State by John Adams in 1800, and appointed to the Supreme Court in 1801. His decision in Marbury vs, Madison established the doctrine of judicial review and is seen as the foundation of judicial power in the United States.

A graduate of Bryn Mawr College, Julia married investment banker Samuel Cowan Henning in June of 1897. They lived with their four children at Cold Spring, the former home of Abraham Lincoln’s closest friend Joshua Speed and his wife Fanny Henning. Fanny was Samuel’s aunt and Julia’s brother Calvin Morgan Duke had married into the Speed family. Julia and Samuel remodeled and made several additions to Cold Spring over the years. It stands today as one of the most expensive homes in Louisville, retaining its historic character despite many unusual enhancements and unfinished renovations. Cold Spring was last listed at $7 million dollars; but that listing was removed on December 4, 2019.

Julia was a trustee and executive committee member of the Frontier Nursing Association in Wendover, Kentucky and a member of the Episcopal Church of the Advent, the Filson Club, and the Arts Club. She was Congressional Chairman of the Kentucky Equal Rights Association and a leader in the women's suffrage movement. Julia was a founder of the Louisville League of Women Voters, elected its first president in 1920, and attended the national convention in 1923. The Courier-Journal quoted Julia at that time as follows: “I firmly believe that the courage of women throughout the United States, who are intelligently facing their responsibility to the franchise, will bring results in marked progress along many lines.” Julia remained involved in civic and political affairs throughout her long life.