A TWIST OF PINK 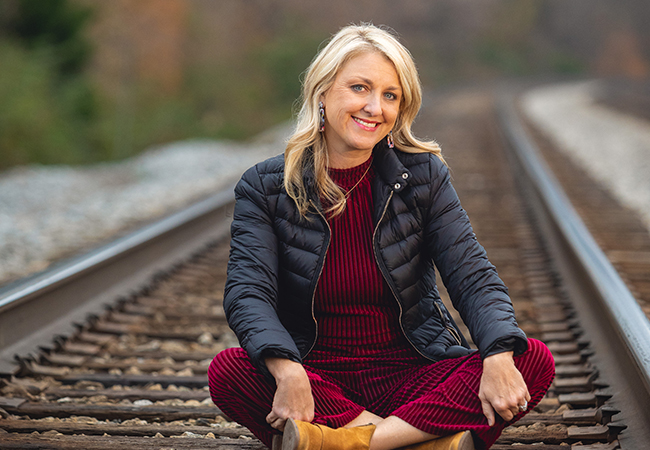 Caroline Johnson was in “complete shock” by her diagnosis of Stage III breast cancer right before she turned 40 in June 2013––after all, she had a baseline mammogram a year and a half prior. But, when she felt a lump on her left breast, her doctor immediately ordered an ultrasound and biopsy. “That started my whole journey of breast cancer,” says Caroline, founder of Twisted Pink, a group whose mission it is to fund Stage IV or metastatic breast cancer research.

After Caroline was diagnosed, doctors persuaded her to have a lumpectomy, but unfortunately the margin was not clear of the cancer cells, so a week later she had a mastectomy on her left breast and a tissue expander was placed for reconstruction. Things got worse for her when doctors found that the cancer had spread into her lymph nodes. “It was devastating,” she says.

Caroline went through 19 rounds of chemotherapy, 28 radiation treatments and participated in a clinical trial until she ended treatment in February 2014. Caroline was hospitalized again for an infection in her tissue expander after her reconstructed breast became infected from the radiation treatments and had to be removed. She went without a breast for eight months and then had a tram flap reconstruction procedure to replace the failed tissue expander. Today, she takes daily medication that is working to prevent any cancer cells left in her body from growing on the hormone estrogen.

Caroline has learned a lot about the many stages of breast cancer in the past few years, including that her Stage III estrogen positive breast cancer has a 20 to 30 percent chance of recurrence. Metastatic breast cancer is different than other types of cancer; when breast cancer is diagnosed as metastatic, it has moved from the breast to other parts of the body such as the bones, liver, lungs and brain. It is an incurable disease, according to TwistedPink.org. The median survival rate upon diagnosis is three years and patients will be in treatment for the rest of their lives. “All along this journey, I met some amazing people and asked some difficult questions,” Caroline says. “I wanted to do more to fund research, educate myself and find what information is true.”

When Caroline founded Twisted Pink, her goal was to raise money for metastatic breast cancer research because only 7 percent of dollars were being directed to save the lives of those facing a terminal diagnosis. It is estimated that 155,000 people living in the U.S. have metastatic breast cancer and 40,000 of these will die each year. The name comes from a “twist” of the hot pink ribbon made popular by Estee Lauder’s Breast Cancer Awareness campaign. Caroline did not want her foundation to be “pink-washed,” where very little money goes to research. “A twist of the pink ribbon is more of what it should be … it represents a new growth. To change awareness into the cure,” Caroline says.

In 2017, together with Hope Scarves and The Cancer Couch Foundation, $600,000 was raised and with an anonymous 1 to 1 match a total of $1.2 million was directed to metastatic breast cancer research. In 2018, Twisted Pink created a private support group for individuals both living with metastatic breast cancer to receive support from their peers and breast cancer survivors to understand what it is like to live with cancer. The group is open to any stage IV patient or early stage survivors that share in the passion of advocating for Stage IV research, according to the website. A small grant from The Lexington Cancer Foundation will help this group continue to grow in 2020.

Since 2014, the program has raised over $1.3 million dollars for Stage IV breast cancer with the help of its Annual Twisted Pink Masquerade Ball, which has consistently raised hundreds of thousands of dollars every year for research. This year, the gala is Feb. 29, the “extra” day of the year to celebrate “another day” at the Hyatt Regency Louisville. Tickets are $200 and the theme this year is Monte Carlo Masquerade. The annual Dace Polk Brown Ambassador Award will be presented at the event to a person who supports and believes in the mission of Twisted Pink. “The event is meant to celebrate life and to raise much needed funding for metastatic breast cancer research.” Find out more about Twisted Pink at TwistedPink.org.