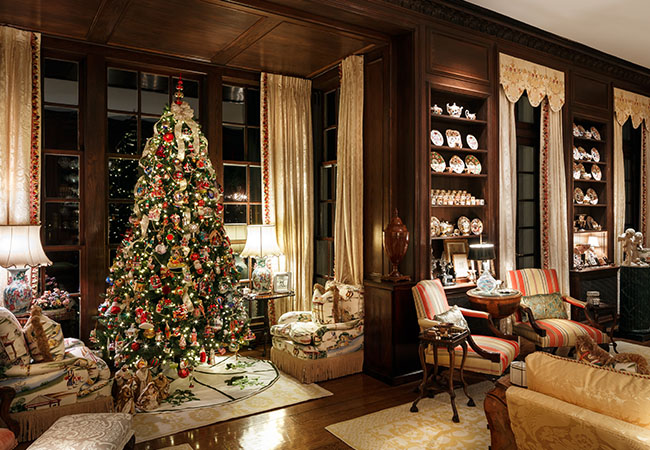 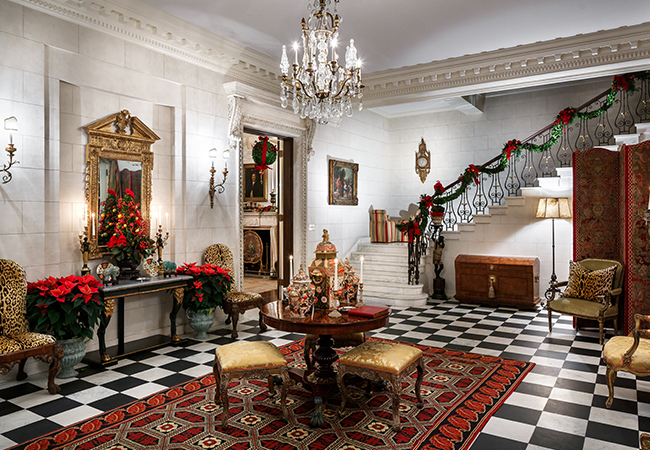 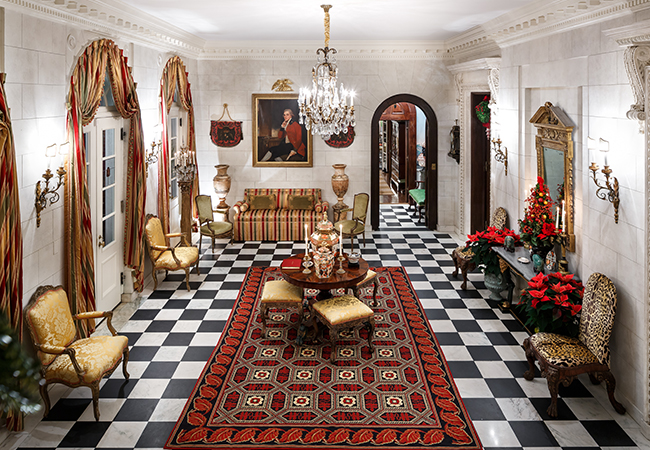 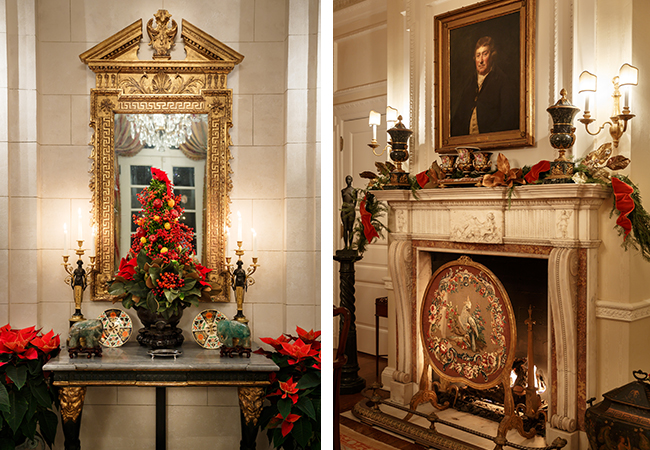 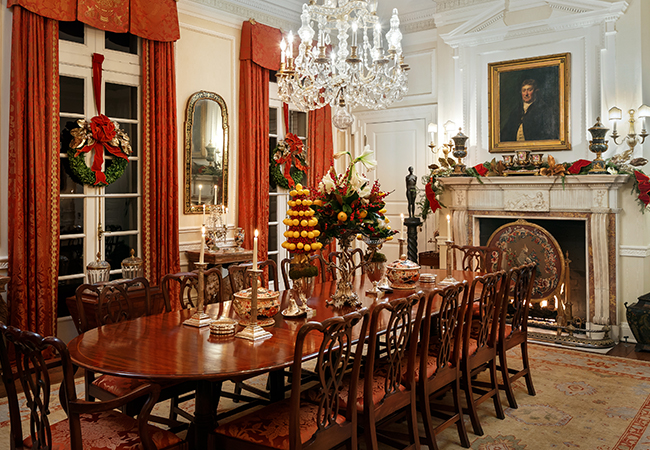 Holiday tradition is alive and well this season through the greenery and glow at Malvern House. Lee W. Robinson, owner of a national design company of the same name, lets his light shine throughout the rooms of this historic mansion.

Lee Robinson’s wife, Babs Rodes Robinson, and their children are the sixth generation of her family who have owned the home. In the 1800s, the property, which expanded at that time from River Road to Brownsboro Road (it totaled three square miles), was owned by Babs’ great-great grandparents George and Harriet Rogers Gaulbert. George was an entrepreneur and titan of the national ready-mix paint company Peaslee-Gaulbert Corporation. It was their daughter Carrie Gaulbert Cox and her husband, local businessman Attilla Cox, Jr. that built Malvern House.

Attilla’s father, Attilla Sr. was a business partner of J.P. Morgan in railroads and the founder of Columbia Fidelity Bank, now PNC bank, so he had ties to New York City. The Cox’s knew they wanted a fabulous home, so they contacted NYC architect Ogden Codman, who with Edith Wharton wrote “The Decoration of Houses,” a manual of interior design. He built homes for the Rockefellers in Terrytown, New York and The Breakers for the Vanderbilts in Newport, Rhode Island, so he knew grand homes. The Cox home in Louisville was Codman’s only home that he helped create outside of New England.

The home, now on 15-acres, was made possible by the internationally-acclaimed landscape firm of Frederick Law Olmsted. It was originally three floors with a hunting lodge room located on the third floor along with several bedrooms. Babs’ grandmother tore off the third floor in the 1960s. All of the original limestone block walls, marble staircase and panel rooms of the original designs are still present throughout the home, even after Lee’s family redid the home in 2007. Olmsted’s European marble wellhead from 1614 resides in the formal gardens, stained glass panels from the 14-1500s are embedded throughout the windows on the first floor and a Robert Adam Huntress Diana mantle piece from the 1700s is located in the dining room. The details make this home unique and, Lee says, he wanted to keep the time period of the original home as close as possible, like the tea paper on the walls and Steinway piano and keeping the Sloan and Company of New York wood in the paneled room. Lee insisted on changing the upholstery and furniture and tearing down the screened-in porch and creating a room mimicking the Winfield House in England. Lee also brought their oil paintings made by George Romney and Henry Raeburn (Royal Academy artists), as well as pieces from Anthony van Dyck, Claude Lorraine, Pablo Picasso and more of his extensive art collection. “We have to have certain pieces, but I wanted us to be able to flop down with a drink and enjoy company,” Lee says about his family of five.

For Christmas, Lee is in his element when it comes to design. He’s a real “proponent” of using live greens to keep the traditional Williamsburg decor historically correct. Lee uses boxwoods, fresh holly and garlands and red amaryllis to make arrangements and balls, all locally from St. Matthews Feed & Seed. “The smell is overwhelming,” he says. “At Christmastime, there’s nothing better than green with a pop of red.” For the tree, Lee ornaments the lavish timber with hand-blown Christopher Radko accessories. “I get a little carried away with it,” Lee laughs. He loves to entertain for Christmas Eve dinner, as he fills the first floor of his home with guests to enjoy the many fireplaces and candles and dinner in the ornate dining room. Christmas Day, however, Lee and his family enjoy just an intimate gathering of core members around the Christmas tree.

Lee’s company can make your home look fabulous, too. He’s “not a one-trick pony,” he says. He works with a lot of modern homeowners. His company does major renovations and interior design. He is a former banker, so when the company does a construction project, they’re “on time and on budget,” he says. “It’s all about the client.” He’s worked on projects all over the country but Louisville is his home. “It’s the only one-stop show in Louisville,” he says.