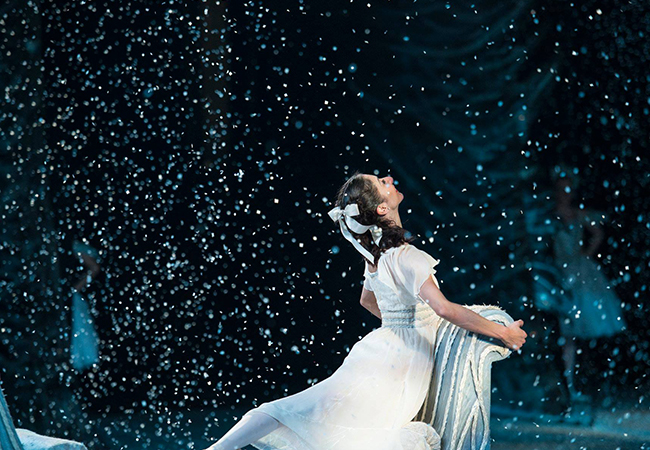 When it comes to the holiday season, many may think of a scrumptious spread, luminous lights and frequent family time, but in Louisville, the community can add an additional item to the checklist of winter tradition. The Brown-Forman Nutcracker Ballet is in its 11th year, performed by the Louisville Ballet who have completed 30 seasons of the holiday classic at the Kentucky Center for the Arts. Company dancer Emily Reinking O’Dell sat down with Tops to discuss why she thinks the holiday season is made more magical with the help of the Nutcracker.

Emily has been performing in the Nutcracker since she was in the second grade––three decades, so she’s a pro at, well, every character. Emily says she has a “personal connection” to the show. “There is excitement in it,” Emily says. “There’s new roles and new partners … it’s a holiday tradition for me, personally, and the community. There’s something for everyone.”

Lousivillians can appreciate the subtle 502 touches from the act, like the fountain at St. James Court, signs that say “Brown” and “Forman” and the character, “Mother Derby.” Emily says the production keeps children interested throughout the two, 45-minute acts due to the familiarity of the music and the magic of snow and sparkle. “They see the wonderment,” Emily says. “It stays with you. It truly is a magical show.”

The story of the Nutcracker follows a young girl named Marie who experiences a magical night through her dreams on Christmas Eve, following a lavish ball hosted by her parents. She falls asleep under the family Christmas tree with her Nutcracker doll. When she wakes up, the tree has gigantically grown, a prince greets Marie and she goes on an adventure featuring fairies, mice and other characters.

At the Louisville Ballet, there are five alternate casts of the company, which include 110 kids, so characters are changed for nearly every production. Two children, this year, know O’Dell fairly well; they’re her kids. Bella, 7, is an angel; and Maya, 12, has her first role as a “party girl.” Emily says seeing her girls perform is “full circle” for her. “Watching them love it so much … it’s just so special,” Emily says.

The children of the community, including from the Louisville Ballet School, began auditioning in August and practice early to learn the choreography to be able to dance with the professionals. “It’s stunning what they can do … and how much the community loves them,” Emily says. Company dancers will begin rehearsal in November. Production choreography is by Val Caniparoli, music is by Pytor Ilyich Tchaikovsky and sets and costumes are by Peter Cazalet.

The production is slated to open December 14 with nine public performances until December 22. Tickets went on sale in July with a record-breaking Christmas in July, according to Michael Jones Gomez, Marketing Coordinator. Fans should buy tickets now, according to Michael, before they sell out. Tickets are available at louisvilleballet.org, by calling 502-583-2623 or by coming to the Louisville Ballet.