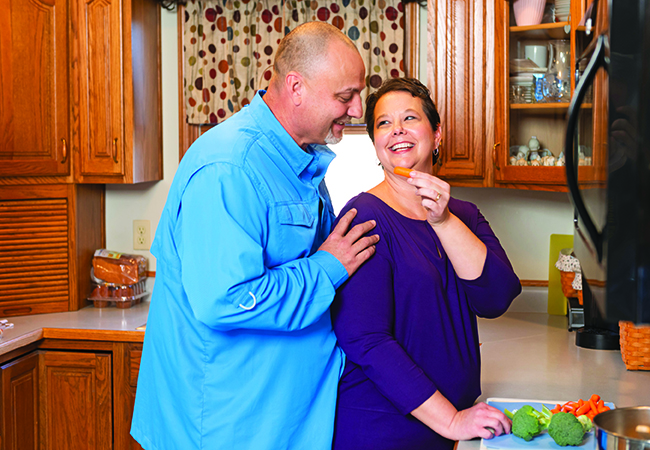 By receiving her care at Baptist Health, Kim remained close to her husband andfamily, wasn’t burdened financially anddidn’t have to take sick leave.

"We had big plans to start our empty nest,” says Kim. “My daughter, Kelsey, was head- ed to college and we had a cruise planned.”

But those plans for sun and sea were sidetracked when Kim Pinn- ick’s doctor found a lump in July 2017. She was immediately referred to Allison Hatmaker, M.D., breast surgeon, Baptist Health Louisville. It was Stage 2 ductal carcinoma. “It’s one of the worse things you can hear,” says Kim.

For the next 12 months, Kim’s life revolved around surgery, che- motherapy and radiation. “I had a great medical team that set forth a great plan,” says Kim.

“I got my chemo and surgery at the CBC at Baptist Health Louisville and my radiation at Baptist Health Floyd,” says Kim. “I was able to stay close to home, so I still got that hometown feel from everybody I encountered.” Kim described the environment as very welcoming, with nurses who are very con- cerned and caring. “Everybody I met had caring personalities and felt like truly cared about my out- come,” she says.

Besides, world-class treatment, Kim also had the comforts of home every day. “We had family and friends around us and during all the treatment,” says Kim. “Radiation is an all-day thing. People would come in and out: my husband, Keith, was my rock, my mother and stepfather, my husband’s parents, my son a couple times, my daughter when she was home from break – it made the day go faster.”

Kim continued to work through all her treatments and only took off a couple weeks after surgery and a few days when she was scheduled to re- ceive high doses of chemo. “Staying close to home made my life easier,” says Kim. “The 12-month experience would have financially put a burden on us if I would had to have traveled.”

When it comes to living through cancer, Kim counts her bright spots and those are the support she got from friends, family and her med- ical team.

“I love feeling good and having the energy to do what I want to do when I want to do it,” says Kim. “Baptist Health – the great care I got from my medical team – helped me get where I am today. Cancer free and feeling good.”