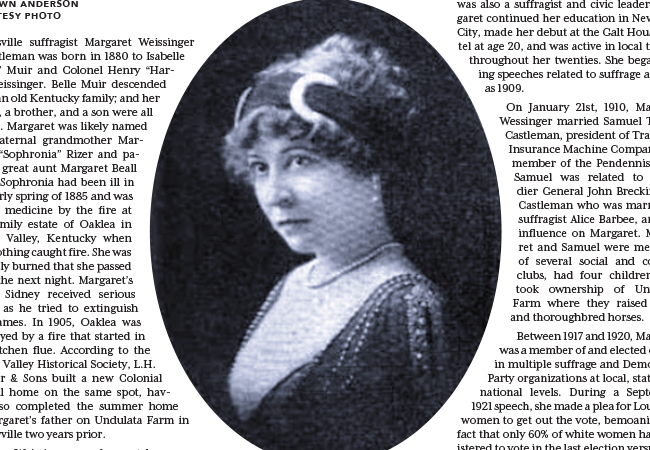 Across the country there is a growing movement to recognize noteworthy women and their historical contributions through public monuments. Unfortunately, less than 7% of the 5,193 monuments in the United States presently recognize women. We are about to change that statistic with the “Breaking the Bronze Ceiling” initiative. Each month TOPS will feature a Kentucky woman who impacted the Women’s Rights Movement. For more information visit breakingthebronzeceiling.com.

Louisville suffragist Margaret Weissinger Castleman was born in 1880 to Isabelle “Belle” Muir and Colonel Henry “Harry” Weissinger. Belle Muir descended from an old Kentucky family; and her father, a brother, and a son were all judges. Margaret was likely named for maternal grandmother Margaret “Sophronia” Rizer and paternal great aunt Margaret Beall Muir. Sophronia had been ill in the early spring of 1885 and was taking medicine by the fire at the family estate of Oaklea in Pewee Valley, Kentucky when her clothing caught fire. She was so badly burned that she passed away the next night. Margaret’s Uncle Sidney received serious burns as he tried to extinguish the flames. In 1905, Oaklea was destroyed by a fire that started in the kitchen flue. According to the Pewee Valley Historical Society, L.H. Gruber & Sons built a new Colonial Revival home on the same spot, having also completed the summer home of Margaret’s father on Undulata Farm in Shelbyville two years prior.

Harry Weissinger was born at home on family property, now site of Louisville’s Frederick Law Olmsted-designed Central Park. He served in the Confederate Army during the Civil War under the command of Major John Breckinridge Castleman and General Basil Duke, and returned to Louisville to become founder and president of the Harry Weissinger Tobacco Company and a founding father of the American Saddlebred Horse Association. Harry and Belle Wessinger had  six children, including Margaret. Oldest sister Blanche was accidentally shot and killed by an aunt at Oaklea at the age of 14, when Margaret was just a baby. Margaret attended Semple Collegiate School (forerunner to Louisville Collegiate) just steps away from the Weissinger family home at 4th & Oak. School founder Patty Blackburn Semple  was also a suffragist and civic leader. Margaret continued her education in New York City, made her debut at the Galt House Hotel at age 20, and was active in local theater throughout her twenties. She began giving speeches related to suffrage as early as 1909.

On January 21st, 1910, Margaret Wessinger married Samuel Torbitt Castleman, president of Travelers’ Insurance Machine Company and member of the Pendennis Club. Samuel was related to Brigadier General John Breckinridge Castleman who was married to suffragist Alice Barbee, another influence on Margaret. Margaret and Samuel were members of several social and country clubs, had four children, and took ownership of Undulata Farm where they raised cattle and thoroughbred horses.

Between 1917 and 1920, Margaret  was a member of and elected officer in multiple suffrage and Democratic Party organizations at local, state, and national levels. During a September 1921 speech, she made a plea for Louisville women to get out the vote, bemoaning the fact that only 60% of white women had registered to vote in the last election versus 83% of black women. She believed white women like herself should be at least as appreciative of the voting enfranchisement achieved little more than a year before. Margaret died in 1945 at the Weissinger-Gaulbert Apartments and is buried at Cave Hill Cemetery. Undulata Farm is currently for sale with an asking price of $5,500,000. August 18, 2020 will mark the centennial of the ratification of the 19th Amendment.