INSPIRING CONFIDENCE: HOLDING BACK THE YEARS 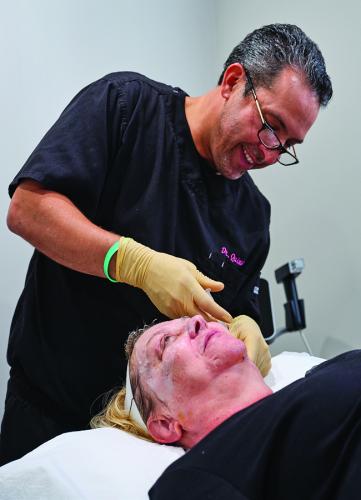 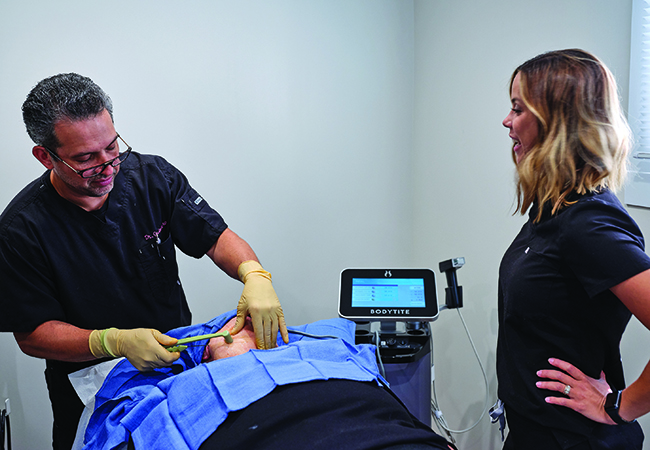 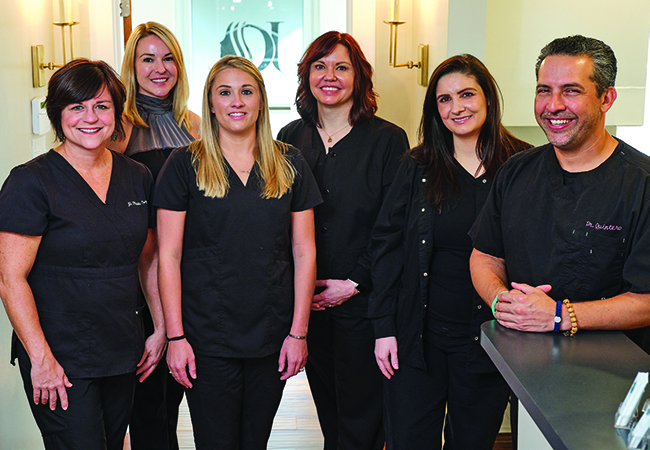 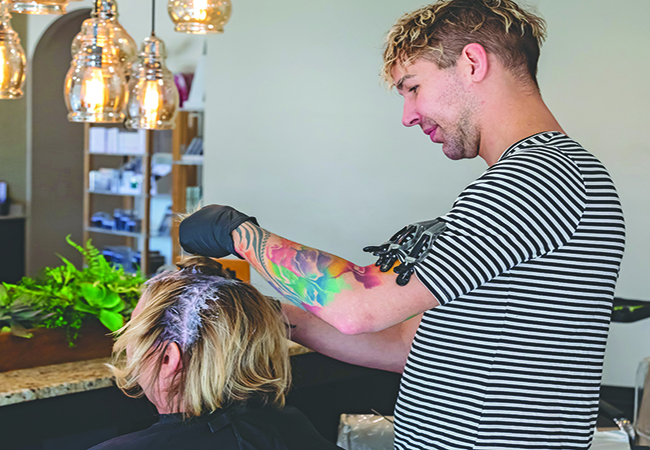 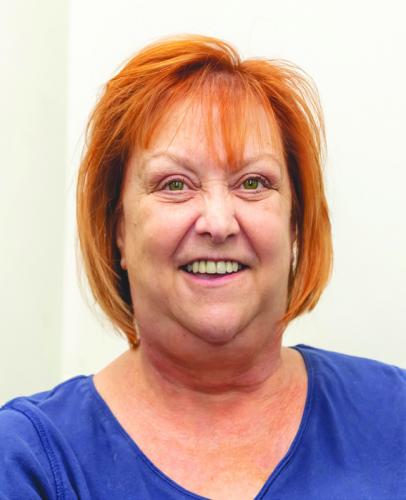 We begin with Part One of a planned three-part series covering in detail a complete, head-to-toe makeover for our very own Advertising Sales Manager, Kathy Thuerbach.

Kathy is a full-time working woman, loving wife, and devoted mother of three grown children with two grandchildren and two more on the way. She is originally from Toronto, Ohio and graduated from Purdue University with a degree in Mass Communications. While at Purdue, Kathy spent three and a half years as The Golden Girl, the most iconic feature baton twirler position in all of college athletics. In addition to performing on the field, The Golden Girl serves as a leader of the Purdue All-American Marching Band and as an ambassador for the university. Kathy bested 154 young women who auditioned to become the 10th Golden Girl, and had to re-audition each year to retain her title. There have been a total of 30 Purdue Golden Girls to date; and Kathy was able to attend their 50th Anniversary celebration in 2004. Prior to her time as Purdue Golden Girl, she was a former national and world champion baton twirler and Ohio Jefferson County Junior Miss Pageant winner. After college graduation, Kathy spent a couple of seasons as a Laker Girl. Her time in Los Angeles coincided with that recently established cheer and dance squad and a couple of the Lakers’ early 1980s NBA championships.

Over the years Kathy has balanced a successful career in advertising, marketing, and sales, a happy marriage, and the raising of three children who have all become successful in their own right. In 2014, Kathy suffered a major health scare that rocked her both physically and mentally. She was diagnosed with a large tumor of the pituitary gland. As a result of the surgical removal of the tumor, Kathy’s endocrine system was left without regulation and requiring hormone replacement therapy, primarily prednisone. The after effects of the surgery and side effects of hormone therapy have taken their toll on Kathy’s body and her self-confidence. She has reached a point in her life when she finally has the time to devote to her own self-care. Due to her medications, Kathy is not a good candidate for elective, traditional plastic surgery. So she is exploring some minimally-invasive options to turn back the clock and help her feel like herself again.

Enter Dr. Juan Luis Quintero and the expert staff at JQ Plastic Surgery and Medi-Spa in St. Matthews. Dr. Quintero is a highly skilled and talented plastic surgeon who personalizes his approach with each patient, continuously seeking out the latest and greatest of treatment options. He is assisted in his practice by Advanced Registered Nurse Practitioner Bridget Gary Hart, Aestheticians Danielle Overton and Brittany Wesson, Patient Care Coordinator Natalie Loreti, and Billing & Insurance Coordinator Stephanie Goodman. Kathy’s treatments under the care of Dr. Quintero also received the benefit of an all-day visit with Registered Nurse and InMode representative Beth Wetzstein of Maningas Cosmetic Surgery in Joplin, Missouri. Beth was in Louisville to train Dr. Quintero’s staff on InMode’s AccuTite®/FaceTite®/ BodyTite® Pro and Morpheus8® equipment and procedures for body and facial contouring and resurfacing.

During the FaceTite® procedure, Kathy felt tugging sensations but no pain. Dr. Quintero continuously monitored her comfort level providing rest periods, ice, and additional lidocaine injections as needed along with the patient-administered nitrous. The BodyTite® Pro machine has several inherent safety mechanisms for constant control of internal and external temperatures and cuts itself off to prevent any possible overheating or burning. Following FaceTite®, Kathy was alert and able to effectively communicate. She had just a few sublobular and submental incisions that were so tiny as to not even require a stitch for closure.

Almost immediately following Face-Tite®, Kathy received treatment to reduce wrinkles and discoloration and smooth the skin via Morpheus8®. Morpheus8® is another InMode procedure using the BodyTite® Pro machine with a handheld microneedling gun and the same foot pedal for energy application. This fractional microneedling goes slightly deeper than standard microneedling for reorganization of subdermal structures to improve skin texture and radiance with the added benefit of heat to assist in fat liquefaction. The fat liquefaction, fibrous tissue coagulation, and hemostasis of these procedures result in less swelling and minimal downtime as compared to conventional facelifts. Kathy felt mild stinging sensations that she says were more “surprising” as opposed to painful.

For aftercare, a compression wrap is recommended for just a few days of social downtime. Patients are given gentle but effective homeopathic medicine and ointments to take home with them, such as Arnica and Bromelain; and Bacitracin is also recommended. Dr. Quintero and staff members kept in constant communication with Kathy in the hours and days following her procedures; and Kathy was seen in the office two days later. Just as in her initial consultation, Kathy felt truly listened to and fully involved in her own recovery process. She says her family and friends already notice a difference in the contours of her face and the smoothness of her skin. Results can be seen as early as six weeks, with best results seen in four to six months. It is believed that these new instruments, procedures, and techniques will bridge the gap and reduce the need for some facial-tightening surgical procedures requiring general anesthesia and subsequently involving much greater risk to the patient. As a smiling and enthusiastic Dr. Quintero says, “Join the revolution!”

Kathy recently received a beautiful haircut and color from Mikhail Schulz of J. Michael’s Spa & Salon, also in St. Matthews. Mikhail has been a stylist for six years, all of which he has spent with J. Michael’s. He has also been an educator with Eufora Hair Care for the past five years. J. Michael’s is a full-service salon and spa providing luxury experiences to pamper their guests from head to toe. Mikhail is well-trained and experienced in performing most of the salon services. In fact, he has found it a challenge to specialize, as he so enjoys all aspects of what he calls “the best job ever!” Making people feel beautiful, listening to great music, and incorporating his love of fashion and pop culture in the process inspire Mikhail on a daily basis.

As a stylist, Mikhail makes it his mission to listen to his guests, give them his own professional opinion and perspective, and bring out their individual beauty. He also hopes to provide a greater understanding of the intensive scientific expertise involved in hair care and color, in addition to his artistry. As for the future of the industry, Mikhail sees more and more products and techniques being developed to celebrate and enhance natural hair textures, after decades of trying to bend or straighten hair to the will of passing fads and trends.

Mikhail’s goal with Kathy was to reflect even more of her fun, feisty personality. With regard to hair color, seasonally appropriate autumnal hues were used to complement Kathy’s green eyes. Mikhail used coppers, auburn lowlights, with darker tones at the base for depth, and some highlights toward the front to add light to the face. The cut is a modern shag bob with some volume at the crown. Products used were exclusively Eufora. Kathy is due for lash (and possibly hair) extensions, which we will cover in next month’s issue, along with follow-up treatments from Dr. Quintero, wardrobe, and makeup. Stay tuned for Part Two in our November issue!