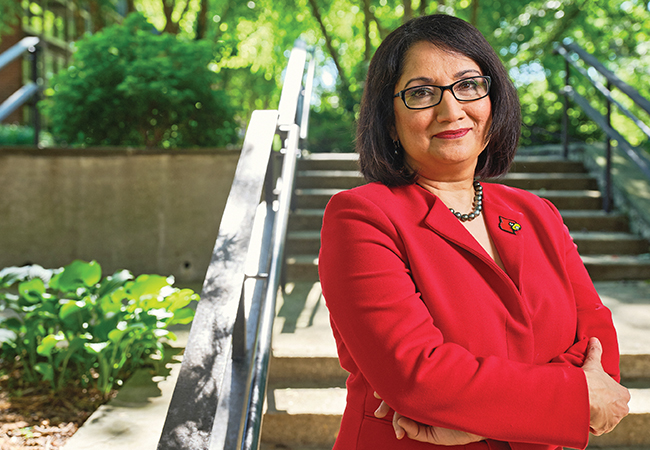 18th President of the University of Louisville

“I grew up in south India as the oldest of three daughters. I came to the United States after getting married to get my graduate degree from the University of Kansas. I taught marketing and business at Texas A & M University and the Ohio State University. I spent the bulk of my academic career at Ohio State, only temporarily breaking away from higher education into the role of Executive Vice President (reporting to the CEO) at Hunting- ton Bank, a top 25 US bank at the time. Afterward, I returned to OSU before I was recruited and then selected as the H.D. Price Dean of the School of Business at my alma mater, the University of Kansas. I was later promoted to Executive Vice Chancellor and Provost before coming to the University of Louisville as the 18th president in 2018”

With hard work comes opportunities for growth: “I love higher education and feel so fortunate to be here at the University of Louisville.”

Dreams for the university and the city:

“They’re both intertwined. I believe that the University of Louisville is a great place to work, learn, and invest. So the dream would be that anybody who’s looking at undergraduate degrees, inside or outside of the commonwealth would be compelled to look at Louisville. We’re becoming something that is an aspiration because people want to be here.”

“Specifically for our students, I dream not only that they have very fulfilling experiences while they’re here but that this experience sets them up for success in life, so there is a lifelong bond. This is what helps them make a difference. We have to help each student find their purpose in life. That is our job, and it is a fulfilling one every single day.”

Dreams for the city:

“I think we’re such a gem! I do. How we are in Louisville, how we exist, it’s extraordinary to me how everyone supports one another. Whether its the arts, sports, festivals, and other connections; we grow together. We’re all in this together in a tie that creates bonds that are a rarity in other places. The university and the culture of the community are amazing to be a part of.”

Her advice to other women in business:

“Women in business must support one another and find allies within our organizations to support us. When you’re a lone voice, it’s easy to become generalized as the one woman boss. If that person is great, you’ll think that woman is bad, but if it’s a man that’s bad and several of them you don’t generalize it being a man, it’s just that they were bad. Anytime you have non-normative leaders, we must be mindful that there are many role models, so none of us feel as though there is only one way to be a leader.”

WHAT SHE TAPS INTO FOR INSPIRATION AS A WOMAN IN BUSINESS:

“What lies behind us and what lies before us are small matters compared to what lies within us. And when we bring what is within us out into the world, miracles happen.” - Henry Stanley Haskins

Favorite quote for education and life:

“Everyone you meet is fighting a battle you know nothing about. Be kind. Always.”-  Brad Meltzer

“Always be humble and kind” by Tim McGraw

Things to think about: The Glass Cliff

“We are now at the glass ceiling as a limitation, but there’s an interesting phenomenon happening with companies. When they are going through a crisis they tend to hire women as leaders instead of men; which tends to be the typical succession plan. The caution within this is that other women must support one another during leadership developing times. It’s truly fascinating research work that every woman should read as this is a trend that is catching speed and as fast as times are changing, we must be ahead of them building one another up.”

Advice to herself and any other woman in business:

“Try not to think about what anyone else thinks about you. They’re in their mind thinking of their own life. Focusing there is a waste of your energy.”