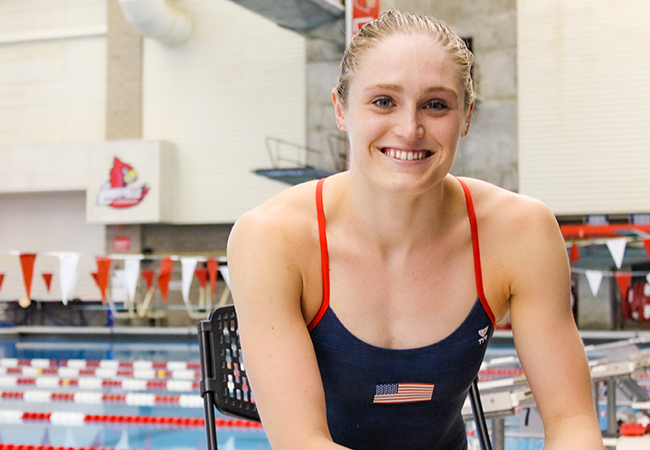 At this stage of her life, Kelsi Dahlia expected that she would find herself working as a physical therapist. Instead, the 24-year-old Olympic swimmer and Gold medalist in the 4 x 100-meter medley relay, was training for the World Champions Meet this summer, the second highest swimming event behind the Olympics. Kelsi highly rates the University of Louisville's Division 1 athletics and their extremely competitive nature, as well as the team culture of UofL.  "We are incredibly competitive with each other every day, and we push each other hard. I definitely couldn't have had my successes without our team's successes."

As for the city of Louisville, Kelsi knows firsthand how welcoming the people are. When she was set to swim at her first Olympic Games in 2016, the expense of having her family there to see her compete in Rio was steep. However, when her family announced they were selling T-shirts on an online site to raise money, the people of Louisville stepped up, making enough purchases to cover the cost of the trip with profits of over $30,000. She says that "The city of Louisville surrounds U of L athletics and raises us to a higher caliber with support."

Kelsi's success hasn't come without sacrifice. She's had to miss out on time spent with loved ones to focus on training, but there have been many lessons along the way. "I've learned the value of saying no to some things so that you can say yes to better things."

Her advice for women and girls with dreams of being professional athletes or succeeding in the business world is to keep yourself accountable to your schedule in order to meet your goals. "Be sure to surround yourself with people that love you for you, not what you do," she says. Kelsi knows that her career would not have been as long or successful without her strong will and evergreen support from her family and friends.

"Success doesn't define you; it elevates you. From there, it is up to you which path to take."