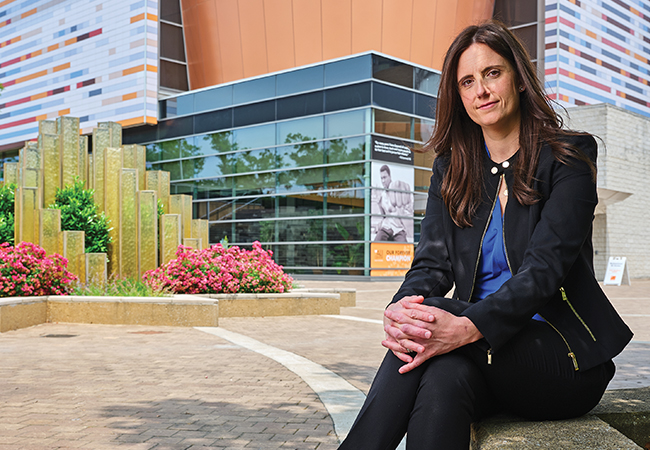 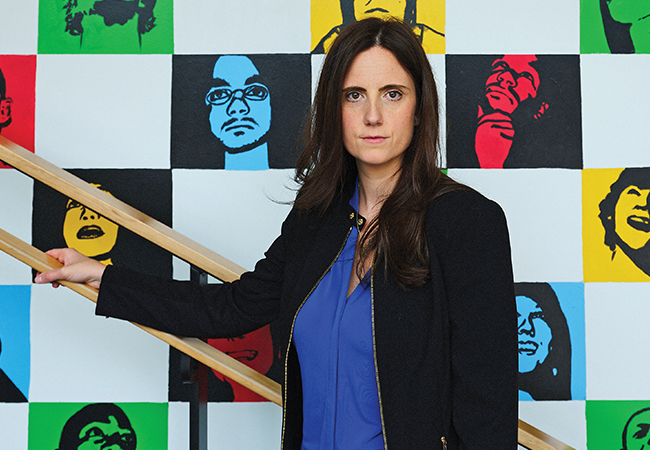 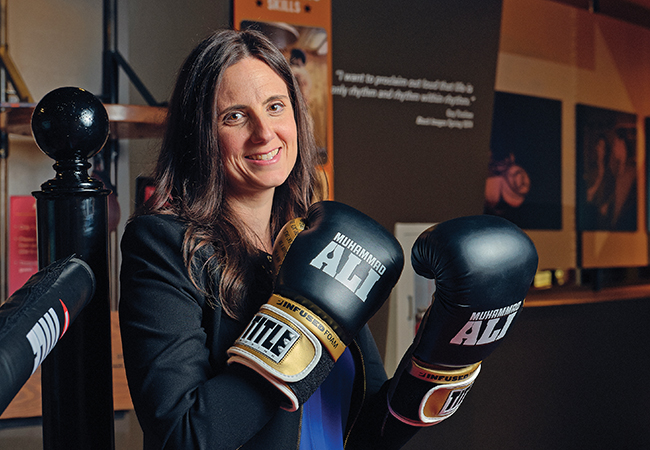 If anyone has the right to be called a survivor, it’s Whitney Austin. She’s a strong woman who went through a terrifying ordeal, and now she uses her experience with others. She shared the details with Bella. Warning: Parts of this story are very graphic, discretion is advised.

The shooting happened around the same time that we purchased a new home. It was a Thursday morning and I drove up for a day in the office rather than staying the night. I remember leaving the house and kissing my kids goodbye. They wanted a second hug and kiss that day, and I did even though my brain was telling me that I needed to get out of the door. I'm thankful I took the time to do so that day.

I like to optimize my time during the drives, so I spent my drive time listening to a podcast about banking and then joined a conference call with a few peers. As I drove into Fountain Square parking garage, I knew that I would lose the signal on my call, so I reminded everyone that I would probably lose connectivity, and I did. I walked up the stairwell into the lobby of the Westin Hotel, then exited through the revolving door to go out onto the street. That’s when I dialed back in for the conference call, and crossed 5th Street on the walkway with my attention split between the call and watching out for cars, as they typically don't slow down in that area.

Now, this is where my memory gets bad.

I have no recollection of whether there were people around me or not; it was probably a ghost town, but my mind was focused on the conference call so I didn't observe my surroundings as others may have. I was walking towards the entrance of the building and at the revolving door, I noticed the glass within the door was shattered but still fully entact. It didn't actually alarm me. Weeks prior my husband's car window was broken with a rock and at that moment I thought this glass is broken because someone threw a rock. Not concerned with the shattered glass, I pushed the revolving door with the right side of my body and that is when everything happened. Multiple bullets hit me, and I collapsed because of the force of the impact.

I never saw my shooter or any of the victims. I was focused on Fountain Square, trying to find someone to save me.

As I collapsed outward, I looked toward Fountain Square. That's all that I remember visually, I was protected in a way because I didn't see what was happening in the building. I never saw my shooter, nor any other victims. I was focused on Fountain Square, trying to find someone to save me. I knew it was a mass shooting, there was no other rational explanation. I pay enough attention to the news and have been fearful of it happening to my family , so I knew I was in one. Without a doubt.

I had to think about what to do. How could I get out? I was coughing up blood and I was in shock. Adrenaline was pumping through me. There wasn’t a lot of pain as I was focused on what was happening around me. At first, it didn't feel like I would survive. I’d seen enough violent movies to know that coughing up that much blood isn't a good thing. However, a few seconds passed and I wasn't dead, so I knew I had to focus and get out of this situation.

My first thought was to get out by standing up and escaping, but I tried, and I wasn't strong enough. My second thought was to call someone, call anyone to save me. I realized I still had the conference line running  as I could hear my peers but I had placed the call on mute earlier.  I remember hearing them say, "Whitney, are you there?" repeatedly, but I couldn’t unmute it because once I moved, it happened again.

He came back and shot me. That's when I started to feel hopeless.

I decided to play dead.

I assumed he shot me again because I moved, so I needed to convince him to leave me alone. Without anyone on Fountain Square to save me, I didn’t see any way out of the situation. But luckily for me, Officer Alphonso (Al) Staples and the Cincinnati Police Department arrived on the scene. As soon as my eyes made contact with Al, I shouted as loud as I could:

You need to get over here and save me. You've got to save me. I have a five-year-old and seven-year-old, and they need their mother.

Al screamed back at me about a five and seven-year-old being inside and I clarified that they were at home and they were fine, but they need their mother, so he had to save me to get me home to them. I remember laying there and wondering why he hadn't saved me yet. But that's not how things work. Law enforcement must first eliminate the threat before they can rescue victims.

As I waited for Al to save me, I regained my will to survive. I also grew frustrated. I was frustrated that I was caught up in a mass shooting but even more important, I was frustrated that I had done nothing to prevent it. I had taken steps prior to the shooting to volunteer with a local grassroots organization focused on preventing gun violence. I’d received invites yet ignored them. In that moment, I felt guilty that I hadn’t done more.

In total, the time I spent within the revolving door was approximately  two minutes, but it felt much longer to me. As soon as they took down the shooter, Al saved me. In my memory, I thought he carried me out, but when I watched the video, I realized  that he and another female officer helped me walk out. He walked me over to the flagpole bench on Fountain Square. I remember the pain was starting to set in, but I needed to stay focused on my goal of getting home to my family.

After being rescued, first responders took all measures possible to make me comfortable while trying to save my life. The ambulance arrived shortly and thanks to the amazing staff at UC Medical Center, I was stabilized and moved into the NICU.

I remember calling my kids that night from the hospital. I was so grateful that my family had gone to such great lengths to keep my children away from the news. My kids were blissfully unaware of the dramatic events of the day and the rollercoaster of emotions that others weren’t as lucky to avoid. By the time they talked to us that evening, they knew something was up because they were at grandma and grandpa's house and mommy and daddy weren't there with them. However, we spoke with them over Facetime, my husband explained to them what happened, and they could see that I was sitting up and looking pretty good in the hospital bed. They asked us a few questions, then asked if they could go back to watching their television show. They weren’t concerned.

I didn’t have surgery until the next day. I needed a repair surgery for multiple bones in my right arm.  It was hit first as I pushed through the revolving door and my humerus, radial head, and ulna were shattered. Prior to surgery, my right arm wasn’t even recognizable.

I was able to go home within five days of the shooting.

The thing that I remember most about coming home the first week was how pitiful and dependent I was. On day two, Waller, my husband, and a family friend  helped me lean over the bathtub and washed my hair three times just to remove all the blood.

I have learned how amazing the human body is. In the beginning I couldn’t use the restroom on my own, I couldn’t feed myself, I couldn’t put my hair in a ponytail. On top of that, I wasn’t allowed to bathe or shower for weeks because of the incision from my surgery. My amazing hairstylist would do my hair for me so that I could look presentable. To get by that first month my cousin moved in with us and played the role of mommy, caretaker, and business partner.

Every day and every week I just got stronger and stronger.

I can remember being in my backyard and walking up just four steps, and that made me feel winded. I knew I was so fragile at that time. However, through breathing exercises and therapy, I have been able to rebuild my strength and endurance. I go to physical and occupational therapy multiple times a week and I’ve progressed so much in just nine short months. While there is still much to be done, I can now pick up my kids.

I went swimming for the first time this summer realized I can’t do the breaststroke like I used to. Freestyle is hard too.Every time I try to move my right arm up for the rotation it just catches and it’s very uncomfortable. Throwing a football well is also out of the question right now, but I’m very proud of the progress I’ve made  after being shot twelve times. Picking up your kids is one of the best feelings, and I get to do that. This is a miracle.

I’m very lucky with my injuries because they could have been much worse.

No major arteries were hit by the bullets and I didn’t see the shooting. Without visual images to haunt me I feel quite strong mentally. However, one of the most difficult days for me was the day of my second surgery on my right arm in October 2019. On that day the shooting at the Stony Brook Kroger occurred. That shooting became a huge trigger for me.

Cincinnati isn’t my hometown, so it was very easy to dismiss what happened to me and the fear of it happening again. But then it happened here. I know that Kroger. I had worked in the bank within it years ago. My customers and family use that Kroger. I started to ruminate over it for two straight days. I read about the victims, the perpetrator, and all the details.

I learned quickly that I couldn’t do that.

It doesn’t matter if it’s the shooting at Stony Brook, Tree of Life in Pittsburgh, or any other shooting, big or small. I become extremely distraught about the loss of life and I cannot pour over the details because it sends me into a tailspin that I think many people can only imagine. After three days of ruminating about the  Stony Brook shooting, I knew that it wasn’t helping and I needed to stop.

What I can do is do the work of my non-profit, Whitney/Strong.

I pushed myself out of my head and put myself into action. While I see a therapist regularly and she has provided me with tools to get through these moments, what helps the most is channeling my energy into Whitney/Strong.  I feel pulled toward preventing gun violence and couldn’t turn my back on this issue if I tried.

The Whitney/Strong organization is focused on reducing gun violence through majority-supported and evidence-based solutions. Whitney/Strong has three main solutions to execute on for 2019/2020: preventing firearm suicides, enforcing existing laws aimed at preventing prohibited persons from purchasing firearms, and getting extreme risk protection orders for Kentucky and Ohio. To learn more join us on September 6th at the Muhammad Ali Center for Whitney/Strong’s a Night for Life. Additionally, you can learn more at whitneystrong.org and through social media with @whitstrongorg.