WHAT MAKES LOUISVILLE GREAT - DINING WITH A VIEW 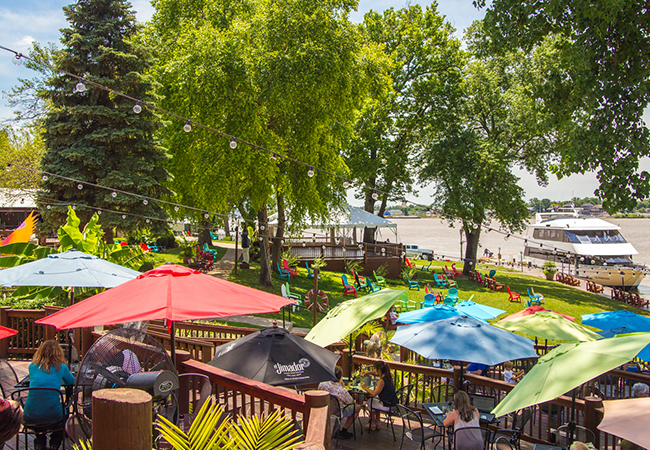 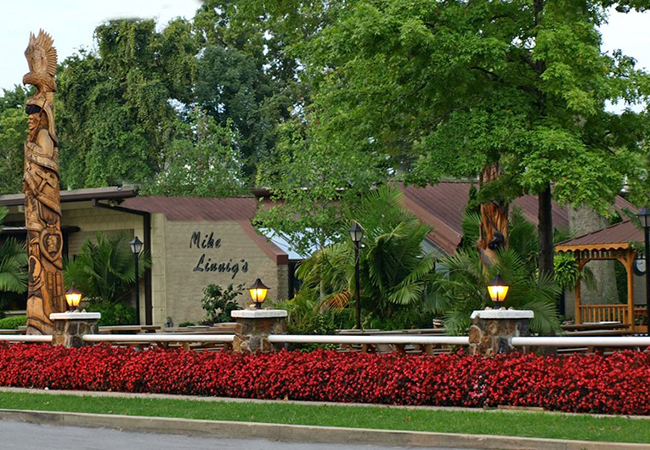 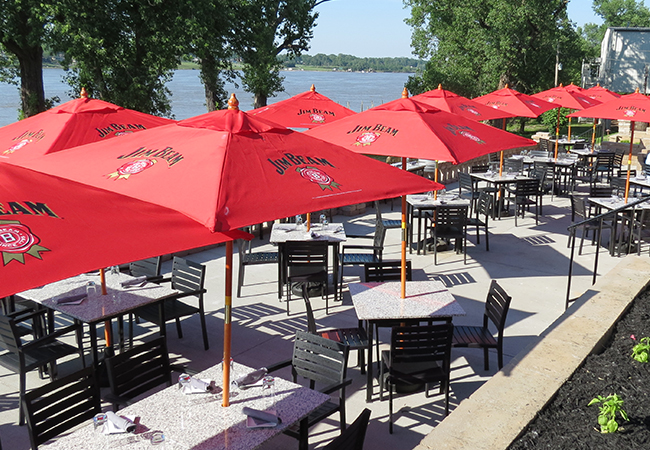 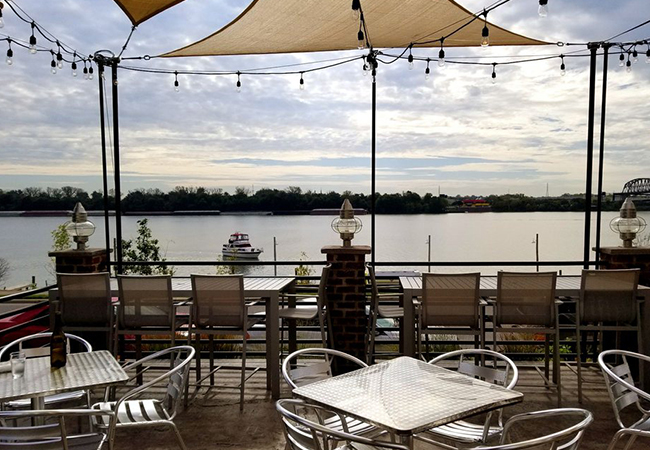 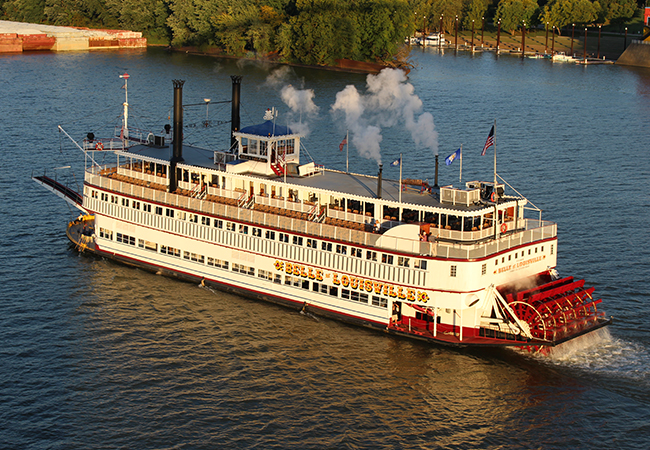 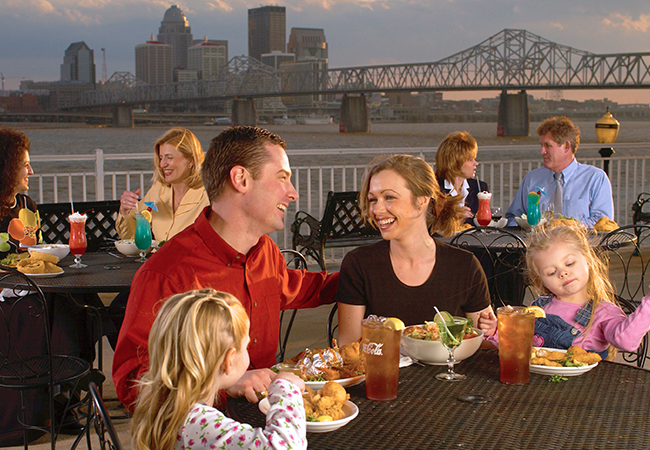 “Dining with a view” is indisputably one of the things that makes Louisville great. While we relax at outdoor dining spots along the Ohio river, we can’t feel anything but sorry for our out-of-town friends who are unable to enjoy the magnificent view. However, let’s not be smug when we call to tell them we’re watching the boats go by while we’re nibbling from a plate of freshly shucked oysters and sipping our blue cheese olive martini or, perhaps, a little umbrella-decorated libation.

The river has a personality all its own. It ripples lazily along, with barely a sound, convincing us that life is best lived unhurried. On its banks and even a bit farther removed from the water itself are delightful venues for meals that celebrate the tastes of summer and the congeniality of old friends getting together, and strangers becoming new, fast friends.

Whether you’re in the mood for fish and chips, a burger, or a slightly more upscale seafood salad or Cajun spiced scallops, there are hundreds of menu items at some of Louisville’s most summer-ready restaurants. Local chefs have been eagerly awaiting summer to showcase seasonal specialties and offer a panoply of lighter choices than those served during the frigid days of winter.

“We’re sort of off the beaten path but are situated on the bank of the Ohio. The way our patio overlooks the river, the way we capture the river and the sunsets, are all part of what makes the magic happen here,” says John Burgess, operations manager at Captain’s Quarters Riverside Grille.

Menu service is offered to boats that dock at the restaurant. Boaters, as well as diners inside Captain’s Quarters and on the patio, have myriad choices that include Caesar salad, tuna tataki, chargrilled oysters, green chili wontons, pizzas, Hot Browns, and shrimp rolls. A “Little Captains” section of the menu is designed with a kid-friendly burger, chicken fingers, pizza, and mac-n-cheese.

Live music on Friday, Saturday and Sunday until the end of October enlivens an already lively atmosphere.

The CQ Princess, a 96-foot yacht, offers private dinner cruises for weddings, rehearsal dinners, and parties as it travels up or down the river, depending on the client’s preference.

“Captain’s Quarters is all about a strong boating community. We’re part of a well-entrenched neighborhood that’s kind of old school. We get a lot of support from neighbors when we go through floods. Everyone who comes here is very friendly and understands that life on the river is different,” says Burgess.

A short stroll along a path leads to Mike Linnig’s view of the Ohio. The serenity of the area plays enough of a trick on you that it’s easy to forget you’re only minutes away from the bustle of downtown.

Diners amble around the garden area and sit at picnic tables, in gazebos, a cabin, or tents and enjoy longtime menu favorites like rolled and pan-fried oysters, codfish, coleslaw, hush puppies and onion rings. The menu also includes palate pleasers such as spicy fried pickles, grilled salmon, chicken wings, crawfish, alligator, and frog legs. At Mike Linnig’s you won’t want to give a pass to desserts. Key lime pie, Oreo cheesecake, and pecan pie end a meal on a sweet note.

Once the site of a family farm, Mike Linnig’s started out as a fruit and vegetable stand. Soon, sandwiches and apple cider were sold. Fish sandwiches were such a hit that the restaurant uses the same recipes today. What has made Mike Linnig’s a beloved must-stop-by eatery? “People like the family atmosphere and they know to expect large portions,” says co-owner Nancy Wuerth.

Adults and kids share a fascination with the wood sculptures that are placed around the garden. There, Paul Revere, Mike Linnig’s family members, a mama grizzly bear, and the Liberty Bell are 20-foot wooden scene stealers.

“It’s really fun to watch the river come back from what it was like in the winter, see the docks get cleaned up and the grass turning green. I can plant produce and herbs on the grounds. The property just blossoms,” says John Varanese, chef and owner of River House.

River House’s southern cuisine with an emphasis on seafood and a full raw bar is invitingly spacious with a killer view of the river. It’s a hot spot among locals and visitors who make the discovery. Up to 220 people can be seated outside while both tiers of the patio can accommodate 150 guests. One of the dining rooms, with a 40-foot river view and the option of a private patio, can be reserved for private parties.

With eight boat docks out front, boaters can easily disembark and become part of the River House scene. (We see nothing wrong with buddying up to them in hopes of getting an invite for a cruise!)

“What’s nice about the view is that we’re looking at residential, not industrial, on the Indiana side of the river,” says Varanese. “Many times, I want to sit outside and have a cocktail on the patio and watch the boats. Someone actually brought in a pontoon plane. That was pretty cool.”

“Levee is more contemporary, with a gastro pub menu, than River House,” says chef and owner John Varanese. “You can come up off a boat in your flip flops and not feel out of place, or just walk in and have cocktails with your friends and be entertained. Many of them like to go down on the lawn and sit in Adirondack chairs and even start their own fire.” He notes that some guests start out at River House for dinner and then move on next door to Levee for drinks and dancing.

As with his menu at River House, Varanese likes to change it up when he’s inspired by new flavors or ingredients. In the summer, get ready to enjoy east and west coast oysters; crab, artichoke, and spinach dip; short rib nachos; four types of sliders; steak medallions; and a variety of sandwiches and burgers.

Varanese keeps the good times rolling at Levee with monthly movie nights during the summer.

Step up your river-focused dining experience with a real boat ride. The Belle of Louisville is the oldest authentic Mississippi-style steamboat which offers brunch, lunch, dinner and special event cruises that can be a river-faring outing for the entire family.

“It’s fun for everyone. People celebrate birthdays, anniversaries, and family reunions, or they just come to have a good time watching the paddlewheel and cruising in to Six Mile Island and back, a trip of two hours,” says Betty Cissell, sales and marketing manager. A DJ or historian is on board to point out landmarks and to play background music.

Children are often in awe to see and board the massive boat. There will be the occasional question whether there are alligators or sharks in the river. Everyone involved has been pleased to report that the answer to that query is no.

Buffet meals onboard consist of a salad, mashed or roasted potatoes, southern green beans or a vegetable medley, fried chicken and beef tips or carved steak, and an assortment of pies and cakes.

Similar meal cruises are available on the Mary Miller, a boat named after the first woman to receive a steamboat license.

The Belle of Louisville hosts special moonshine and craft beer cruises, dance cruises, its own birthday party and a Boo Cruise for Halloween.

Portage House’s view of the river has the added advantage of a panoramic shot of the Louisville skyline. “There’s a great view of the walking bridge and we see tugboats pushing barges and the Belle of Louisville going back and forth on tours, and there are many private boats. Most people don’t realize all the boating action that’s on the river,” says Dallas McGarity, chef and owner of Portage House.

Boaters who dock at the restaurant, a renovated 1907 house, have become regulars along with newcomers who relish McGarity’s menu that’s full of surprises like Korean fried broccoli and kim chee risotto fritters. They have taken their place among shrimp and grits, seared duck breast, roasted Brussels sprouts, cornmeal fried catfish, and a barbecue pulled pork sandwich. “The meatloaf is really popular. I guess it’s comfort food people can’t get anywhere else. It’s high quality beef and we do it right,” says the chef.

Portage House hosts a variety of special dinners, such as the tiki dinner featuring Polynesian food that’s planned for the summer. Other events are held on a random basis. “The view from sitting on the patio is its own event, so peaceful and cool and relaxing. Even when the weather is 90 degrees, you still get a breeze from the river,” says McGarity.

Locally owned and operated for 70 years, KingFish restaurants are iconic riverfront dining spots. “We’ve always been family restaurants that are as great for children as they are for parents and grandparents. Of course, there’s plenty of seating inside but there’s also a deck that’s full-service, and there are picnic tables for carryout so guests can make their own little picnic,” says Greg Wortham, Vice President.

The Original Cod Sandwich has been a staple for seven decades, but Kingfish isn’t defined by that best-seller alone. The menu also features seafood gumbo, coconut shrimp, catfish, citrus and pepper seared tilapia, Alaskan crab legs and many other items from “Classics” to “Grillin,’ Broilin’ and Boilin.’” The surf and turf, which features a rib eye and lobster, is a perfect example of when sea and land meet for a delish duo.

Outdoor live music is played Wednesday through Sunday, weather permitting, at the River Road location, which is distinctive for its park-like setting with a river view. Tuesdays through Sundays bring live music to the lower patio of the Jeffersonville restaurant.