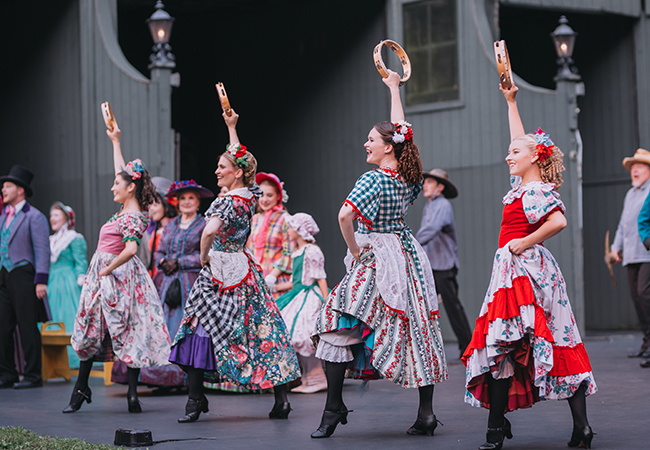 Theatre is alive and well in Louisville. There are shows throughout the year to entertain from free Shakespeare in the park to a visit to My Old Kentucky Home theatrical production. Enjoying global recognition to local innovation you’ll discover ‘What Makes Louisville Great.’

In the immortal words of Joni Mitchell, "you don't know what you've got 'til it's gone." That was almost the case with that long-tenured Kentucky institution, the Stephen Foster Story. The show, which chronicles and celebrates the life and times of the writer of “My Old Kentucky Home”, began in 1959. It has been performed at the elaborate but still charmingly quaint J. Dan Talbott Amphitheatre during annual seasons ever since but was put in jeopardy when its stage was ruled hazardous and was then subsequently condemned in 2017. The amphitheatre sits on the grounds of My Old Kentucky Home state park, a point of pride in Bardstown, where the community rallied together in-order-to save the show. The cast and crew powered through its productions of the show last summer, even as the stage was starting to crumble around them. Many came out to see and support the historic scene, as the dramatized life of Stephen Foster, the great American songwriter, played out on this nearly six-decade old stage, just as it had for all those years. It was clear that the tradition of this show was still too important to let go.

Late last year, efforts were put in place to rebuild the stage. Great care was taken to recreate the appearance of the original with certain improvements, including a new, stronger sound system. Efforts have also been made to make the props and settings more true to the 1800's period in which the show is set. The expectation is that this stage will last at least as-long-as the old one, which is quite impressive considering the outdoor elements to which it will be exposed. When the show premieres this month, audiences will be treated to a new actor in the title role, Kyle Mangold. There will also be an opportunity to tour the backstage area. There's already a great deal of excitement for the 4th of July celebration, in recognition of both the birth of our nation and the birthday of Mr. Foster himself. The annual event always features free cupcakes for attendees, as well as a firework display after a performance of the show, in which attendees can remain seated in the amphitheatre and watch the exciting bombs bursting in air.

Elsewhere in the park, a historic house sits. The mansion belonged to Senator John Rowan in 1795, it became associated with Stephen Foster and his ballad based upon his visits there, along with Harriet Beecher Stowe's “Uncle Tom's Cabin.” While the original meaning and intent of the tune have been greatly lost over the years, its original intention was to serve as a plea against slavery. No less an authority on the matter than Frederick Douglass wrote that the song "awakens sympathies for the slave, in which antislavery principles take root, grow, and flourish."

Tours of the over 200-year-old home are constantly updated and include a great amount of theatricality, with tour guides in period-accurate costume who greet you with the words "welcome home" and will sing to you during your visit. This Fall will bring special presentations about the Civil War, as well as Shadows of Federal Hill, a tour through the house in which guests will encounter actors depicting ghosts of people from the time of the mansion's prime.

LET US ENTERTAIN YOU

Check out these other local theatrical companies and their upcoming season.

A truly first-rate Louisville institution, Actors Theatre brings the cutting edge to the city every year through the celebrated Humana Festival of New American Plays, now in its 43rd year. In addition to hosting touring productions here and there, Actors features a continually evolving cast through a good number of plays on several stages inside its downtown building. Every Fall, theatergoers look forward to the exciting production of “Dracula,” and the holiday season would never be the same without that run of “A Christmas Carol.”

The Bard's Town is situated in the Highlands, where it brings an extra sense of eccentric fun to the neighborhood. It features a restaurant area serving delicious made from scratch food, a perfect companion to its cozy theater space. With seating for about 50 people, the intimate locale is perfect for it's often interactive performances, both nationally touring and entirely locally produced. The Bard's Town also features weekly karaoke hosted by local legend Groucho P. Trout.

Devoted entirely to plays reflecting LGBTQ culture and issues, Pandora Productions presentations can always be counted on to make you think and consider the foibles and challenges of life from new perspectives. Subscription tickets are very affordable and the styles of shows are varied. This Fall will bring a production of the Harvey Fierstein classic “Torch Song Trilogy”, then November will see a groundbreaking performance of “Fun House” based on Alison Bechdel's acclaimed graphic novel.

SHAKESPEARE IN THE PARK | kyshakespeare.com

2019 marks the 49th year for Shakespeare in the Park, a point of pride for local enthusiasts of the classics. The best way to experience the creations of the Bard are live and in person, before your eyes, and doing so surrounded by nature in Louisville's wonderfully designed Central Park only makes the performances that much more exciting. This year's festivities include a total of 7 productions, including “As You Like It,” “The Tragedy of King Lear” “Henry IV Part II,” and the especially immortal “Romeo and Juliet,” presented by the visiting Cincinnati Shakespeare.