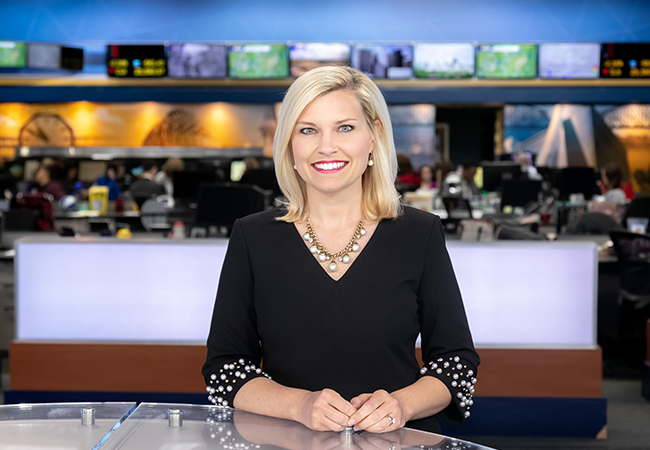 WLKY morning anchor Julie Dolan, talks about her journey to Louisville and how at a young age she recognized broadcasting was something she wanted to do.

Imagine Julie Dolan around age eight, using her family's camcorder to make pretend news shows with her younger brother. "We would put on different clothes and I would interview him, make up little situations," she recalls. "I always knew that broadcasting was something that I wanted to do, but I wasn't sure if it was something that I could do."

She would, of course, make it happen— leaving her home of Cincinnati to study at the College of Charleston as a young adult, where she would study and grad- uate with a Bachelor of Arts in communications media studies in 2007. This took her to a reporting job in Evansville, where she quickly found herself on the air. "You really learn by being in the field," she says. "Going live on the air and feeling natural about it is something that you really have to just jump right into and develop as you go."

Going live on the air and feeling natural about it is something that you really have to just jump right into and develop as you go.

2012 would take her to Lexington, where she would serve as an anchor on WLEX, an NBC affiliate. While there, her life would change forever when she would meet Louisville native Andy Barger, the man whom she would marry in 2016...but not before she would transition to Cincinnati's WCPO in 2014. She found that it was fantastic to be back home and doing what she loved, but living long distance wasn't easy. "We were married and then lived apart for six months! It wasn't easy," she recalls.

Since Andy, a structural engineer, was tied down here designing projects like the revamped Kentucky International Convention Center and the cutting-edge redesign and remodel of the Speed Museum, Julie began to look for work in broadcasting in the Derby City. "I heard that WLKY was the best," says Julie. "After I came in for an interview, I really believed it." She met with News Director Andrea Stahlman and Jen Osburne, Assistant News Director, and found them both to be extremely impressive. She happily accepted the morning anchor chair when it was offered. "I love working in a newsroom run by women. They’re family oriented and understand that while news is our top priority, life exists outside of the newsroom, as well." Julie says the morning team has started to gel in the last year, making work even more enjoyable.

Over her career, accolades and awards would begin to stack up, including an Edward R Murrow Award given to WLKY for a story that she played a role in, she was named a Kentucky Colonel by Governor Steve Beshear for outstanding community service, and just this past year she was

named best anchor in the state by the Kentucky Associated Press. She's appreciative of all this, but there are two very important concepts that drive Julie Dolan. "There's nothing like breaking news. Getting in depth on a story and taking it through to its conclusion is such a satisfying thing. However, one of the most important things, especially in local news, is to focus on people who live in this community. There's nothing like the feeling that comes with shining the spotlight on people who are making a difference."

Now 10 months old, Julie and Andy's little baby Gwendolyn has become the center of their world. "When I was pregnant, a lot of people didn’t realize it because I was behind the news desk," Julie says with a laugh. "It's as if she just appeared!" The magic doesn't end there, as the beautiful baby is showing some pretty incredible developmental signs, like trying to walk at nine months.

While the somewhat grueling schedule that comes with the morning shift is challenging to many, it works very well for Julie. She gets out of bed at 2:30 AM, goes to work, goes on air, and is home in time to get little Gwen after a half day in daycare and spend the afternoon with her. "I have the best of both worlds. It's been so much better than

I expected. Now that I have her, I just don't know what I ever did without her."