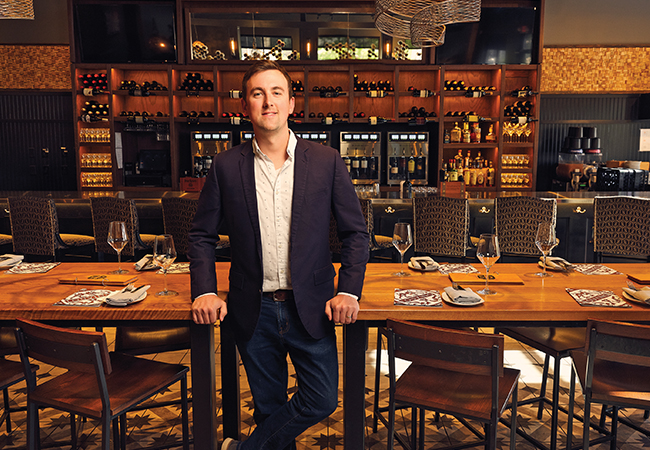 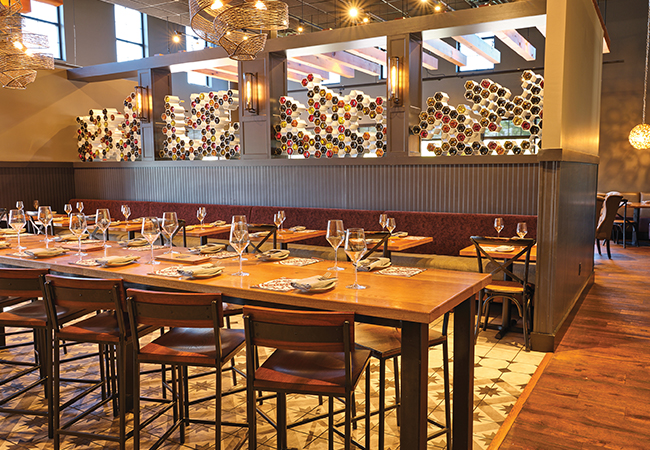 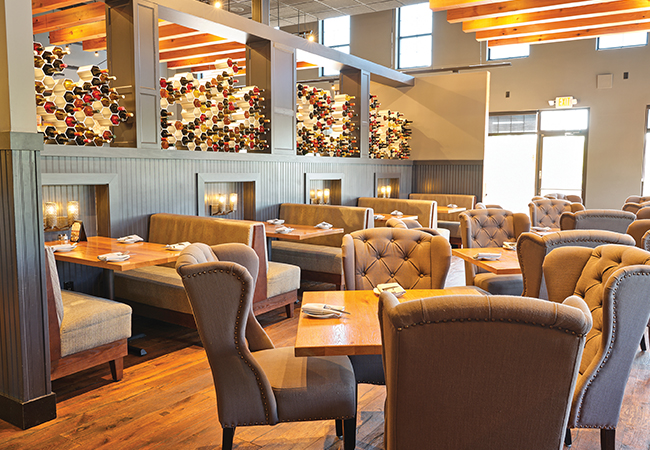 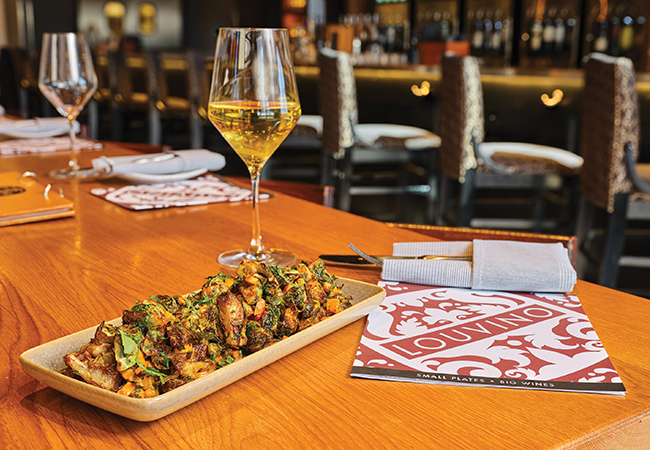 With foodies' ever-changing palate, a southern-styled comfort food menu paired with the perfect wine is a recipe for success at LouVino... and don't forget the biscuit.

Chad Coulter had zero experience in the culinary world when he opened his first LouVino location. Fast forward to the present— he has now opened five LouVino locations. What happened between then and now is a fascinating trip of entrepreneurial gump- tion, an evolving palate and a public that can’t seem to get enough of what his team is serving. Spoiler alert: There’s more to come. And this time, it’s about biscuits.

Chad and his wife, Lauren, are pharmacists by training. After they moved to Louisville, where Chad began teaching at Sullivan University College of Pharmacy, they opened Uptown Art, an art instruction studio that dials up the fun with wine and beer. The Louisville studio was so successful that they opened a similar spot in New Albany. Wine sales were booming, leading to the germination of an idea.

“Everything around here was beer and bourbon so we thought about opening southern influenced small plates restaurant and wine bar,” says Coulter. Thinking turned into action when he met Tavis Rockwell, now the culinary director at LouVino. The trio’s first location in 2014 on Bardstown Road was such a hit they wanted to expand to the east end. “We couldn’t find a location that wasn’t a strip center so we bought land and built our own restaurant in the Douglas Hills/Middletown area. Soon after, we opened another LouVino in Fishers, Indiana, then in Cincinnati, then in downtown Indianapolis.

Wine and food are meant to be paired with each other. While our dishes are very bold and rich, and are comfort food, our wine program doesn’t stick with only one style wine or wine from one area of the world.

The executive chefs in each location have the freedom to change about half the menu that reflects a Southern influence. Some dishes, such as the brussels sprouts salad, loaded tots and fried chicken tacos, make the cut at every LouVino. The fried chicken tacos vie with the chicken sliders LouVino serves at brunch as Chad’s top menu picks.

Rockwell and the executive chefs are given almost full autonomy in deciding what goes on their menus as Coulter is remarkably frank about his own food expertise. “As a young kid in Georgia, I used to dabble in cooking and baking but I don’t feel like I really appreciated food or developed much of a palate until we opened the first restaurant. Now I try to give my two cents worth and say, ‘Hey guys, from a normal consumer’s view, such and such might be plated differently or a price is too high or too low,’” he says.

“Wine and food are meant to be paired with each other. While our dishes are very bold and rich, and are comfort food, our wine program doesn’t stick with only one style wine or wine from one area of the world. Sixty to sixty-five percent of our wines are sourced from the United States, but we have a good diversification from around the world, in Old and New World styles,” he says.

The wine list represents about twenty percent of styles that most people would recognize. The others are styles or vineyards that are not as well known. Coulter and his staff have the goal of designing wine lists that are fun and approachable, not super wine nerdy.

LouVino menus vary based on the differences in clientele. Guests at the Bardstown Road location tend to be more adventurous than those in Middletown. “We have tried a lot of things over the years. I don’t think we could get away with putting rabbit or octopus on the Middletown menu,” says Coulter.

No one could say he isn’t an adventurous entrepreneur. In May, he’s planning to open Biscuit Belly, a fast-casual breakfast and lunch concept that’s focused around a biscuit sandwich at 900 E. Main Street, in NuLu. “Those kinds of places are everywhere in Georgia and around that area,” he says. In addition to “monstrous” biscuit sandwiches, the restaurant will offer salads, oatmeal, hash browns, espresso-based coffee drinks and breakfast cocktails like Mimosas.

PEOPLE ARE BECOMING SO MUCH MORE KNOWLEDGEABLE ABOUT FOOD AND COOKING. DO YOU WELCOME THAT OR DOES IT MAKE YOUR JOB MORE DIFFICULT?

Probably both. It’s like competition. Both push you to be better. But it’s also bad in the way that they can cook three or four courses over two hours for their family and think that gives them the ability to critique a restaurant that cooks for 200 people a night. They may say they would have done this and that be- cause “I cook at home. You should seriously consider how I do things.” Sometimes that’s not practical in a busy, commercial setting. At the same time, if palates are becoming more sophisticated and consumers are more edu- cated, you can push the envelope a little bit.

WHAT ADVICE DO YOU GIVE SOMEONE WHO SAYS SHE’D LIKE TO OPEN A RESTAURANT?

Too many people think owning a restaurant is like a hobby. It would be extremely hard to have another full-time job and just do this with a friend. I wouldn’t discourage someone from doing it but I would tell them to be sure they know what they’re getting in to. We didn’t, but we had people who did.

DO YOU COOK MUCH AT HOME?

I like to eat fairly healthy so maybe three nights a week we get a meal prep kit like Green Chef. I’ll be honest. I may cook one meal a week and my wife does the other two. My job is grilling.

HOW DO YOU LIKE TO SPEND YOUR SPARE TIME?

I’m an avid Georgia sports fan. My wife and I love to go to Georgia football games.

WHERE IN THE WORLD AND WITH WHOM WOULD YOU MOST LIKE TO HAVE DINNER?

With Herschel Walker in any random BBQ/ Soul food joint in South Georgia.

IF SOMEONE WERE TO GIVE YOU A FOOD- OR WINE-RELATED GIFT, WHAT WOULD YOU HOPE YOU’D FIND IN THE GIFT BOX?

Some sort of pairing with chocolate and Port or a nice oaky bourbon and chocolate.

− Add Brussels sprouts to a pot of boiling water for 45 seconds. Drain, then immediately place the sprouts in ice water. After they have cooled, lay them out on a towel to dry. Grill the corn or roast it on a gas burner. Alternatively, broil it on a cookie sheet. Remove corn when tender and slightly browned. Cut off kernels. After Brussels sprouts are dry, place them, face down, in a well-oiled cold sauté pan on medium heat. Flip them over when they start to pop. Place peppers and corn in a medium-size mixing bowl. Add Brussels sprouts to bowl. Lightly mix in vinaigrette.

− To serve: Place the mixture on a plate. Garnish with extra cilantro leaves.

The executive chefs in each location have the freedom to change about half the menu that reflects a Southern influence. Some dishes, such as the Brussels Sprouts salad, loaded tots and fried chicken tacos, make the cut at every LouVino.