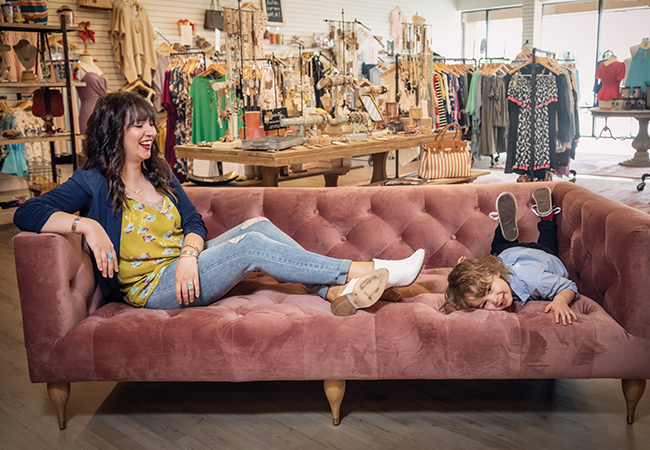 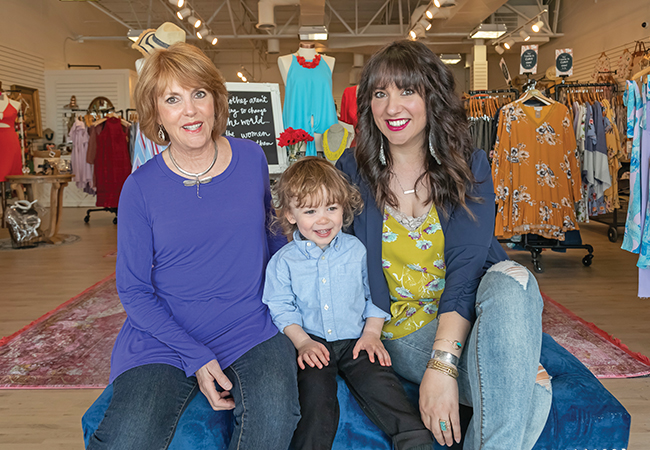 You might know Stephanie Susemichel as the owner and proprietor of Magnolia and Fig, a wonderfully personalized boutique in Middletown. She took time out to share her experiences with the challenge of balancing business ownership with motherhood, what her mom has taught her about life along the way, and how being a mother to a little boy has become the driving force in her life.

When talking to Stephanie Susemichel, anyone could tell that there are two inextricably linked things about which she is deeply passionate: her 2-year-old son Emerson and her charming boutique, Magnolia and Fig. "I opened the store when I was pregnant with him," she says, "And from that point to now and forever, I look at him and I know that he is the reason why this store is so important to me. They're growing together."

Stephanie's own mom, Cheryl Susemichel, set a lovely ex- ample. When Stephanie was 7-years-old, Cheryl opened Secret Garden, a charming gardening shop. While as a child Stephanie dreamed of one day working in a conventionally creative field, perhaps as a fine artist, she found that as she grew to adulthood she had a real aptitude for business. She applied that to a career as a buyer for Whole Foods Market. "I'm really self-directed and super disciplined," she says, "And that job really taught me a lot about prioritizing and business in general." After five years at that job, she decided to combine her creative spirit with the acumen that she developed and followed her passion and mother's example. Magnolia and Fig was born, right in the same Middletown shopping center as Cheryl's store.

Stephanie's vision for Magnolia and Fig has come to fruition beautifully. "My dream for the store was to have a place where women could find beautiful, unique, and inexpen- sive clothing of great quality and timelessness," says Stephanie. "There's a quote that we have here that I love- 'Clothes won't change the world, but the women who wear them will.' What you wear is such an empowering thing, they are the thing that brings you into your confident self. We have customers of all ages and body types coming into the store at all different stages of their lives. I know that I can get them the clothes that will make them feel strong, and that's why I do what I do."

Setting an example as a strong woman to Emerson is something of massive importance to Stephanie. "It's a big deal for me that he sees his mom and other women be- ing independent and doing big things and that he's growing up with a sense of value to his feelings," she says. "He's already such an amazing person. He's a happy little boy. He's smart, funny, and so intuitive. I had always been one of those who said that I would never have kids, but being with him now, I couldn't imagine life without him. He's so grounding. Everything that I do is for him."

Like so many of us, Stephanie does strug- gle with finding a balance. "There's a certain trap that so many women fall into, which is this situation where we are often expected— by those around us as well as by ourselves— to work like we aren't mothers and to be mothers like we don't have to work. I'm a Type A personality with a lot of OCD tendencies, and I'm a complete perfectionist. It's been a challenge for me, but I've finally reached the point that I can let go just a bit and ask for help."

Stephanie's partner and Emerson's father, Luke, is a constant source of support. "Emerson looks like me, but he has his father's exact same personality. I always say that I have these two little buddies at home. They have the same senses of humor and both have big personalities. We have an incredibly supportive relationship, I think because we were coworkers at Whole Foods Market first, then became friends and we grew from that. He's very supportive. There's never any guilt trips!"

Some of that help has also come from Cheryl. "It's an interesting thing, that way you build a new sort of status quo with your parents as years go on. You must figure out a new sort of relationship anyway, but hav- ing a kid definitely impacts that. She's such a source of knowledge. There's a whole reservoir of wisdom that I have a new perspective on seeing her with him and hearing her advice. It's only made our bond stronger, and she's more than happy to spend a day a week with her only grandchild!"

So, what's the future look like for Stephanie? "I would like to own more businesses. I love Savannah, Georgia, and I could see putting a Magnolia and Fig there one day. It would just be tough because I would really have to trust other people with so much more than I'm used to because it's no easy drive to Savannah and back here to Louisville!" It's an easy thing to imagine that as Emerson grows into a fully formed adult, Stephanie will similarly guide Magnolia and Fig to greater heights. After all, they're practically siblings.

I opened the store when I was pregnant with him. And from that point to now and forever, I look at him and I know that he is the reason why this store is so important to me. They’re growing together.