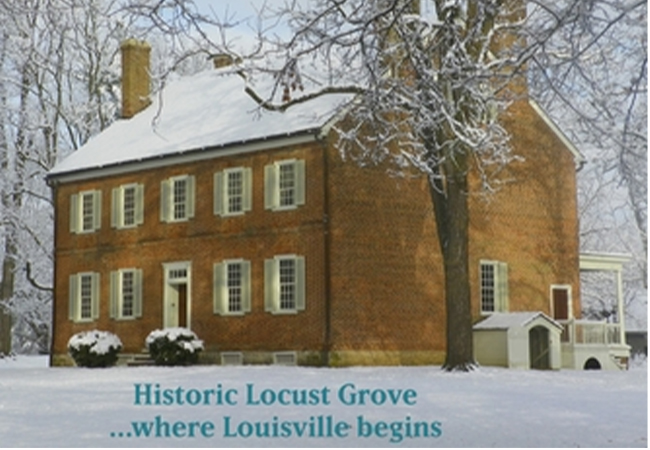 Louisville—Historic Locust Grove, a National Historic Landmark established c. 1792, is excited to welcome a series of guest speakers for three evening events celebrating The Age of Hamilton and the first three American Presidents, as well as the refreshments they enjoyed during their lifetimes.

The Punch with the President evenings are part of The Age of Hamilton series at Locust Grove that looks at the personalities and events of the era of the American Revolution through the Early National period in depth. Washington, Jefferson, Burr, and Hamilton all were part of the world of William Croghan of Locust Grove and George Rogers Clark, founder of Louisville.

The Punch with the President events will focus on the lives and libations of the presidents, beginning with John Adams Speaks on March 15, 2019 at 6:30 pm. Portrayed by nationally-known interpreter Peyton Dixon of Historic Experiences, the second President, John Adams, will discuss his devotion to Independence, his time in the First and Second Continental Congress, his term as the first Vice President of the United States, and what it was like to follow George Washington as President. Guests will be able to enjoy alcoholic and non-alcoholic beverages including an alcoholic punch from a period recipe, as well as beer and wine. In the late 18th and early 19th centuries, punch of various recipes was a popular beverage that served the function of cocktails in our modern-day celebrations.

The second Punch with the President event focuses on the father of our country with George Washington, The Founding Fathers, and Their Spirits: Alcohol, Politics, and Consumption in Early America on Wednesday, April 3 at 6:30 pm. Upon his death in 1799, George Washington owned one of the largest whiskey distilleries in the United States. John Adams preferred hard cider and a variety of beers. Thomas Jefferson was a connoisseur of French wines and champagne. Senior Historian of the White House Historical Association Dr. Matthew Costello will discuss how to drink like Washington and his contemporaries in this lively evening of history and historical refreshments.

The series will continue on Wednesday, May 22 at 6:30 pm with Thomas Jefferson and George Rogers Clark, presented by Locust Grove historian Gwynne Tuell Potts. Thomas Jefferson and George Rogers Clark were mutual supporters in military ventures and politics, as well as in the exploration of western lands. The two men, who grew up just a few miles apart in Albemarle County, Virginia, shared an interest in natural history, prehistory, and in Native American lore and language. Their correspondence over many years is a window into the conquering and development of the early American west. From excavating Mammoth bones to confiding about political intrigue, Potts will reveal the respectful bond between two very different personalities.

“As William Croghan and George Rogers Clark moved in the same circles as Washington, Adams, and Jefferson, it would be impossible to resist raising a glass while we raise our understanding of our first presidents,” notes Program Director Brian Cushing. “We’re excited for the opportunity to explore period alcoholic beverages while delving into the issues of the early days of American Independence.”

Admission to each Punch with the President event is $15 or $12 for Locust Grove members. Admission includes one drink ticket. Reservations are required; please call 502-897-9845 for tickets and information.

A full calendar of The Age of Hamilton events and more information can be found at www.locustgrove.org/revolution.

For more information about these events, please contact Hannah Zimmerman, Marketing and Communications Director, at [email protected] or call 502.897.9845 x108.