DIARY OF A RHINOPLASTY 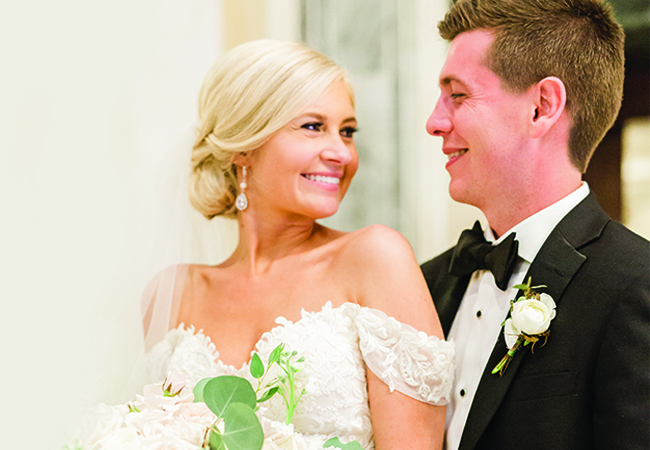 A bad fall, fractured nose and unplanned trip to the ER were the catalyst for corrective surgery that gave Maggie Yates the slightly smaller, straighter nose she always wanted in time for her wedding day. Here, she and her surgeon, Dr. Jarrod Little, share everything you need to know about this popular procedure.

While Maggie Yates never seriously considered a nose job, she also never loved her nose. “I always felt it was a little too large for my face,” she says. Then one fateful fall down a flight of stairs made rhinoplasty not only a reality, but a necessity. “It happened really fast. I passed out and fell down a flight of stairs and fractured my nose,” she says. “It was pretty traumatic. I was out of town and had to go to the ER. I was in nursing school, so I knew it was time sensitive.  I did some research online about surgeons and my mom took me to see my first choice, Dr. Jarrod Little, as soon as I got home.”

She had chosen Dr. Little because he   is an expert in closed rhinoplasty, a less invasive procedure that yields excellent results with less bruising and downtime and he was highly recommended. “I knew he was the surgeon for me, but I was still nervous,” she says. “The nose is the focal point of your face; making any change to it is a little intimidating. While I didn’t love my nose before, I had never considered surgery.”

During the consultation, Dr. Little let her talk first, then he pointed out corrections and refinements he could make both on her face and on an iPad. “There was definitely some give and take,” says Maggie. “I felt extremely comfortable. He mentioned a few subtle things he could do, like adjust the tip of my nose so it was tilted upward rather than downward and he spent a lot of time listening to my concerns.”

A lot of her anxiety was alleviated when he discussed the closed technique in detail. “There are no incisions; it’s all done internally,” she explains. “So, there is no packing afterwards (a post-surgical treatment which involves stuffing the nasal cavity with gauze) and, typically, less pain and swelling. I felt much clearer and calmer about what to expect after surgery… which was good, because then he looked at me and said he could get me in first thing in the morning.”

Dr. Little wanted to move quickly because of the fracture. “It’s important to perform the surgery before the bones begin to set,” he explains. “She was already a few days out from the injury. Once I examined her, I knew we’d get the best result if we could operate immediately.”

So, Maggie quickly went from consultation to patient— running home to pack a bag and prepare for her first-ever surgery. “I went there that morning and they gave me some medicine that made me feel great. It’s out patient, but you’re under anesthesia. As a nurse, I knew just enough to be scared, but they put me at ease.” A few hours later, she was home on the couch, napping. “I took one pain pill and I don’t think I ever took another,” she says. “There was much less pain than I expected, and I only had a little splint on the bridge of my nose. I was a little freaked out because I was swollen, so I really had to trust him, but he had warned me about that. The hardest part was remembering not to touch my nose.”

She took a week off work, texting Dr. Jarod photos every day so he could see how she was progressing. “I slept on the couch, surrounded by pillows so I couldn’t roll over and hit my nose. There was a little bleeding inside my nose but not much. By the time I saw him in the office that weekend, he took off the splint.

The second week, still slightly swollen, she went back to work. “I felt like a little concealer under my eyes was enough. If you didn’t know me, you wouldn’t have known I had surgery.”

Still, it took months for the nose and the swelling to subside completely and for the nose to completely heal. “I was really happy at about six weeks to two months, but I waited four months to schedule my engagement photos and my nose looked great by then, but it looked even better nine months later at my wedding.”

This bride, in the end, is living happily ever after with her new and improved nose. “I got exactly what I wanted, but no one would ever look at me and think I had a nose job. I also saw my results a lot sooner than people would have with an open rhinoplasty, but I think it’s important for people to understand the process. It’s life-changing, but it’s not instant gratification.”