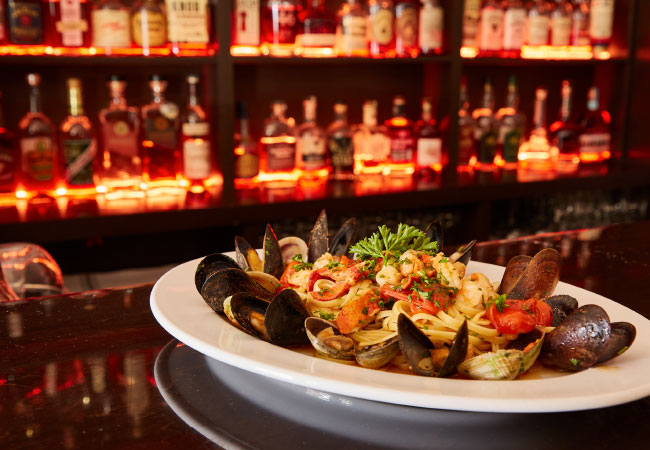 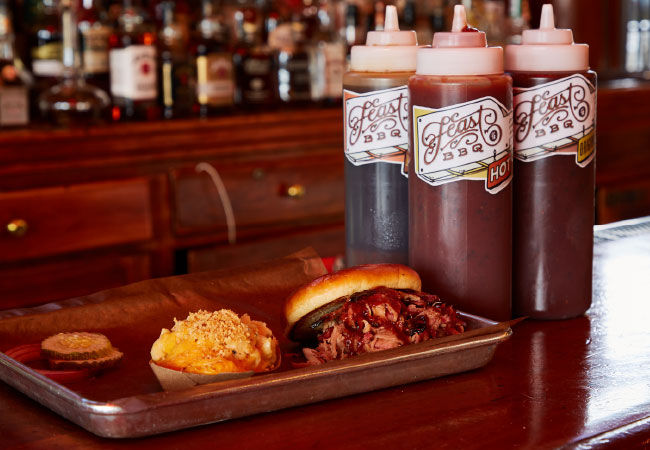 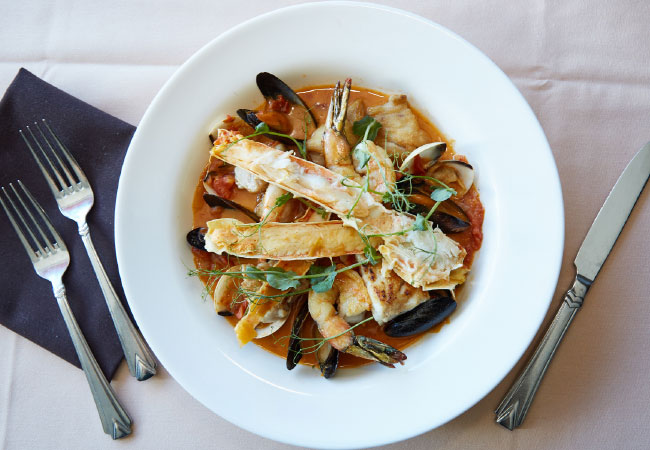 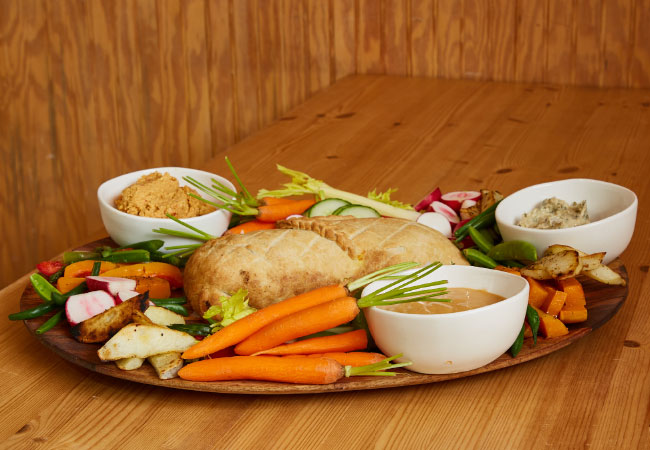 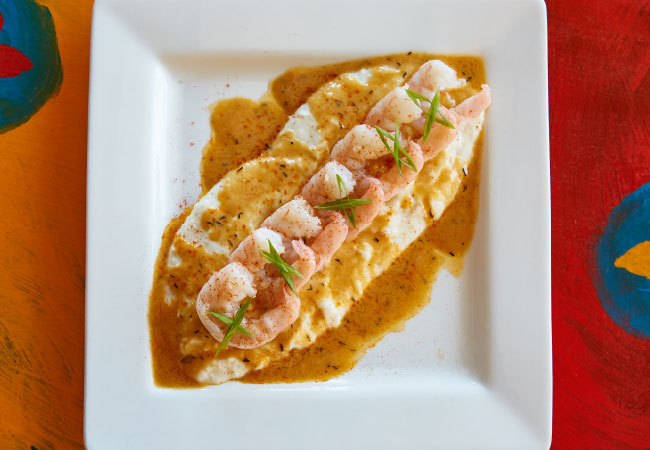 With all of the gatherings you’ll enjoy this season, there will be moments when you’ll be glad to let someone else do the cooking. Here, a few sure crowd pleasers.

ROC has a vibe all its own…energetic and always hopping, thanks to the crowds who bring their own spirited camaraderie to the restaurant. Also fueling that hopping energy is owner Rocco Cadolini who bustles about spreading the love of all things Italian. He’s happiest when you’re eating up the love in the form of his antipasti, carpaccio, salads, soups, pastas and specialties like pork sausage with roasted peppers and potatoes, and veal scaloppine.

You may not be able to take Rocco himself home with you, but he’ll pack up some of the dishes that are bringing a heaping portion of ROC fame to Louisville. “When you cook at home you have to prep and cook and clean up. With Rocco, there’s nothing to do other than eat,” he says. He’s a man after the heart of all of us who want to have it all without doing all the work.

Most of ROC’s menu travels well but Cadolini will recommend which dishes are the best travelers. We asked him for a few ideas to get you started. Before you and your guests are ready for the main course, you might want to kick things off with a cheese plate or burrata with vegetables and a balsamic reduction. And go for the prosciutto with Parmesan and olives. Chicken Parmesan or meatball sliders are fun party or family night fare. When we say be picky about the pastas, we mean pick more than one. They’ll pair perfectly with pork loin Parmigiana.

For dessert, don’t even pretend you don’t want the tiramisu. We and Rocco know you do.

There may be someone out there who doesn’t like barbecue although where they’re hiding, we don’t know. They have never crossed paths with Feast BBQ chef and owner Ryan Rogers who says, “Why is barbecue so popular? It goes back to our time as cavemen and women when we figured out we could roast meat over fire.”

You don’t have to worry about the fire or the roasting. Feast BBQ has it all figured out. Just call them and tell them you’re going to have a take-out barbecue get-together. Make that a barbecue feast. Get it?

Head up your order with a couple of pulled pork sandwiches served with a side of macaroni and cheese. If you’re a die-hard fan of mac and cheese, they also come in crispy balls. Put those on a platter with fried pickles and loaded tots and you’ll have to fend off the hugs and kisses from your kids, your guests and strangers who stop by because they know something good is going on.

In addition to pulled pork, Feast has brisket, chopped chicken, smoked tofu and pork ribs that can be ordered as sandwiches, plates or by the pound. Round out your menu with salads, tacos and sides such as collard greens, baked beans, slaw and potato salad.

Rogers says don’t forget the pork cakes. “They’re fried and served with barbecue sauce and coleslaw on top and some local sorghum,” he says. “It’s one of those dishes that people are hesitant to eat but then can’t stop eating it.”

Anoosh Bistro is regarded as one of Louisville’s finest restaurants. Now, your to-go order can be just as fine.

Chef Mark Ford and his staff are ready to be your behind-the-scenes kitchen crew for some four-star take-out. For an appetizer, he suggests arancini (fried risotto balls with tomato sauce and saffron aioli.) The roasted baby beets salad, lobster bisque and soup de jour are all fall favorites. The soup is made according to the chef’s whim. Ford’s whims are legendary, so you can’t go wrong.

“The mushroom pasta has a rich, thick mushroom-truffle cream sauce with Parmesan that is a nice pasta course when it’s chilly outside,” says Ford.

Step up your take-out imagination with Anoosh Bistro’s cioppino, a seafood stew full of fresh fish, shrimp, clams, mussels and crab legs, thats great for sharing. Or Ford will be ready to send you home with a braised short rib paired with spaetzle, pickled red cabbage, butternut squash purée and Dijon crème fraiche jus. The duck and dumplings, with seared duck breast and matzo ball dumplings in a rich broth, is a play on traditional chicken and dumplings. (We’re kind of crazy about the way Ford plays!) Warm bourbon-sorghum pecan pie can bring a sweet southern end to your meal.

“Immediately eating the dishes is probably the best way to enjoy our take-out but if you’re not quite sure of the dinner time, we’ll be glad to include heating instructions,” says Ford.

“We have a lot of customers who say they don’t know what to serve friends and family who are vegan,” says Tina Gao, who along with her mother Sue Zhao, owns Half Peach Bakery & Café. She sends them off with vegan dishes that are so flavorful they can fool a carnivore at the same time they’re treating vegans to luscious and imaginative fare.

Many Half Peach customers aren’t vegan but are looking for a light meal and a fun way to eat their vegetables. The café’s wraps, sandwiches, soups and bowls are palate pleasing veggie surprises.

Gao is gearing up for a busy season in which customers stop by on their way home from work to select dishes for a last-minute dinner or let her and Zhao know in advance about a party that’s being planned.

A variety of vegan spreads, most of which are also oil-free, include spinach artichoke dip, cashew queso, sunflower queso, pimento chickpea, and pesto. The vegan Wellington adds a festive spark to even a casual dinner. For it, puff pastry is filled with roasted squash, chestnut stuffing, spinach, kale, cranberries and mushrooms.

“Our baked beans, made with a ton of fruits and vegetables, is oil-free, gluten-free and super addictive,” says Gao.

Half Peach was first established as a bakery and continues to welcome a loyal following of sweet lovers. Gao says the pumpkin cashew cheesecake and the pumpkin spice latte cake would be the perfect ending for carnivores and vegans alike.

Lou Lou Food + Drink knows exactly what you need when you want to take a break from seasonal turkey, stuffing and mashed potatoes. “Something from the bayou, a little Cajun flair, is a nice change,” says chef and owner Jared Matthews.

Before you wonder if Cajun might be too spicy for your family or guests, fret not. Lou Lou has plenty of dishes that aren’t shy about their spiciness. But there are just as many that aren’t spicy at all, just satisfying and gratifying in that unique ´Nawlins sort of way.

Asked about his favorite dishes for take-out, he’s quick to say shrimp and grits, pasta carbonara and crawfish linguini. Is that his final answer? No way. He’s only whetting your appetite.

Wild Bill’s Famous Cajun cheese and breadsticks and the bayou dip are nibblers that will disappear in a flash. And the she crab soup or Chef Clay’s Famous Gumbo will make you think you’re partying in New Orleans’ French Quarter. Now that you’re all in for the Cajun thing, Matthews can send you off with crawfish etouffee, red beans and rice and jambalaya.

Lou Lou is also known for its black bean lasagna, smoked chicken and marsala bowtie pasta, and linguini and meatballs, so you may not want to complete your take-out order without one of those.

If the kids say, “Why can’t we just have pizza?” tell them Lou Lou is in their corner, with many of the usuals as well as short rib Philly, goat cheese vegetable and lasagna pizzas.