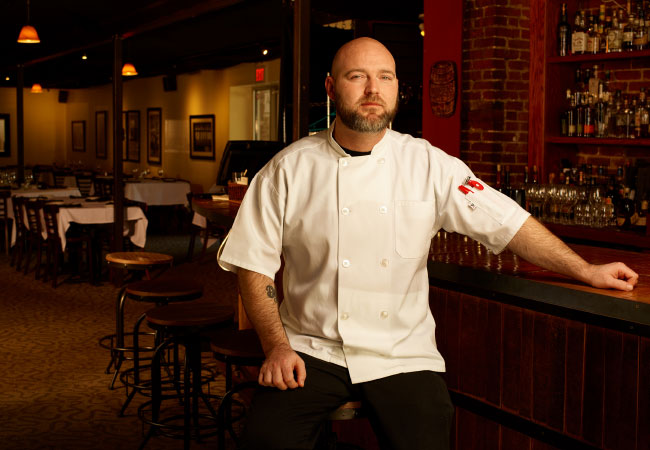 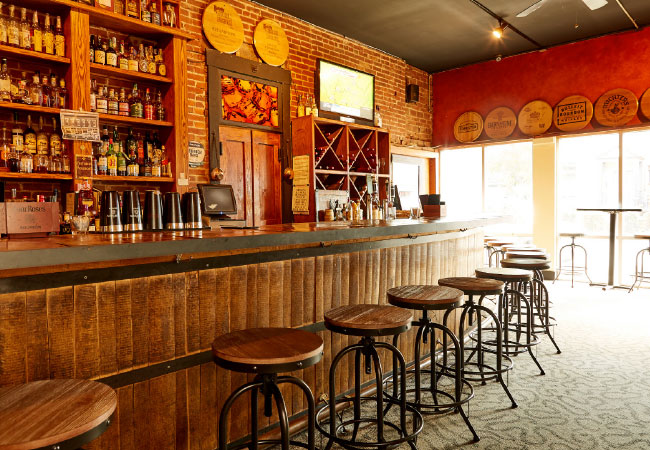 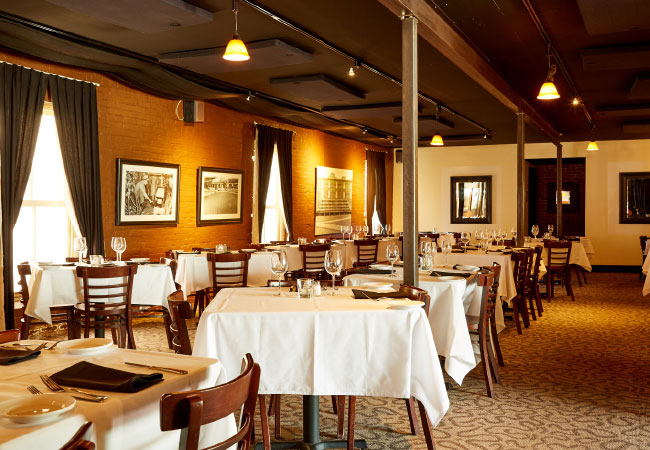 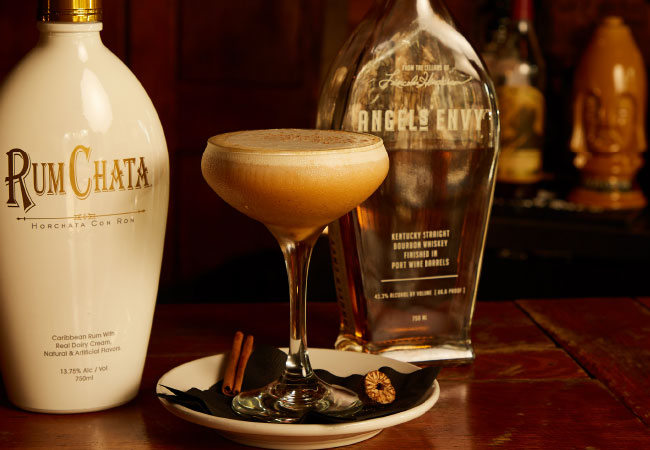 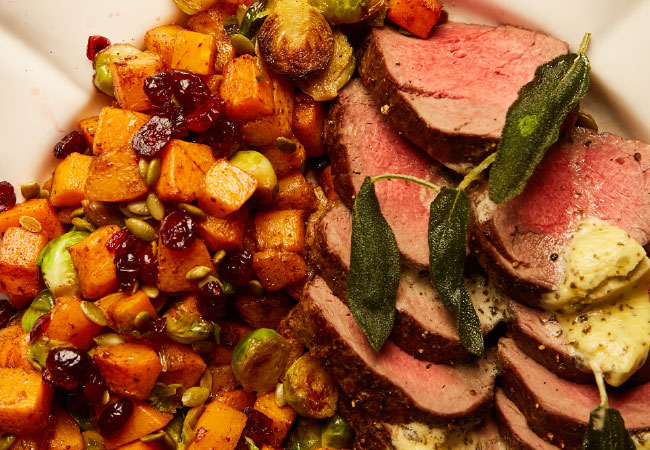 Under Jereme McFarland’s guidance, Bourbons Bistro has become a destination for sophisticated fare with a southern accent… or local favorites with an elegant twist. Either way, you’ll clean your plate.

Jereme McFarland took an unusual route to be named the top dog at a top-tier restaurant. He joined the Marines to become a cook. “It worked out well for me. I attended cooks' school at Ft. Lee. It was there I learned the basics and got a good foundation for understanding an organization that’s run tightly…. Rarely was there chaos. Everything was on schedule,” says McFarland, now the Executive Chef at Bourbons Bistro.

The eight o’clock dinner rush at Bourbons Bistro sure isn’t like the Marines chow hall. He describes the former as driving a race car as opposed to the latter which was like driving a school bus.

At the restaurant, the work comes in waves. There are times the kitchen is slow and other times it’s madness. He loves it.

“The good and the bad, whatever happens, it’s on me. If I create a good dish, I get immediate positive feedback, but if things fall apart, that’s also on me,” he says. He’s used to the pushback he receives when he changes the menu. Replacing shrimp and grits with a lighter dish in the summer doesn’t go over so well with some customers. When he takes cheesecake off the menu, the question he often hears is, “When is it coming back?” He’s ready for the same question when the current pumpkin cake is a menu no-show.

He walks a fine line between casual and fine dining. The shrimp and grits are a good example of the walk. “It’s basic southern cuisine but all kinds of chefs around town jazz it up to make it a little fancier. That works for them, but I like to keep it simple and classic. And fine dining would probably mean a smaller dish, but ours is a full-size portion,” says McFarland.

He acknowledges that there’s a trend toward healthier, lighter eating but says his customer base isn’t deep into that shift. He has some lighter dishes and vegetarian options on the menu but admits, “I’m just not that good at vegetarian food. I like bacon and pork and fat and butter.” His idea of a perfect meal for himself is fried chicken or pot roast or lamb chops. “I hate to say it, but I like heavy southern food that makes you want to take a nap after you eat it. I eat a light breakfast but at dinner I like to enjoy the meal and lay back and watch television. Steak and potatoes and green beans with bacon or ham hocks would be fine. And some cornbread.”

“I’m just not that good at vegetarian food. I like bacon and pork and fat and butter.”

That doesn’t mean he wouldn’t stray from southern eats when given the chance. He’d like to travel, going country to country, border to border, to delve into Mediterranean food. He’d feast on bold flavors, cured meats, seafood and cheeses.

The Bourbons Bistro chef has “tons and tons” of cookbooks. His current favorite is The Escoffier Cookbook and Guide to the Fine Art of Cookery. If you’re a fan of cookbooks with pictures, it’s probably not for you. It delves into the minutiae of cooking and is a serious culinary tome. But, hey, it would be an impressive addition to your shelf of cookbooks!

Bourbons Bistro isn’t open on Thanksgiving. What are your plans?

I’m from a gigantic family. I usually go to my mom’s or sister’s house, sometimes my brother’s. I cook for a living. At Thanksgiving, I let other people do the cooking.

Is it stuffing or is it dressing?

For me, stuffing is inside the turkey. In a baking dish, it’s dressing.

Bourbons Bistro has an incredible selection of bourbons. Which is your favorite?

Is there any request that diners make that you hate?

What are the must-have cooking tools for the home cook?

A 10-inch chef’s knife is number one. A standard cast-iron skillet. I inherited my mother’s skillet. It’s probably older than I am. Actually, I kind of stole it from her. She’s never getting it back. You also need some heavy-bottom stainless steel pans, a non-stick skillet, food processor and a whisk.

What do you do when you want to chill out?

Watch You Tube videos. And I invite friends over. We have a couple of drinks, play darts and hang out on the patio. I also like to shop at peddlers’ malls. I collect junk artwork.

Would you like to someday own your own restaurant?

That’s my long-term goal. It would be southern cuisine and would have a classy bar.

Combine all ingredients in a shaker tin. Fill with ice and shake for 15 seconds. Strain into a coup glass and garnish with whip cream and a sprinkle of nutmeg.

1 cup sugar in the raw

Combine all ingredients in a sauce pan and simmer for 45-50 minutes until sweet potatoes are soft.  Purée with an immersion blender and add cinnamon.  Let cool before making cocktail.

For the beef tenderloin

Clean all silver skin from the tenderloin. Season the beef heavily with kosher salt and cracked black pepper. Lightly coat with oil and roast at 500º for the first 15-20 minutes. Reduce the temperature to 350º and cook another 20 minutes until 135º internal temperature is reached, or until desired doneness. Allow to rest, covered, for 20 minutes.

For the sage butter

Bring butter to a boil and reduce to a simmer. Add all ingredients to the simmering butter and cook until golden brown. Remove from heat and immediately place the hot pan in an ice bath to stop the cooking process. Refrigerate until just soft but not quite firm. With a mixer, mix the butter mixture on high speed until the butter turns white. Mold into a log on parchment paper; wrap in plastic and place in the refrigerator until butter becomes stiff.

(Both of the vegetables should be roasted at the same time on separate pans. Start the tenderloin 20 minutes before the vegetables.)

Salt and pepper to taste

Toss the diced squash in the olive oil. Season with cinnamon, nutmeg, salt and pepper. Roast at 375-400º
for about 20 minutes or
until tender.

Cut the ends off the sprouts and slice sprouts in half. Lightly oil or butter a sheet pan. Place sprouts, cut-side down, on the sheet pan. Lightly drizzle with oil, and salt and pepper to taste. Roast at 375-400º for about 20 minutes or until tender.

Combine the squash and sprouts in a mixing bowl. Toss in cranberries and pepitas. Make a bed of vegetables on the bottom of a large serving platter. Place the roasted and sliced beef tenderloin on top of vegetables. Slice or crumble the sage butter on top. As an added optional garnish, fry the sage leaves in oil for about one minute. Place on top of the butter.