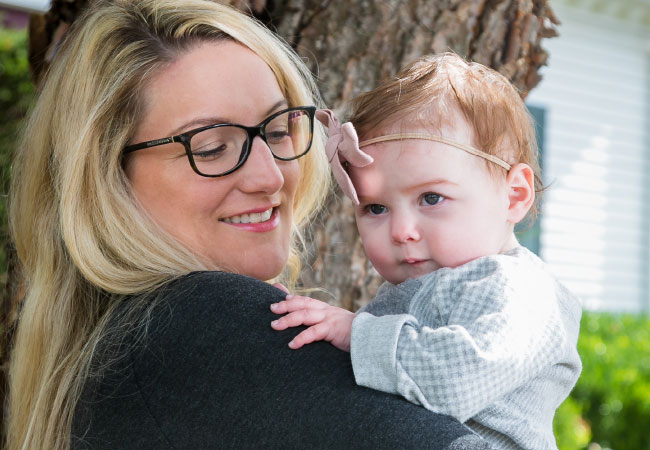 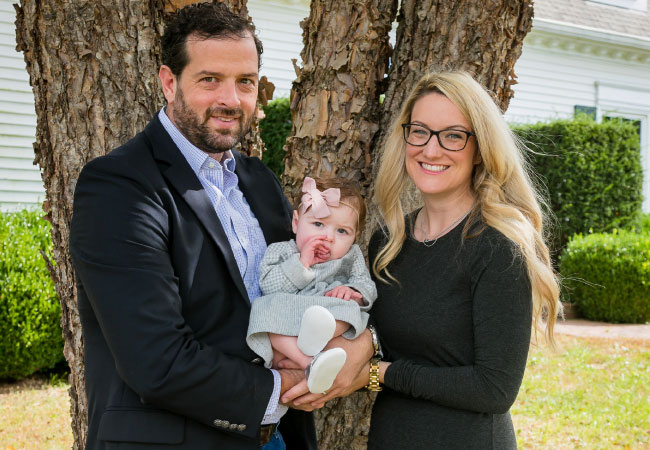 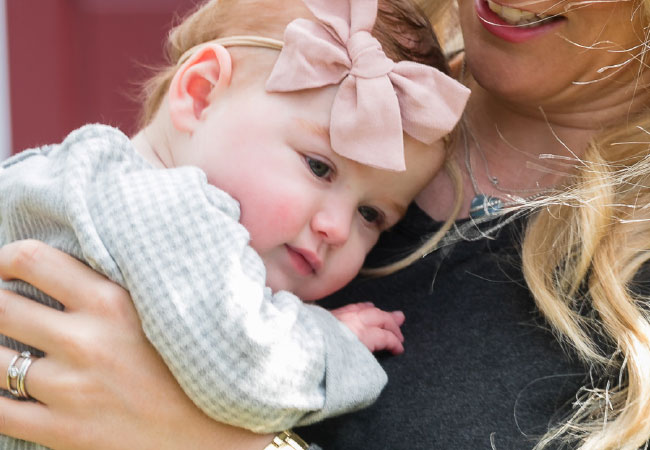 Her first year of motherhood has been a remarkable testament to her courage and her incredible ability to focus on moments of joy with her miracle baby, Stella. Here, Mari-Elise shares with Nancy Miller the story of our city’s youngest heart transplant patient.

Mari-Elise and Bruce Paul have persevered through a year of emotional agony and heartbreak. The routine ultrasound performed when Mari-Elise was 34 weeks into her pregnancy was the first indication that her baby likely had heart problems. Later tests were inconclusive but suggested three possible conditions. The anxious couple was told the actual issue would be revealed at birth.

“I was extremely scared,” says Mari-Elise. “You feel a sense of despair and ask how can this be happening. You worry so much for your child. We had family and good friends around who were helpful but most of my support came from my husband who was the rock while I was emotionally up and down. He’s very stable and manages highs and lows very well.”

Last year, on November 15, she gave birth to Stella by C-section at Norton Hospital. Stella was immediately transferred to Norton Children’s Hospital and placed in the Neonatal Intensive Care Unit (NICU.) The Pauls were relieved that an echocardiogram showed only that the heart muscle looked a bit thick and that Stella had a couple ventricle septal defects between the ventricle walls. Her parents were told that the holes usually close on their own. If not, she could have a procedure to close them.

Mari-Elise and Bruce, both attorneys with Stites & Harbison, took Stella home on November 20. She was having trouble gaining weight but otherwise was doing well until the morning of December 27.

Stella wouldn’t stop crying. Marie-Elise picked her up and intuitively knew something was wrong. Bruce said it was time to go to the ER. “I was sitting in the car holding her. Her head started to go back and it was difficult for her to get air. She started arresting. We wouldn’t be able to make it downtown to Norton Children’s, so we went to Norton Women and Children’s Hospital. All the stars aligned. There was no traffic, no stop lights,” says Mari-Elise.

Stella coded while she was in the ER. “The nurses took her out of my hands and intubated her. It was all hands on deck. My husband walked in from parking the car and saw them drilling epinephrine into her shins,” she remembers.

After the baby was revived, she was transported by ambulance to Norton Children’s Hospital where she coded again. Her parents were able to stay with Stella for a while but were escorted out of the room when the staff was ready to put her on life support.

A week later, Stella had improved enough to no longer need life support. Her parents had not left her side for the entire week. However, she was not able to be taken off the ventilator. A procedure showed that four times the amount of blood was being shunted to her lungs than would be typical for a normal heart. She was too small to undergo a full repair, so a palliative fix was the only option. A band was placed around her pulmonary artery to restrict blood flow from her heart to lungs.

Initially concerned that Stella would be blind, wouldn’t be able to move the left side of her body and would have language difficulties, the Pauls learned she would not have those complications.

After being released to go home, an emergency trip to the hospital resulted in the Pauls being told Stella had heart failure. Treating the condition with a combination of medicines was not successful. Mari-Elise and Bruce were told it was time to list their baby for a heart transplant. She was 1A listed, which means someone is an in-patient or is on a ventricular assist device, but the Pauls were told the wait for a heart would be 6 to 7 months. Stella would be hospitalized the entire time. Mari-Elise stayed with her every night.

At seven o-clock on Saturday, July 21, Mari-Elise received the call that Stella would be given a new heart. “It’s not a happy time when you get the call. We struggled with the fact that someone else was living their worst nightmare so our baby could live,” she says.

“All you think about for those few days is what that family is experiencing, how hard it must be to say goodbye, and how generous they were to make this gift of life in such a difficult time.”

She and her husband held Stella as they took her into the operating room for the transplant, telling her how much they loved her and that they would see her in the morning. Mari-Elise says they felt Stella was in the best hands with Erle H. Austin III, M.D., chief of cardiovascular surgery at Norton Children’s Hospital and cardiothoracic surgeon Deborah Kozik, D.O. with University of Louisville Physicians. “She’s a fantastic surgeon and is personally invested in her patients. As a parent, that gives you comfort knowing that you are set up for the best possible outcome to the extent that sending your child into surgery is comforting.”

The rush of emotions felt by the Pauls when they were able to see Stella the next morning is unimaginable for anyone who has not been a similar situation. “She was in her bed, sedated, with chest tubes coming out of her. There were multiple ICU nurses and attending physicians caring for her. It was frightening, but we were so happy and grateful that she had a successful surgery. And we were able to listen to her new heartbeat,” says Mari-Elise.

During surgery, Stella’s diaphragm was paralyzed,  requiring that she have additional surgery to correct it. “We got to hold her after surgery. Words can’t describe it. I wanted to squeeze her and never put her down.”

Six weeks later, Stella left the hospital for Frazier Rehab Institute where she spent a month in speech, occupational and physical therapy.

Mari-Elise says Stella’s doing great now but tempers that with, “I think, because you never quite know.” She’s on a regimen of medications and has frequent monitoring of the medicines in her blood.

“Mr. and Mrs. Paul know that Stella’s life expectancy is limited and will never be normal,” says Dr. Kozik. She says that the average lifespan of a recipient of Stella’s age is 10 to 12, perhaps 15 years. If Stella’s new heart begins developing complications, she could be evaluated for a retransplant. “Unfortunately, a second transplant heart lasts five to seven years,” says Dr. Kozik, “But medicine is advancing at such a rapid rate. It’s important to have hope that things will continue to improve in the future.”

Cautious optimism combined with gratitude is the outlook the Pauls have chosen to adopt. “It has been a tough road but Stella’s here with us,” says Mary-Elise. “One thing I struggled with is that this isn’t what I thought motherhood was supposed to be like. A wonderful psychologist talked to me a lot about redefining motherhood. That helps me be grateful for the time we have with her. It could be worse.”

She thinks about the people who made the decision that gave her baby new hope. “Every milestone Stella meets, we think about the donor family,” she says. “As a donor recipient, you may write the donor family a letter. The organ donation group facilitates the delivery of the letter. The family can write back if they choose. I wrote our letter a week after Stella received her heart because I couldn’t not let them know we were thinking about them all day every day and didn’t want them to think we were taking this gift for granted. I was worried it was too soon for them, so I said I hoped they saved the letter for when the time was right. They haven’t written back yet, but I hope they do if they want to.”