FLAVORS FROM THE EQUATOR 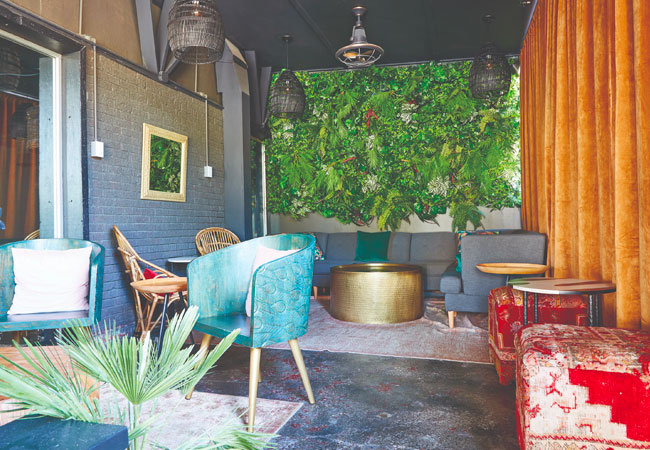 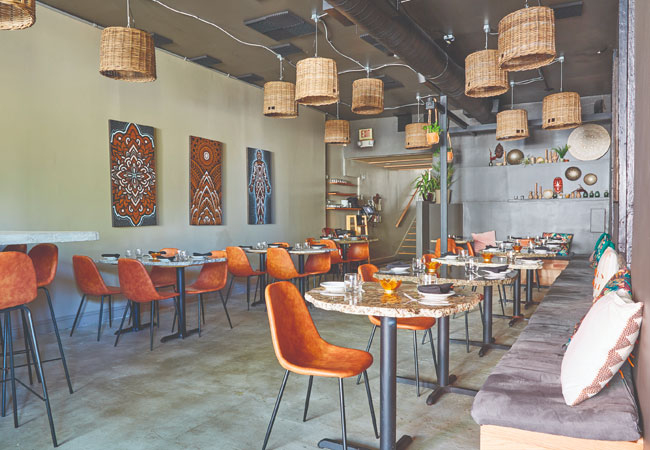 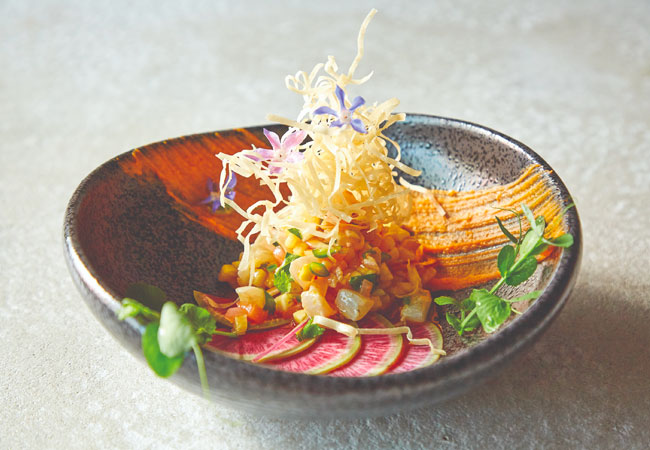 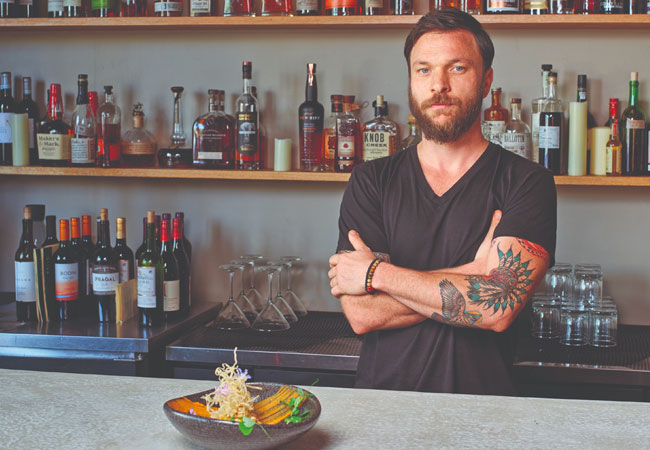 Pacific Equatorial cuisine is the theme of Adam Burress’ new restaurant, Ostra (Spanish for oyster). That’s a fascinating and complex cuisine to explore, and he does it with trademark Burress enthusiasm and super-charged energy.

The enigamatic chef and owner of Game, Hammerheads and Migo, Burress made the decision to open a fourth spot in Louisville’s highly competitive restaurant environment in another ambitious leap of faith. “I guess I have an illness that led me to want another restaurant,” says Burress. “It wasn’t something I needed to do but my evolution as a chef made me curious. I had been doing sort of a similar level of food in the other restaurants for so long that I was ready to test different waters. We went a little more upscale with Ostra and it kind of took me out of my comfort zone.”

Focused on sustainability and the footprint of the restaurant industry, he designed a menu around the most sustainable proteins and chose not to include terrestrial meats such as pork or beef.

“I’m very passionate about the planet and its wonderful creatures,” he says. “It behooves us to respect all of it and them.”

Some of the ingredients he avoided including on his menu are those he considers crutches used by chefs who prefer to “take the easy way out. If you can’t cook a good steak, you shouldn’t be cooking. It’s extremely easy to make pork or beef, even foie gras, taste good. Anybody can cook a steak and look like a genius,” he says. “The same thing with pork belly. You can almost forget about it and it will be amazing.”

Minus the pork and beef, his menu is an innovative panoply of bivalves such as

clams, mussels and oysters, all of which are exceptionally sustainable, as well as rabbit, fowl, vegetables, fruits and cheese.

Burress doesn’t stop there for a menu that deviates from that of most Louisville restaurants. Bugs are being lauded around the world as an excellent source of protein, so much so that they are purported to be a partial answer to food shortages in some countries. He isn’t squeamish about adding them to his menu. His cricket brownie, made with cricket flour, banana and coconut, and topped with candied crickets, has received kudos from customers, as have the superworms that are used as garnish for other dishes. He’s headed to Croatia for a vacation and plans to return with ideas for other bug-boosted dishes.

Bugs weren’t among the items he used when he was a contestant on Food Network’s  Chopped. He was slightly bummed when he found out the segment was to be about dishes made from sandwiches, as he thought that would be too easy. He did a quick mental turnaround when he realized the task would be anything but easy.

“Being on the show was the most fun I’ve ever had in my life. Period. I loved every minute of it. I didn’t win but I didn’t care. It was such an amazing experience. And, there’s no losing,” he says. “They give you a basket of food and 15 minutes to rummage through the pantry and tell you to go. It’s like being a world class pianist and having someone give you half a keyboard while you’re running from a pack of lions. But I didn’t feel like I had a weight on my shoulders. I was there to have a blast.”

He’s in the business of serving food but that doesn’t mean he’s all business about food. For him, eating is about so much more than sustenance.

“Food brings us easily at least fifty-percent of our daily joy. It has endless possibilities, endless ingredients."

"I try to take it to another level, not only with the consumption part but also with production. It blows my mind that people don’t understand how much more enjoyment they can derive if they understand more about where the food came from, all the avenues it took to reach the plate,” he says. “People put more thought into their work that can bring them misery than into their food that brings them ecstasy. Figuring out where and how something was raised, and getting into the integrity of food, that’s the real story.”

¼ cup juice of lemon and lime

Mix together all the ingredients. To serve: With a small paint brush, swipe some Sweet Potato Paint on the plate. Top with ceviche.

Juice of one lime

Peel and boil the sweet potato. Cut into pieces and whip till smooth. Whisk in all other ingredients.

The Inside Scoop with Adam Burress

Is there anything you’d like to eat but haven’t?

I’m sure I have barely hit the iceberg. I can’t wait to go to Japan and eat some crazy stuff out of their fish markets.

Is there anything you would never eat?

You’re a chef and restaurateur but the role of which you are proudest is that of dad. Your son Pax is two years old. How’s he doing?

He’s incredible and more beautiful every morning when I look at him. He impresses me every day and that tiny little voice is so cute. He can’t pronounce anything correctly and that’s adorable.

The world is such a tumultuous place. How are you preparing Pax to be part of it?

All I can do is smother him with love and show him how amazing the world is. The only way for him and everyone is to adopt a view that’s positive. The world is a pure miracle. Also, I will help him keep an open mind. Clinging to an ideology shuts you out of endless possibilities. It’s important to understand your ignorance.

When and where are you happiest?

Out in nature with my kid. When he’s laughing his ass off, the world stops.

With four restaurants in Louisville, you’re making a major impact on the local dining landscape. That must make you feel pretty darn good.

It does. I love what I do and I love the city. But, to be honest, I don’t wake up every morning trying to better the city. I just try to better myself. That other people like what I’m doing is the cherry on top.