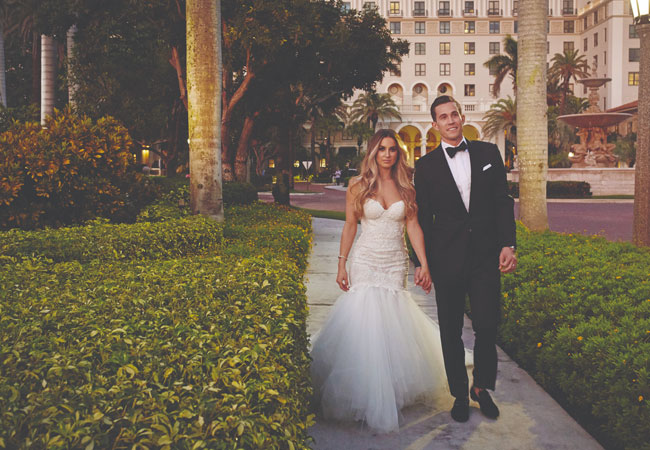 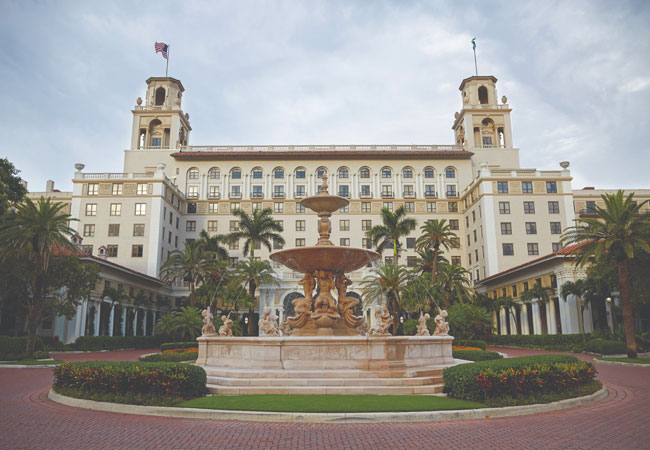 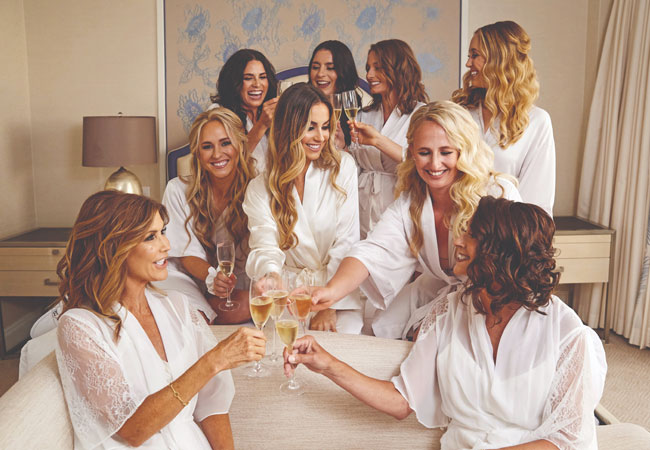 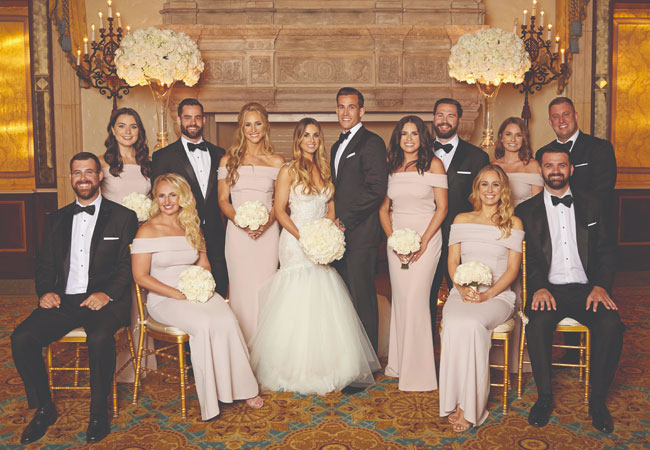 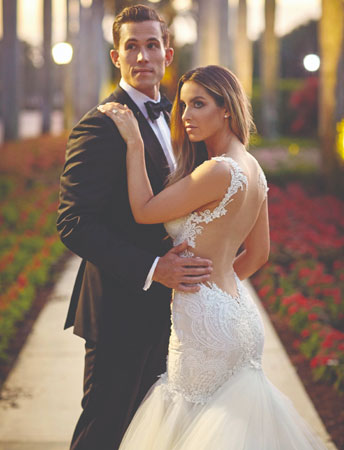 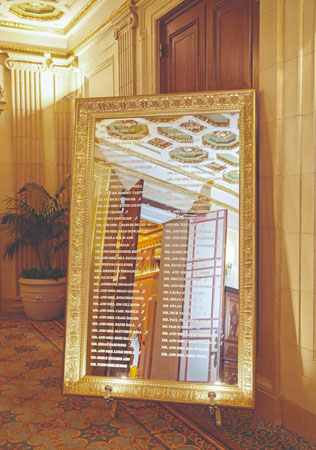 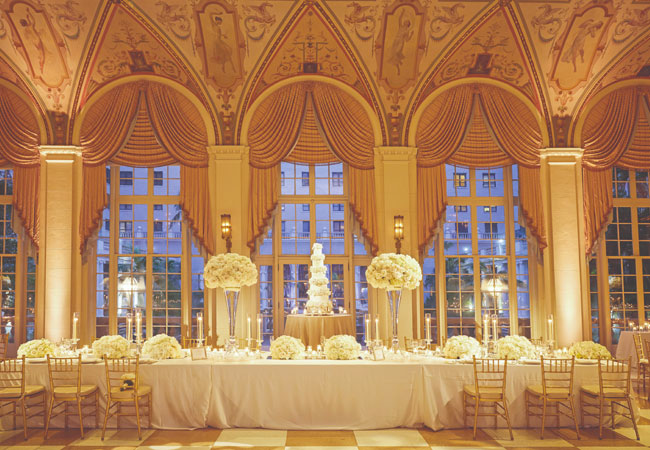 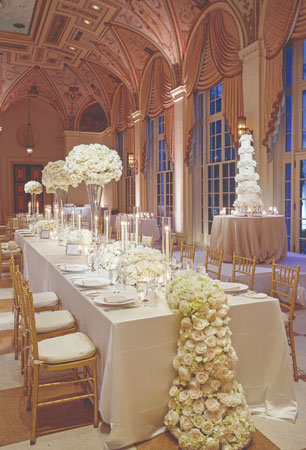 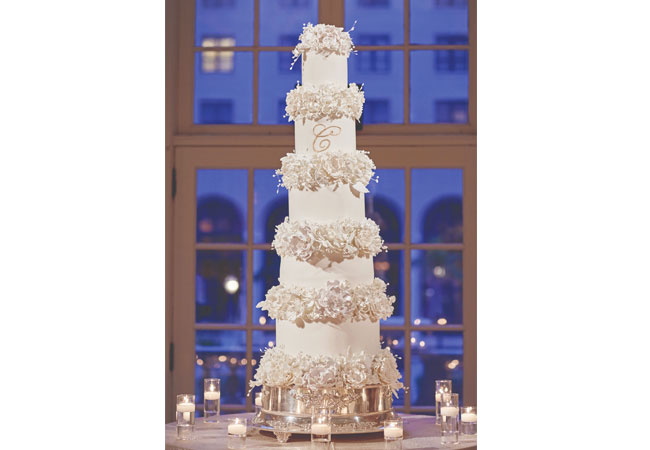 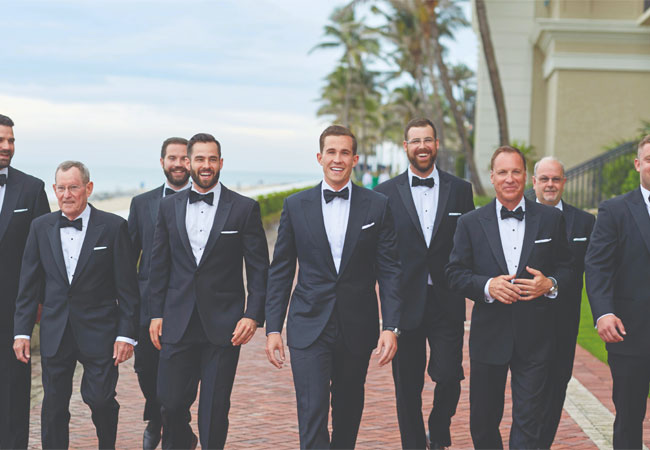 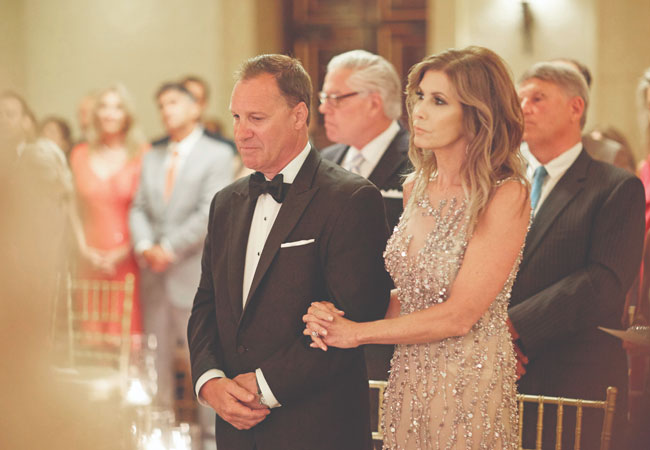 When an unexpected storm struck minutes before their wedding at the mythical Breakers Hotel, these high school sweethearts simply moved the magic indoors.

Their romance has an element of fate to it. While they ran in the same circles of friends for years, Christine Hall and Alex Cartwright had never bumped into each other. “I knew all of his friends and he knew all of mine, but somehow we never actually met,” says Christine. When they finally did, during senior year Spring Break, it was love at first sight.

“That was it,” she says. “We dated all through the summer and then we both went to UK and dated all four years.” When graduation came, Alex pursued a childhood dream of working at the legendary Breakers Hotel in Palm Beach. “His family had vacationed there for years,” says Christine. “It was always just a very meaningful place for him.” Eight months later, Christine got a job in real estate and moved down to Palm Beach too.

While they talked about marriage, they never set a specific timeline. “I always told him to just ask me when the it felt right,” says Christine. It felt right around Thanksgiving 2016. The couple were planning to attend a friendsgiving celebration. But Alex had a special pre-event plan. “He told me he wanted to take me to the Jupiter Beach Lighthouse for the sunset,” says Christine.
“I love sunsets and they have the most amazing view from the top. So, I honestly didn’t suspect anything.” Alex had arranged a private tour and when the moment was right and the sunset was glowing, he got down on one knee and proposed.

Their wedding planning was just as meticulous. Instead of hiring a planner, Christine and her mother planned the celebration over the next year and a half. “I owned a floral design business and Christine has exquisite taste and she wanted us to do this together,” says the bride’s mother, Valerie Hall. “It was a wonderful experience that we could share.” Christine agrees, “It honestly wasn’t stressful; it was actually fun. We have a best friend relationship and we enjoyed going back and forth.”

A visit to the Breakers by her parents confirmed what the couple had decided: that the Breakers would be the perfect place to hold a small wedding for their closest friends and family. “My dad took a walk out in the courtyard and said, ‘This is it,’” says Christine. “There was a long path that would be perfect for our walk. We wanted to get married in that beautiful Mediterranean Courtyard by the fountain where Alex had played during his childhood.” The couple agreed that bourbon  had to be part of their Palm Beach wedding:

“We wanted that Louisville flavor and we also wanted all of our guests to be up on their feet and dancing,” says Christine.

“We wound up choosing a fusion band that combines live music and a DJ. We really wanted to make sure that everyone of all age groups enjoyed themselves.”

When the perfectly planned day arrived, an imperfect weather forecast threatened to interfere. “The Breakers told us they would make the call on whether to move the wedding indoors four hours before. But I really wanted it for my dad. So I asked them to wait a little longer. We wound up making the call twenty minutes before the wedding. I had uneasy moment and then I pulled it together.”

She was completely composed when she and Alex shared a special moment together: “We had decided not to do a first look, but we planned a meeting where we held hands around a corner and talked right before the ceremony,” says Christine. “That was really cool for both of us. After that, we could both focus on being in the moment and enjoying the experience.”

Another favorite memory? “When the doors to the Gold Room opened and I saw Alex at the end of the aisle and saw this room filled with all the important people in our lives and it had this kind of golden glow… I wouldn’t have had that moment if it had all gone as planned.” In the end, the surprise setting of the Gold Room was the ideal place for their dream wedding. “It wasn’t what we expected, but it was everything we wanted,” says Christine. “We were surrounded by the people who mean the most to us and we were able to look around this beautiful room and see all of these people who were there for us having a wonderful time in this incredible setting. We were completely in the moment and we will have that memory forever.”

Groom’s Tuxedo:
Ermenegildo Zegna from Rodes for Him, Louisville