AN INSIDER'S GUIDE TO THE BREEDERS' CUP 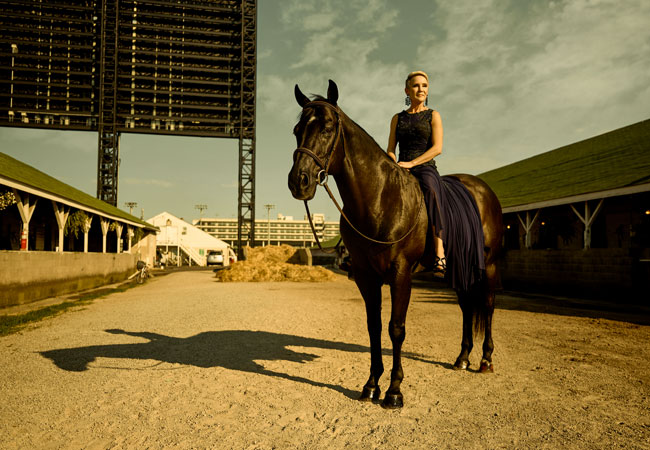 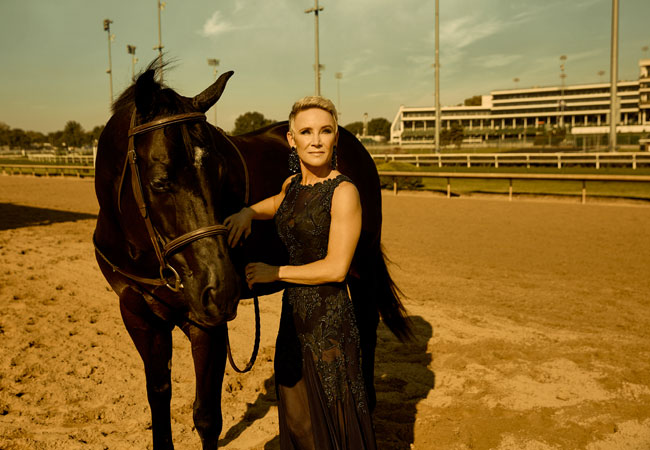 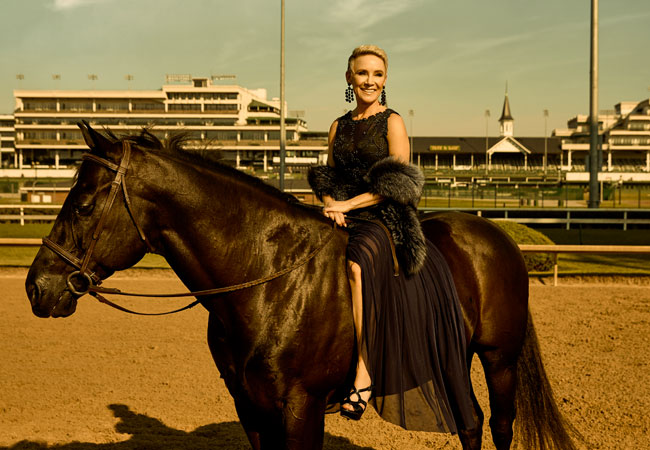 Our city is hosting another global horseracing event. Here’s everything you need to know before you go (or even if you don’t), from a woman who should know-- former jockey and NBC racing reporter Donna Barton Brothers.

Can you give us the short definition of The Breeders’ Cup?
It’s our year end championships in multiple divisions: fourteen different races, including  2-year-old fillies; 2-year-old fillies on the turf; 2-year-old colts; 2-year-old colts on the turf; female sprinters, male sprinters…. Fillies and mares are permitted to run against “the boys,” but colts and geldings cannot race in the filly and mare races. The Breeders’ Cup races offer a total of $30 million dollars in purse money, so it’s a big deal!

It’s worth noting that after about August of each year we don’t see many races that are specific to “3-year-olds” like the Kentucky Oaks (3-year-old fillies) and Kentucky Derby (3-year-old colts and geldings), so it’s often the first time we get to see this year’s 3-year-olds race with the older horses in their division. So the Breeders’ Cup Classic will have some of the horses  that we saw on the Triple Crown trail racing against older horses for the first time. Same with the Breeders’ Cup Distaff—3-year-old fillies will be running against older fillies and mares for the first time. It’s one of the things that makes these races exciting since now we’re comparing, not only horses from a specific generation but horses across generations.

One thing that is unique to this year’s Breeders’ Cup is the new format. Friday is being billed as “Future Stars Friday” because the five Breeders’ Cup races on Friday will only be two-year-olds. It’s a bit like being a huge basketball fan (college and NBA) and going to the Final Four. The best of the best are in the “freshman” division. And there’s a really good chance that you’ll see next year’s Kentucky Derby winner racing on Breeders’ Cup Friday.

You cover the races on horseback. What’s that like? And do you already have your horse picked out?
I honestly believe I have the best seat in the house. There’s no one crowding me out of my seat, that’s for sure, I get the best of both worlds in that I’m close enough to the crowd to feel their excitement and then on the track with the horses to assess their demeanor. Interviewing the winning rider right after the race—and on horseback—allows me to swoop in and talk to them before they’ve had a chance to move from what they’re feeling in their heart about the win to what they “think” about it. I care much more about what their heart is saying than what their head is saying, so I relish these post-race moments. And, yes, I have my horse picked out. When covering races at Churchill Downs, at least for the past 2-3 years, I always use trainer Ron Moquette’s stable horse, “Sherman” (short for Sherman tank). He actually belongs to Ron’s wife, Laura, and is such a good boy. He would run through fire for his rider. And he’s gorgeous too!

Can you compare Breeders’ Cup to Derby in terms of the race, horses and audience?
While the Kentucky Derby is an amazing horse race, it’s also one big party. So many people come to the Kentucky Derby knowing very little about horse racing. The Breeders’ Cup is more of an “event” than a party, especially since the Derby is one race and Breeders’ Cup races take place over the course of 2 days— with 5 Breeders’ Cup races on Friday and 9 on Saturday— and it has an international flair with many horses (mostly turf horses) coming from Ireland, France and the UK. With each race heavily influencing year-end championships for each division, these races carry a great deal of significance. Don’t get me wrong, it’s still a big party! But it’s two long days; for race goers it’s more of a marathon than a sprint.

Generally speaking the Breeders’ Cup audience is a bit more savvy about all of the races and horses and, due to the European presence of the horses, there will also be race-goers from all parts of Europe. The Breeders’ Cup audience is particularly clued in to the wagering opportunities unique to these big races. The Kentucky Derby can be a tough race to bet and make money on since you have young horses facing so many new challenges (biggest crowd they’ve ever seen, most challengers they’ve ever faced, longest distance they’ve ever run). With Breeders’ Cup you have good, consistent and proven horses doing something they’ve proven to be good at already and the betting pools are huge. Big bettors like this because they can place a $5,000 bet on a horse to win without seriously affecting that horse’s odds. On your average Wednesday at the track a $5,000 bet on a horse to win will move that horse from 7-1 in the wagering to 9-5 which makes that pay out a lot less attractive.

Do you have any favorite Breeders’ Cups moments or memories as a reporter?
The interviews after the Breeders’ Cup Classic races tend to be my favorite because those are the ones that mean the most to the jockeys and to the winning horse’s legacy. But, honestly, all of these races are game changers for the winner. They have either validated their already stellar accomplishments or just proven that, against all odds, they could beat the best horses of their respective divisions.

However, by the time the 2009 Breeders’ Cup races came around it was clear that there no fillies or mares in the nation who could beat her so her connections ran her in the Breeders’ Cup Classic where she faced male rivals for the first time. She won with a late surge that, at any other point in the race except the finish line, looked like it was not going to be enough. She came into the 2010 Breeders’ Cup Classic still undefeated and facing male rivals for the second time. In a thrilling stretch run that came down to a two horse race between her and a colt named Blame, Zenyatta’s bid fell a step short and she was handed her first defeat. However, in the hearts and minds of everyone who had watched her compete throughout her career, she was still perfect.

Do you have advice for first-timers looking for the best first Breeders’ Cup experience?
It’s definitely a big deal so it’s the perfect opportunity to don your favorite Fall fashions and go all out with your outfit! But my first piece of advice—just like Kentucky in the Spring, the first weekend in November can bring sunshine and bluebirds or snowflakes and frostbite— so buy 2 outfits (4 if you’re going both days) and keep the price tags on all of them until you see what the weather will bring. (God, I hope all the stores in town don’t hate me for suggesting this but note to the stores: We may decide to keep all 4 outfits!). If you’ll be seated outside, buy a really nice overcoat that you love and that makes a fashion statement. Conversely, if fashion is not your thing, no worries! Just like at the Derby, you’ll see people dressed in just about anything you can imagine.

Two, just like the Derby, it’s a long day, so come prepared with comfortable (enough) shoes. You all know the drill. This is the home of the Kentucky Derby! Three, when you’re betting know that there’s a term called “the smart money,” and it shows up in telling places on these big days. So if you see a horse that is 8-1 in the morning line and she’s been bet down to 4-1 there’s probably a good reason for that. Bet on her. Same if it’s the other way around. If a horse is 4-1 in the morning line and 10-1 on the tote board we say “he’s dead on the board” which means the smart money is steering clear. You should too. There are a lot of great wagering opportunities if you pay attention to where “the smart money” is.

What is Breeders’ like socially?
The Breeders’ Cup races really are the year-end championships, so if an owner has a horse in a Breeders’ Cup race they will not only go, they’ll likely bring a large group of family and/or friends with them. For them it’s both a social event and a race because it’s a long day to get to the one race. However, you’ll see more Europeans at Breeders’ Cup than Derby since there will be quite a few European horses competing. For the fans of horse racing it’s a smorgasbord of great racing, potentially lucrative betting opportunities, and a chance to see the best jockeys, winningest trainers and wealthiest owners gathered in one place. But even if you wouldn’t recognize a Hall of Fame jockey from an apprentice rider, you’ll still feel the buzz in the air. And the people-watching, just like on Derby, offers great entertainment value. There’s just something about the big days of racing that creates a stir throughout the entire crowd.

How do the changing locations affect the overall feeling and tone of the event?
Every racetrack has its own unique personality. In Louisville, we can compare it to a basketball game at the Yum! Center vs. Rupp Arena vs. Freedom Hall. Same sport, same goals, different venue, different feel. Belmont Park is a massive racetrack—both the track itself and the grandstand/clubhouse— so no matter how many people are there it still feels a bit cavernous. Plus, it’s cold in New York the first weekend of November. But even California’s two host tracks for the Breeders’ Cup are different. Santa Anita is big enough to handle the crowd— much like Churchill Downs— but not too big; while Del Mar is more like the size of Keeneland so everyone is shoulder to shoulder but still enjoying the day. Beyond size, I feel like people at the track for Breeders’ Cup—anywhere—come with a deep appreciation for the sport and the horse. Having said all that and having covered the Breeders’ Cup all over the United States, I can honestly say that the best racing fans are in Kentucky—whether it’s Keeneland or Churchill Downs. Our Kentucky racing fans just “get it.”

Is there typical Breeders’ attire for women or men?
Much like the Kentucky Derby, Breeders’ Cup is festive attire, but it’s in the fall so the weight and colors of the fabrics change and it’s a great time to bring out those fantastic Fall coats, boots and hats. Men still wear suits, but they lean toward wool or tweed rather than linen or cotton. The ladies still don beautiful hats and fascinators. Besides the weight of the fabrics, the only thing that changes, really, is that for ladies your overcoat may be part of your outfit rather than an afterthought.

How will the Churchill location affect the experience this year?
With Churchill Downs’ new parking and front entrance arrangement, there’s almost no way around having a relatively long walk coming and/or going so be sure to have comfortable shoes even if they’re just the ones you wear to walk to and from where you park. A tote bag comes in handy, just be sure to check size specifications on Churchill Downs’ website before you go. It’s also very likely to be a bit chilly so come prepared. Again, it’s a long day… so while it may be beautiful when you get to the track the temperature could drop 20 degrees when the sun sets. Aside from that, there is not a racetrack  in the United States that is better-suited to host a large crowd and a big racing event and there are no better racing fans than the ones in Kentucky! So just enjoy it—y’all know what to do!