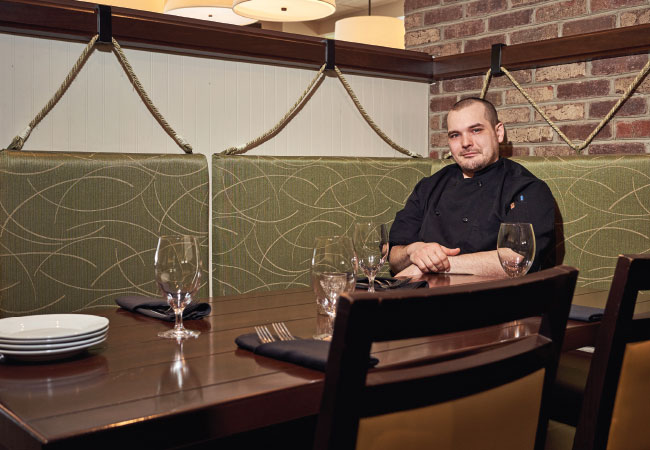 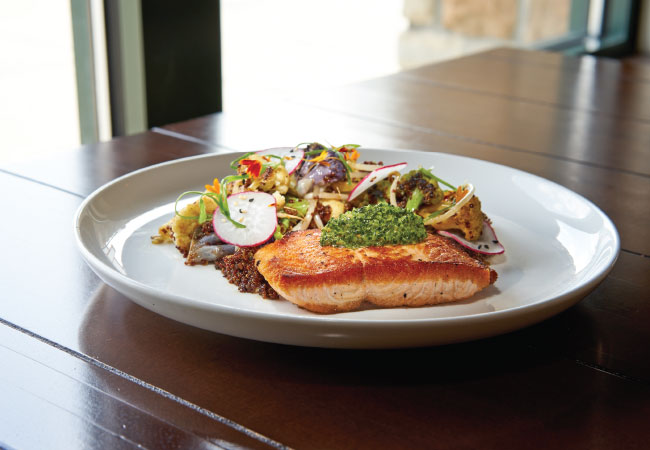 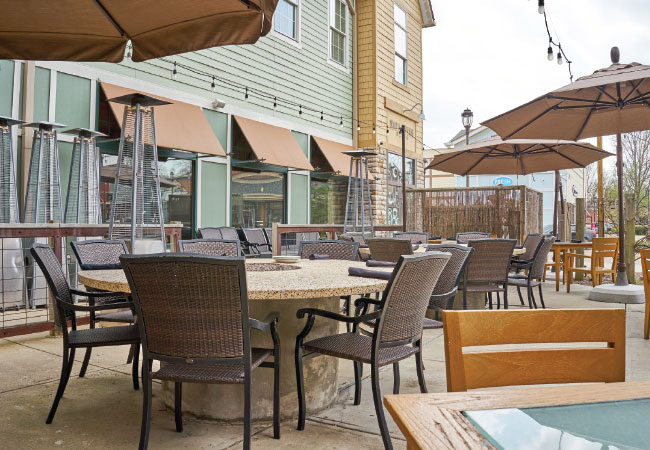 Their perfect patio and Louisville-meets-California cuisine makes Napa River Grill a hot spot for drinks, dinner and lingering meals by the fire tables. Nancy Miller pulls up a chair.

Napa River Grill is a restaurant where classics are reinvented just as much as they are respected. That’s because the person at the top of the culinary chain doesn’t want to get bored, nor does he want his guests to get in a rut and forgo an exciting adventure.

“There’s nothing wrong with classics, but I encourage people to try new things, even if I use a subtle approach. Subtlety can be delicious,” says Executive Chef Seth Butkus.

“The other chefs and I balance the tried and true with testing how much we can push a few changes. We’re not trendy… but we are focused on staying relevant.”

Tomato soup has been on the Napa menu since the restaurant opened and won’t be taken off because it has such a successful track record among diners. Caesar salad and cornbread occupy a similar place among long-tenured fare. It has made such an impression on guests that Butkus is used to hearing the comment, “Oh, you work at Napa? I love your cornbread.”

The menu at Napa River Grill is a collaboration among the chefs, Butkus’ own vision and a reflection of his eagerness to seek inspiration from wherever it surfaces. Some of that inspiration comes from his collection of more than 200 cookbooks that he considers guidelines rather than recipe books. He reads cookbooks like other people read novels. Books by Karen Page and Andrew Dornenburg are among his treasures. They supply him and Napa with a myriad of ideas he spins with his own twists. The Flavor Bible, which centers around flavor profiles and combining various ingredients, often kicks off his own adventure that takes side roads along the way.

Napa patrons eat up his spirit of innovation that has taken the form of dishes such as Verlasso salmon with cilantro chutney and blood orange soy, and a rotating steak that’s paired with a twice baked potato chock full of Cheddar cheese, brisket bacon and sour cream.

The menu is a testament to Butkus’s fondness for citrus and curries. Napa’s seared scallop dish resonates with levels of flavors of mango, cucumber, watermelon radish, lemongrass, ginger and green curry vinaigrette.  If you taste it and think something is left out of that litany of ingredients, you’d be correct. A bevy of spices complete it, but they’re a secret he’s keeping to himself.

Napa River Grill is lauded for its extensive wine selection, a factor that plays into Butkus’ menu planning. He tends to create dishes that pair with a group of wines rather than one particular wine.

He works with local purveyors and Kentucky Proud products as much as possible, relying on Kenny’s Farmhouse cheeses, Capriole Farms goat cheese, Black Hawk Farms for beef, lettuce from Groganica Farms and mushrooms from Frondosa Farms.

Napa’s vine-surrounded patio is one of the city’s best most welcoming venues for outdoor dining. The restaurant’s menu will undergo a partial redo to celebrate spring and summer crops and to be enjoyed outdoors as well as in the carefully curated design of the dining rooms.

“I think we spend all winter waiting for spring and summer to come back. I do as much as I can with locally grown mushrooms. I hit asparagus hard for a good month and a half and I like to get my hands on the first peas of the season. And ramps are beginning to pop up. I grill them for steaks and pickle them to use later in the year,” says Butkus. Although he likes to create some dishes on the fly, he’s ready to use strawberries and rhubarb in a barbecue sauce for pork shank.

He couldn’t be happier thinking about infusing his menu with the new seasons’ plethora of options. But his love for his job isn’t seasonal. “I’m having a great time. In the kitchen I get to listen to loud music and play with fire and knives. And I’m an adult who gets to play with food.”

The Inside Scoop with Seth Butkus

You’re surrounded by some of the finest wines in Louisville. Do you sip while you cook?

No. I frown on that for all the employees.

Restaurant kitchens are known for being zones of craziness. Does that describe your kitchen at Napa River Grill or is it laid back?

My idea of how a kitchen should run is without craziness. I’m not a chef who yells and screams; that’s not my philosophy. I don’t operate like a tyrant. I want a productive mentality in the kitchen.

What treat could you never pass up?

Donuts. I wake up at the crack of dawn to go to Nord’s or Plehn’s to get them.

What’s the best cooking advice you’ve ever been given?

Don’t be afraid to mess up. It’s how we all improve as cooks. I’ve probably made all the mistakes at some point. A couple of times I messed up a whole bunch of foie gras. That’s not something I talk about a lot but those were good lessons. The second piece of advice is to never stop trying to learn and to get better. If you’re going to cook, commit to getting better. When you cook the same stuff every day, you may think you don’t have anything to learn, but that’s not true.