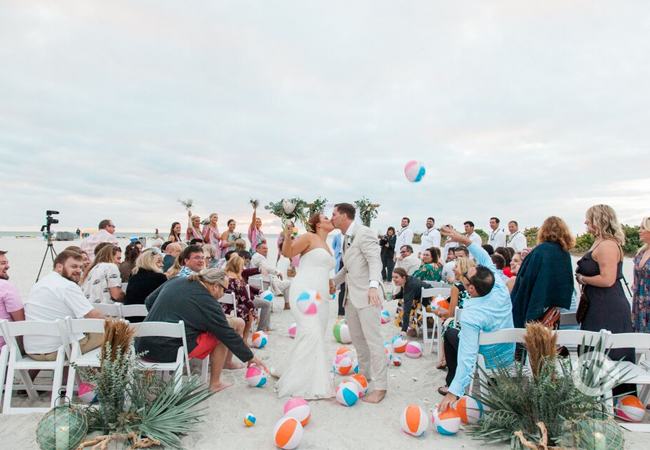 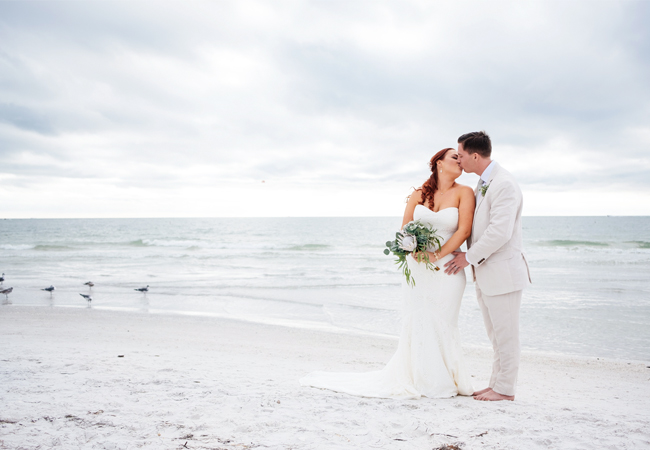 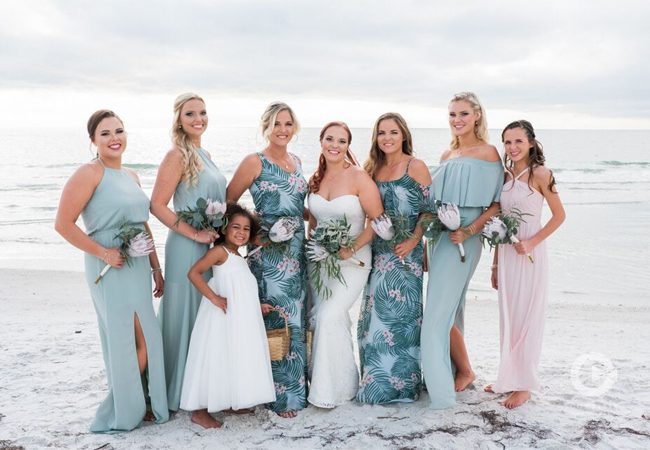 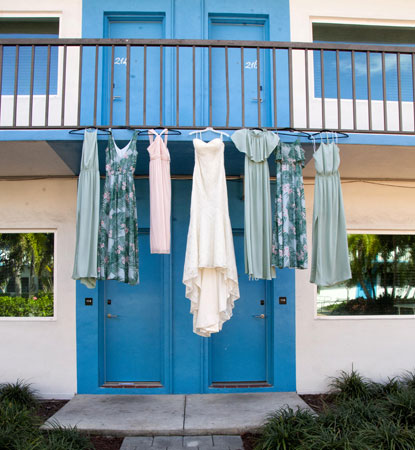 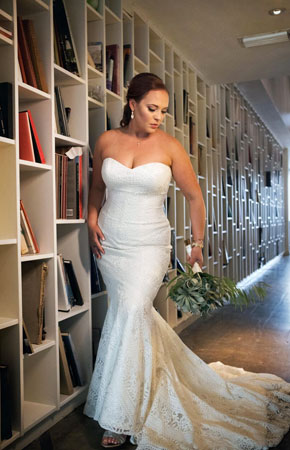 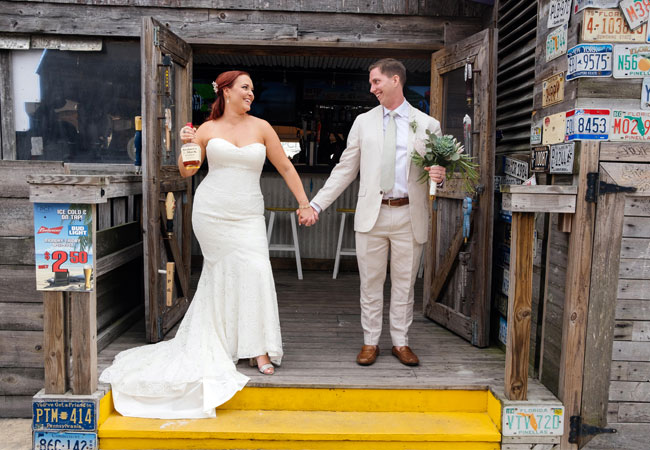 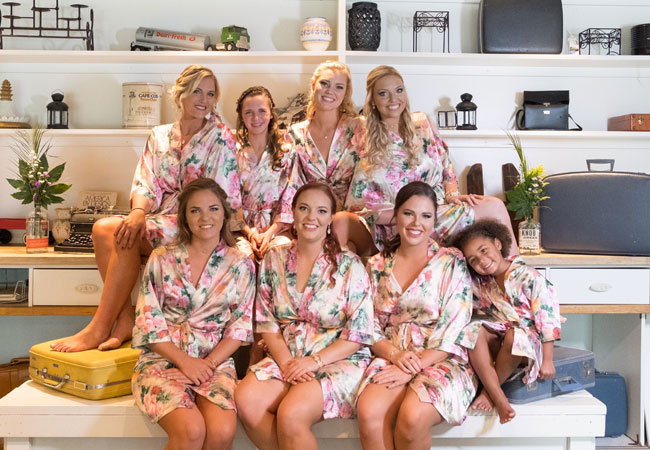 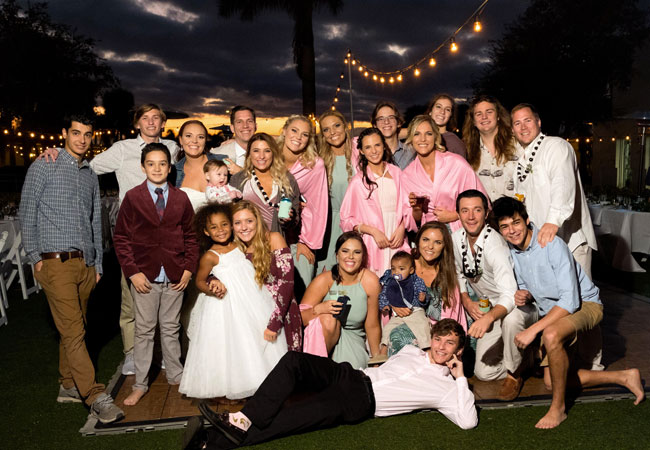 After meeting on a canoe trip, Katie Meinhart, owner of Six Sisters boutique in NuLu, and Sam Rouster planned a perfect, beach-chic destination wedding with guess how many bridesmaids.

They actually have an interesting answer to the age-old question, “How did you two meet?” “Sam and I met on a blind date, Ca-brewing with our Crossfit gym,” says Katie Meinhart, owner of Six Sisters, a funky women’s clothing boutique in NuLu. “I was new to the gym and they set us up in a canoe together for an entire day of drinking on the Blue River.” While life intervened and the two didn’t go on another date until September, once they did, “It was history,” she says.

The couple were inseparable for the next two years, until Sam entered grad school at Western Kentucky University in Fall 2015. “Then we so we started the long-distance thing,” says Katie. “It was a longgggg two years of back and forth to Bowling Green.”

About a year and a half in, Sam surprised Katie with a proposal! “I had just bought a house in the Highlands and we had all of our friends and family over for a housewarming party,” she says. “Sam was in his second and final year of grad school at WKU, so we’d been doing the long-distance thing for a good bit. Half way through the night he was making a toast and next thing I know he was down on one knee. I was so excited I literally grabbed the ring out of the box and put it on my finger myself.”

The couple planned to wait until Sam graduated to have the wedding. “Sam wanted a big party wedding, all our friends and family, and I wanted a court house wedding. Simple and zero stress,” says Katie. “I knew anything in Louisville with my family would have been a 500 plus person wedding. So, we met in the middle with a holiday beach wedding with just the closest of family and friends.”

They quickly settled on the idea of New Year’s Eve eve 2017 in St Petersburg, Florida—a year and a half long engagement. That gave them time for Katie to squeeze in the achievement of another dream: opening her own boutique. “After years of managing stores, I felt ready. The space in NuLu opened up and as soon as I saw it, I was all in,” she says.

“Some people would say it was crazy to plan a wedding and open a new business in the same year, but we’re both a little crazy.”

So, the two stripped floors, painted walls, ordered light fixtures all while planning their own relaxed wedding down to the last detail. “I literally did just about everything as far as the planning goes, so the wedding was very much ‘us’ in so many ways,” says Katie. “Our wedding favors were monogrammed wine glasses with pineapples, as well as koozies with pineapples on them. Growing up they were always on my parent’s front door as a welcoming, and they’ve stuck with me as the perfect welcoming gift.”

While they couple had a cake, they went small and added a dessert table. And they filled snack bags with their favorite sweets— including Starburst Jelly Beans, Twizzlers, Reese Cups, macaroons and Buckeyes (Katie’s favorite treat to bring Sam). “Overall, we broke most of the traditions,” she says. “No garter or fancy bouquet toss, we kept it simple and real, much like us.”

Their rehearsal dinner set the laid-back tone with a taco bar and smores on the beach. “In terms of my rehearsal dress, I went above and beyond, but it’s what I felt good in, so of course I wore it! People literally told me I could have gotten in my rehearsal dinner dress, and it is almost as pretty as my actual wedding dress,” says Katie.

What did this fashionista choose to wear for The Big Day? “So, I ended up with the very last dress I put on at Couture Closet,” she says. “They say you never go with what you thought you would want, and it was so very true. I tried on all these flowy beachy style dresses, and none of them were me. My mom and closest sister, Ashley, picked out a dress one of the mannequins and I didn’t think I would like it. But, I put it on and it was perfect. I’ve always tried to embrace my curves and be confident in who I am, and this dress definitely embraced the curves! The lace detailing on it was so beautiful and bohemian, yet the fit was tight and just hugged in all the right places. I knew it was something Sam wouldn’t expect, since I rarely wear tight clothes, but I felt sexy and beautiful in it from the start.”

The day of the wedding went really smoothly. The only glitch? The caterers had forgotten to prepare gluten free items for Sam’s sisters who have Celiac’s disease. “But we had a great wedding planner for the day of, and she handled everything perfectly for us,” says Katie. “We definitely got to be selfish and enjoy our wedding thanks to her.”

As for their favorite moments? “Definitely the beach balls being tossed around, and at us, as we walked back down the aisle together,” says Katie. “And my sister’s reception toast could have made it on the Ellen show!” Naturally, the evening also included one standout, over-the-top sister moment: “Heather and Ashley, my two oldest sisters were my maid and matron of honor and they are terrible at sappy speeches,” says Katie. “Instead, they created a rap song for Sam and I, and then all five sisters and my two nieces broke out into this awesome choreographed dance. It was epic! I was bummed I missed out on all the sister planning it took to pull it off!”

Bridesmaid’s attire: Show Me Your MuMu