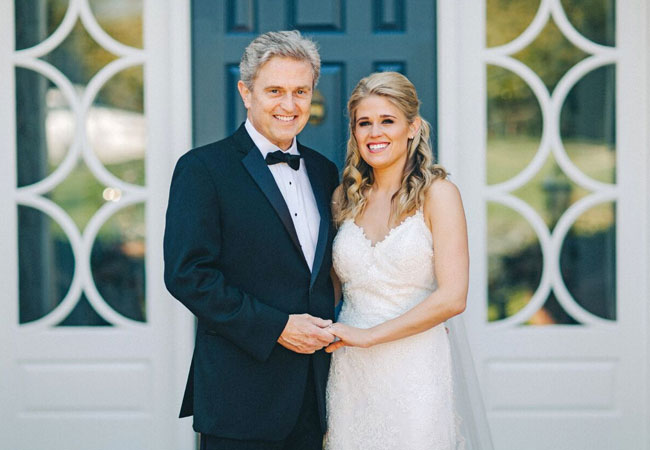 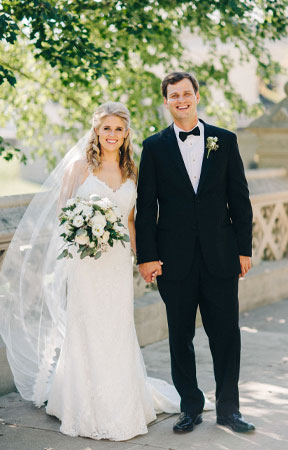 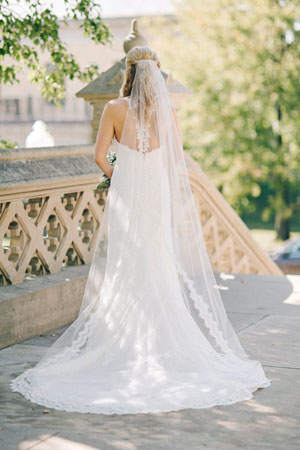 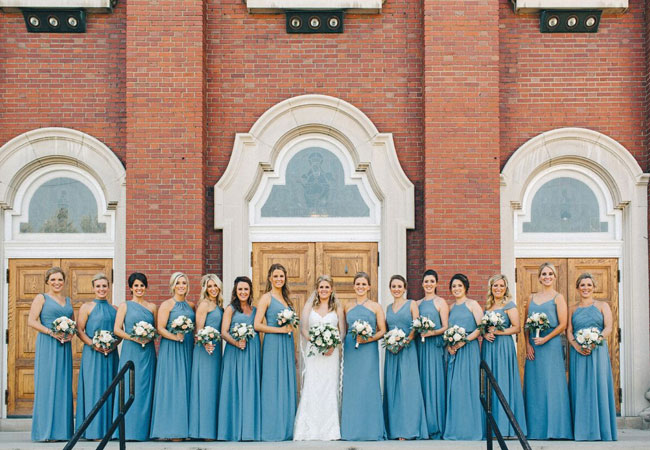 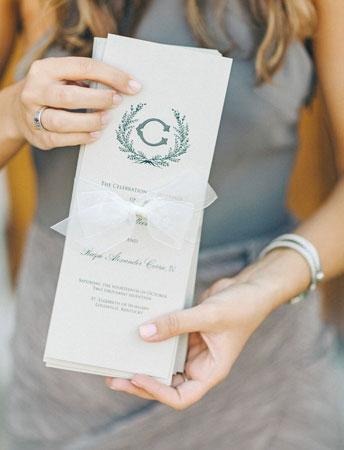 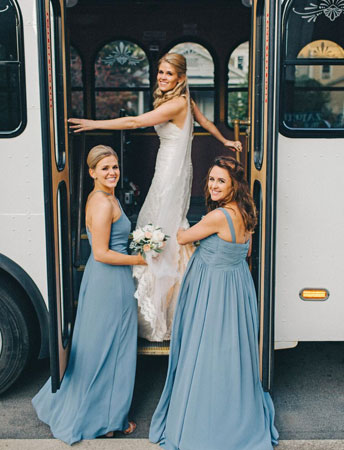 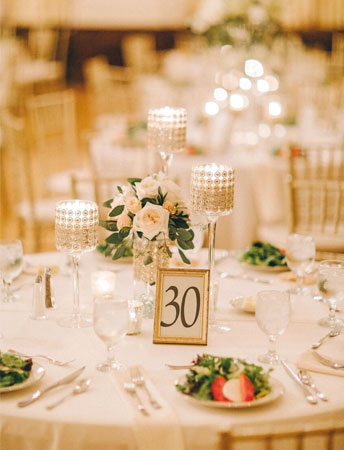 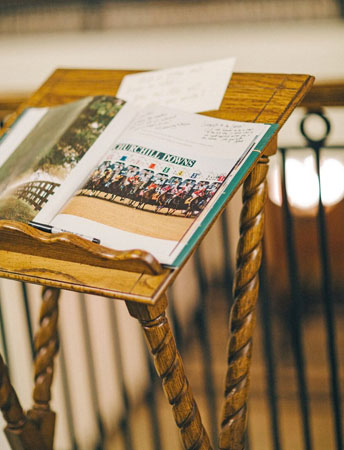 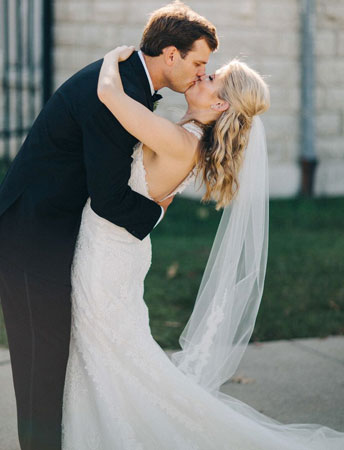 After a remarkably successful blind date at, yes, Gerstle’s, Kari Quill and Alex Currie embarked on a whirlwind courtship that culminated in a fairytale Fall wedding.

While their formal Fall wedding was flawless down to the cascade of white and blush roses on the four-tiered wedding cake, Kari and Alex Currie’s first meeting was decidedly down-to-earth: “Do you want to know that we met at Gerstle’s?” laughs Kari. “Our friends set us up and we met the night of Derby. The very next weekend, he visited me in Nashville for Steeplechase. Our friends did well!”

And they lived happily ever after… that is, after two years of long-distance dating, while she lived in Nashville and he lived in Lexington. “We took turns visiting each other or we met in Louisville,” she says. “But, about six months in, we started talking about moving back to Louisville when we could.” Once she relocated with her job at Alpha Orthopedic and he was able to move while keeping his job with Lexington-based MAP, they started talking about settling down in their hometown. “We never went ring shopping, but we both knew we were on that path,” she says.

While they didn’t go ring shopping, the pair did go house hunting and wound up buying a house together in November of 2016. Their new home was the setting for his surprise— an appropriately unfussy, but carefully-planned proposal. “It was the night before Thanksgiving. He was coming in town from Lexington and he knew I’d want to show the house to my sisters. He arranged with the current owners, who were still living in it, to let us drop by,” she says. “I had no idea he would propose to me while we were there. He took me out on the little back porch. It was raining. And he got out the ring. Then we went home to my parents’ house and all of our family and friends were waiting for us.”

If the settings for their first meeting and proposal weren’t over-the-top romantic, the venues for the wedding and reception would be. “We are both Catholic and knew we wanted to be married in a church,” she says. She also knew they wanted to be married the next fall. With their own parishes booked, they managed to get an October weekend at Elizabeth of Hungary downtown. “It’s really, really pretty and has that ornate, Old World feel,” says Kari. “And they were wonderful to work with. They organized the trumpet, the cantor and organist for us.”

Kari had always wanted an outdoor reception, “but my mom put the kibosh on that!” she says. “We knew we wanted it close to the church and decided on the Henry Clay. A lot of our guests were living out of town and the Henry Clay was new to them. I also like that it’s such a pretty space on its own. We had a planner, Debbie Saag of Wedding Warrior, but I’m not creative and I liked that the space was pretty in and of itself.”

Kari turned a lot of the planning over to Debbie, but she had her priorities in order:

“I cared about three things: the church, venue and band,” she says.

“We booked  14 Karat Gold out of Atlanta. They’re a traditional Motown band and that was important to me. The Henry Clay has a huge dance floor and we were going to use it!” Alex, on the other hand, cared about the cake. “He has a sweet tooth; I don’t,” she says. “In fact, I wanted to do pizza in lieu of cake, but that didn’t happen.” Alex accompanied Kari and her mom on the cake tasting and, together, the couple selected four layers. “I liked the idea of having different flavors,” she says.

She also liked the idea of a big wedding party: “I didn’t want to leave anyone out,” she says. “I had two sisters and so does he. Then I had my friends from Holy Spirit, Assumption and University of Georgia. I decided I’d rather go big than regret not asking someone.” The entire group got involved in different stages of the planning—coming in town when they could for fittings, showers and parties. “It was a year of really great parties,” she laughs.

Her favorite part of the day? “I loved our ceremony,” she says. “We had Father Mark Spalding (of Holy Trinity) before he was named Bishop of Nashville. I think we were the last wedding outside of Holy Trinity parish that he did. And we also had a sparkler exit that was a fun ending. It was interesting just to see who was still there and celebrating.”

Her advice for other brides and couples about to make this leap? “Don’t make it just about the wedding day, but about all of the celebrations leading up to it” she says. “People always talk about how crazy it is to spend so much money on one day. But it’s more than that. It’s a year of planning and memories. There are different stages of it that involve different people in your life. It was my mom’s little project. It was an excuse to get together with friends. It was a year full of memories that led up to one incredible one.”