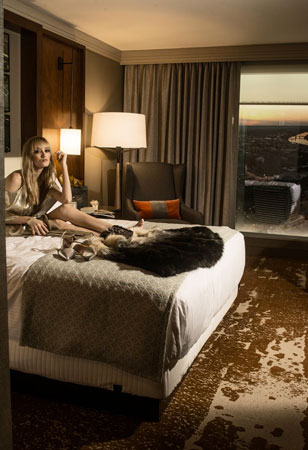 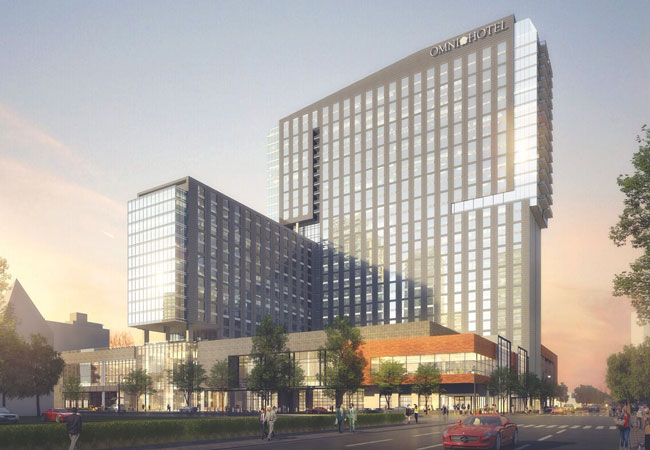 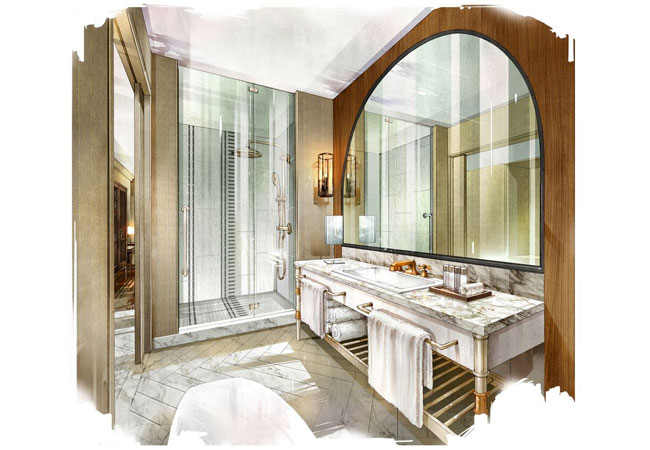 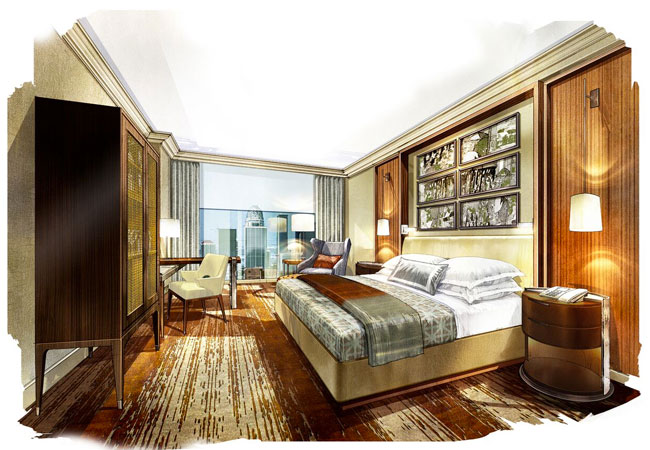 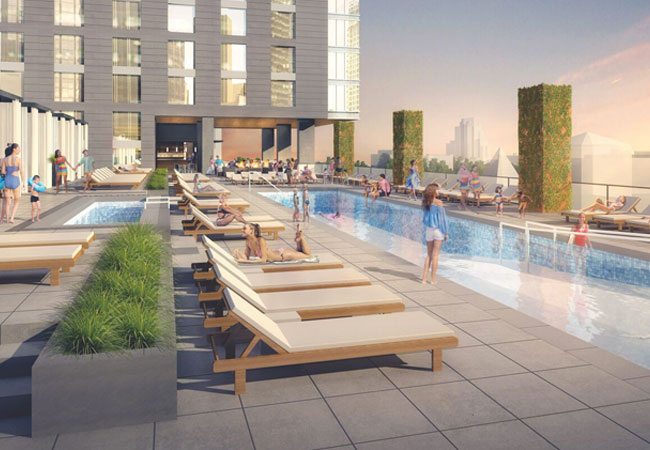 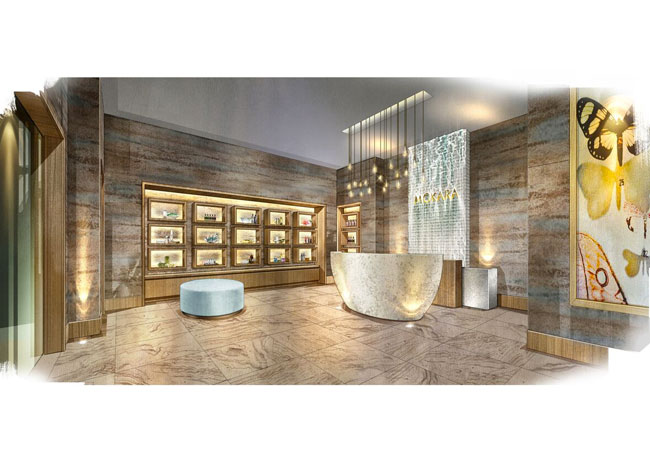 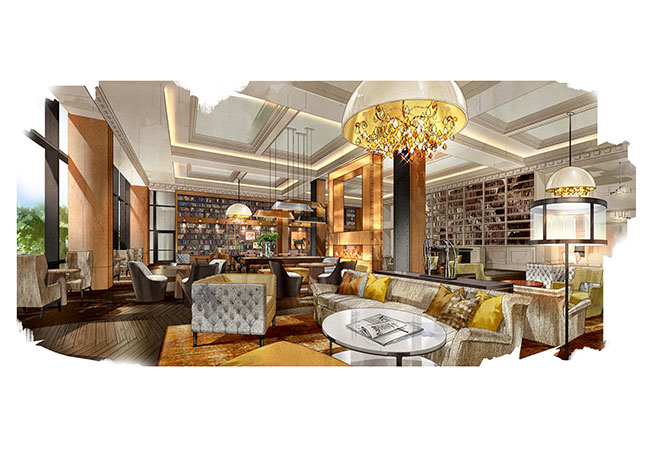 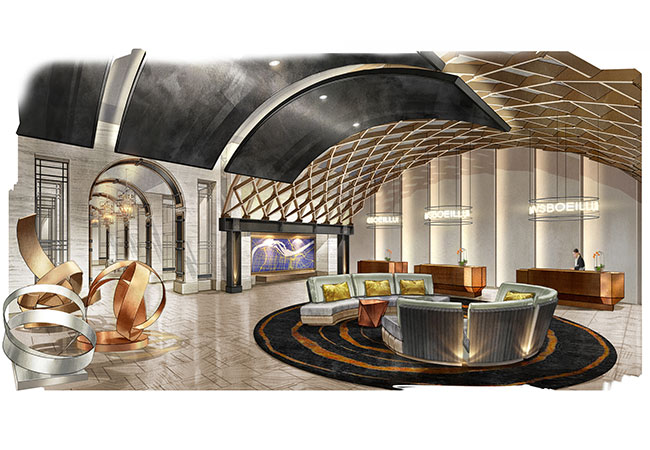 The new Omni Louisville Hotel soars 30 floors into the air, carrying with it the escalating expectations of a downtown boom in Louisville.

Martha McCoy, owner of Ah, Whatta Bout Mimi? – the flowers/candy/fruit basket boutique on Seventh and Market streets – looks around at the growth of downtown Louisville and dreams of one thing: a national balloon convention.

Brittney Gorter of the Derby Museum imagines buses full of people rumbling out of downtown Louisville and over to Churchill Downs.

Mary Henry, owner of Louisville Quest – the company that offers interactive downtown puzzles and scavenger hunts – hopes for a social media buzz for a booming downtown Louisville, culminating in more interest, activity and growth coming to the city.

The engine that is sparking these desires and expectations is the new Omni Louisville Hotel, about to land  downtown with the magnetic force of a huge nuclear reactor. And, like a nuclear reactor, it is expected to generate a release of energy around the city that most local people agree we’re ready for.

There’s no question that downtown Louisville has been itching to break out as a big-time urban environment; one that will attract convention business, tourist business, people on the sidewalks in the evening and on weekends, businesses relocating to downtown office buildings from the suburbs or other cities, and Louisvillians flocking to fill downtown restaurants  and residences.

Many believe the key to this will be the Omni opening in March on a square block of downtown real estate between Second and Third streets, Liberty Street and Muhammad Ali Boulevard.

The thirty-story building is the first new downtown skyscraper since the Aegon Tower opened at 400 W. Market St. in 1993.

“It’s the biggest game-changer to hit the city since the Marriott opened in 2007,” says Stacey Yates, vice president of marketing for the Louisville Convention & Visitors Bureau, who knows a bit about what it takes to bring attention to the city. “Having a property with 612 rooms goes a long way toward positioning Louisville as a town with the larger room blocks most conventions are looking for.”

But this isn’t just any 612-room hotel. It’s a major national brand that has invested $160 million to make this a world-class property with a distinct Louisville flair, with design references to bourbon, horseracing, cast iron architecture, the bridges – even to Thomas Edison, who spent a year living in Butchertown and working for Western Union before he caused a workplace accident in 1867 and was fired. (Twelve years later, he developed the incandescent lightbulb; 16 years later, his invention was featured in Louisville’s huge Southern Exposition.)

“They didn’t just come in and slap a blueprint hotel down,” says Alison Brotzge-Elder of Greater Louisville Inc. “They came in wanting to engage with the community, to find out what the things are that make Louisville special and put those touches in the hotel, so you’ll have an authentic experience.”

The hotel will have the dining and drinking options one would expect from a world-class hotel: a fine steakhouse, a three-meals-a-day lobby-level restaurant, a cozy Library Bar, a specialty bourbon retail store, and a 1920s Prohibition-period Speakeasy bar with four bowling lanes. (Why a bowling alley? “Because bowling was a very popular activity in Louisville in the 1920s,” says Eamon O’Brien, the hotel’s director of marketing.)

The coffee shop in the lobby will be a Heine Bros. because, says O’Brien, the emphasis will be on locally-loved brands whenever possible. There will also be a permanent art gallery featuring the work of local artists. And the specialty bourbon store will be called Lewis + Louis, two references to Louisville’s past: the noted explorer who teamed with Kentuckian William Clark; and the king of France who gave the city his name.

Perhaps more significantly, there will be a luxury spa that will be open to non-hotel guests, who will also gain access to the Omni’s deluxe hotel pool deck for the day; and a 20,000-square-foot grocery store, with everyday staples and a food hall full of prepared meal stations (sushi, barbecue, rotisserie chicken, breakfast sandwiches and crepes- many offered  by local establishments such as Gilberto’s Gelato) and a bar serving fifty locally-crafted beers.

Downtown Louisville has not had viable food retail in a long while, and Omni has made the smart decision to offer free short-term parking for locals who want to run into the store and grab a few essentials, or a prepared meal, on their way home.

The spa will give Louisvillians another reason to come downtown and engage with the city, become more comfortable with the urban lifestyle, familiarize themselves with the city’s attractions and come to see downtown Louisville as a place where they’d like to spend time and, perhaps, take up residence.

These amenities are important to the city’s ongoing development as a residential center. To drive that point home, Omni has topped off its project with 15 floors of 225 high-end one-and-two-bedroom rental apartments, including two penthouse suites with amazing views. Rents have not yet been announced, but O’Brien’s assumption is that they’ll start at “top of the market” levels and rise from there, like the building itself.

The innermost ripple of Omni’s impact on Louisville will begin with convention business. Five months after The Louisville Omni Hotel opens, the Kentucky International Convention Center will reopen, larger and more state-of-the-art, after a two-year, $200 million renovation.

“One of our major issues has been the size of our convention center, from the standpoint of bringing in higher-end conventions,” says developer Bill Weyland, who has spent his career focusing on making downtown Louisville a better, more competitive place. “Higher-end conventions bring more spending power into the area, which will help the stores, restaurants and everyone else. But to attract that kind of convention, you have to have a higher-end convention venue, and a convention hotel with all the bells and whistles.”

The Omni has the bells and whistles, and also the 612 sleeping rooms. That doesn’t serve the potential convention business all by itself. It’s not even the largest of Louisville’s downtown hotels. (The Galt House has 1,300 rooms; the Marriott, 616.)

But, says Weyland, the Omni’s mere presence will force the other downtown hotels to renovate and upgrade. And it will lead to more hotel construction projects. Already, according to a Cushman & Wakefield|Commercial Kentucky report, there are two other downtown hotels currently under construction: an AC Hotel by Marriott at 725 E. Market Street; and a Homewood Suites on Market and Seventh. And there are five more in the planning and development stage, including a Canopy by Hilton on South Fourth Street and the brother-and-sister projects being developed by Steve Poe at First and Main – the Hotel Distill and The Moxy.

Brotzge-Elder of GLI also expects that the mere presence of the Omni brand in Louisville will force outside developers to give the city a second look. “Already, there are a number of new apartment and condominium developments,” she says. “A lot of money from outside our region is now looking to Louisville as a place to invest and grow – real estate, construction, business start-ups and relocations. They feel Omni must have seen something to commit to a $160 million investment.”

And the ripples just go from there. “What we’re seeing in the center of city is activity that is creating a tremendous amount of jobs,” says Weyland. “We’re booming in hospitality jobs and, as our downtown has developed, it has become more appealing for corporate and tech-related jobs.”

“Our next piece is to create a sort of transit that allows these inner-city neighborhoods to become accessible to all these new job-owners, so they can live right at the edge of the downtown in areas that are a little more economical, with a little more of residential scale. “Because,” he notes, “so many of these jobs – in healthcare, in hospitality – are early-morning jobs. People are getting into work or out of work at 3-4-5 in the morning, and they don’t want a long commute, they want to walk out and jump on a bus, be at home or at work in five minutes. That’s my dream.”

It’s a time to dream in Louisville. Big dreams. Even a balloon convention is not out of reach.<