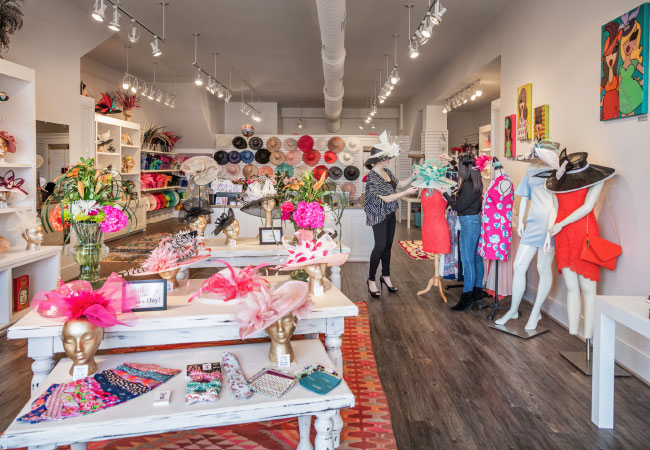 For some in our city, like The Hat Girls, Kate Smith and Rachel Bell, Derby season starts now. We checked in at their chic millinery boutique in Norton Commons, where they’re hard at work whipping up creations for flawless Derby-day ensembles and for the Kentucky Derby Festival Fashion show, which TOPS is sponsoring for the first time.

If you step into their light-filled space in Norton Commons, you might think Derby was right around the corner. But for in-demand milliners, Kate Smith and Rachel Bell, the fun started last June. “January is traditionally when we begin building inventory,” says Kate. “But now that we opened a shop and had such demand last year with Von Maur, Rodeo Drive and the Kentucky Derby Festival Fashion Show, we really never stop.”

The energetic design duo has set a goal of creating nine hundred hats by the month of April. “The most we’ve ever made is three hundred,” she laughs. Somehow, in the middle of the creative frenzy that comes with outfitting a city for a global event and creating as many as six dozen jaw-dropping headpieces for the Kentucky Derby Festival Fashion Show on Thursday, March 29, the pair also hopes to find the time to do more in-store events. “We’ve talked about doing something with wine and hats and maybe even offering classes,” she says. Of course, they’ll always make time for individual appointments whether it’s for custom-designed hats or to browse their ready-made confections. If you do pop in, you can pick up a hat box. This year, they’ve ordered beautiful boxes in every size, both for newly purchased hats or for individual purchase. And you don’t have to be a super-successful milliner to know that it’s almost harder to find a good hat box than it is to find the right hat.

The HAT GIRLS boutique is located at 10708 Meeting Street in Norton Commons. Call 502-619-3460 or go to thehatgirls.com or facebook.com/thehatgirls for more info.

See The Hat Girls stunning hats and fascinators along with over 150 looks from local boutiques at the year’s biggest fashion show. The Kentucky Derby Festival Fashion Show takes place on Thursday, March, 29, at The Horseshoe Casino. Go to kdf.org for tickets and info. TOPS editor, Christine Fellingham is producing and TOPS photographers will be on site snapping away. The show sells out early every year, so act fast!