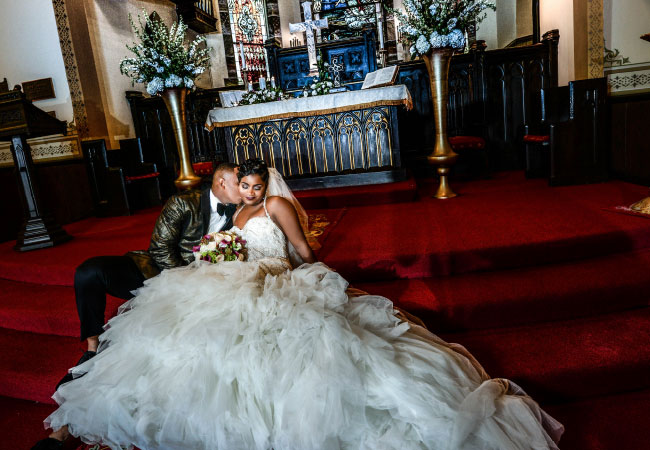 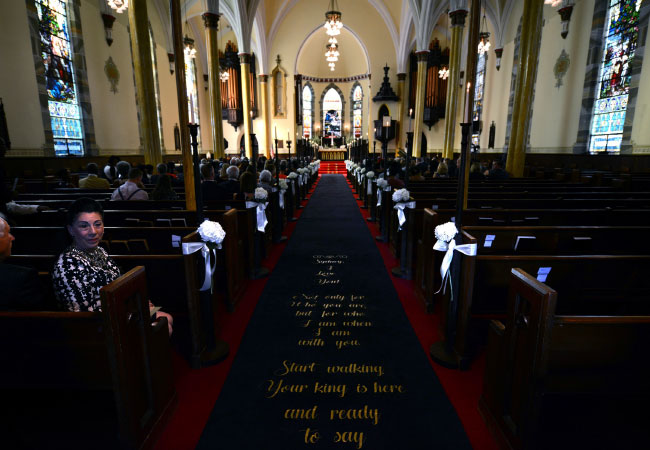 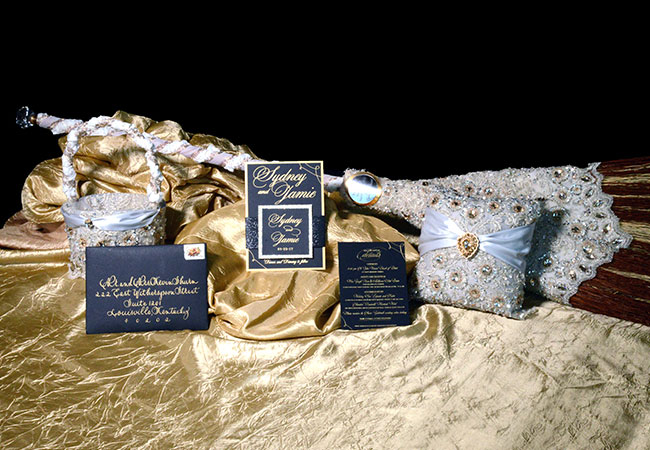 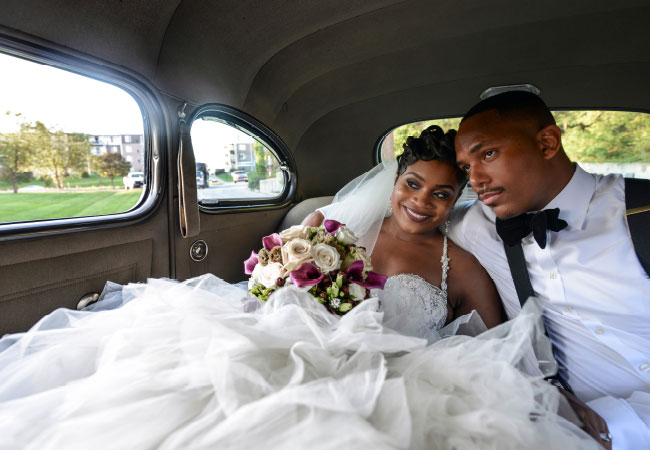 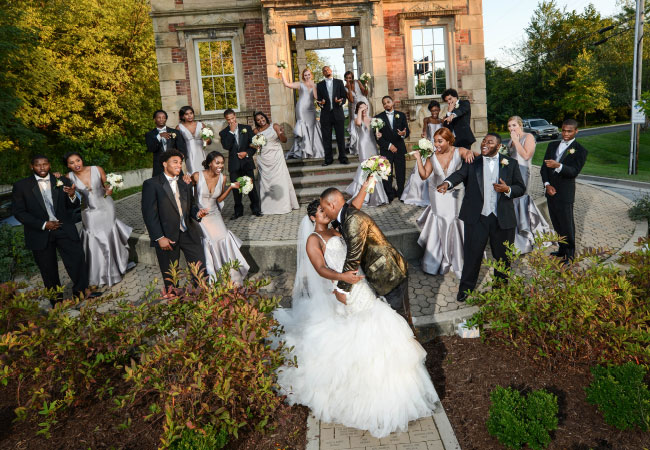 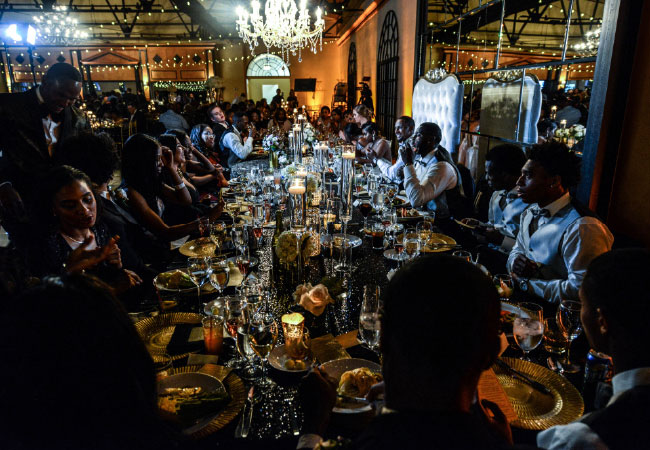 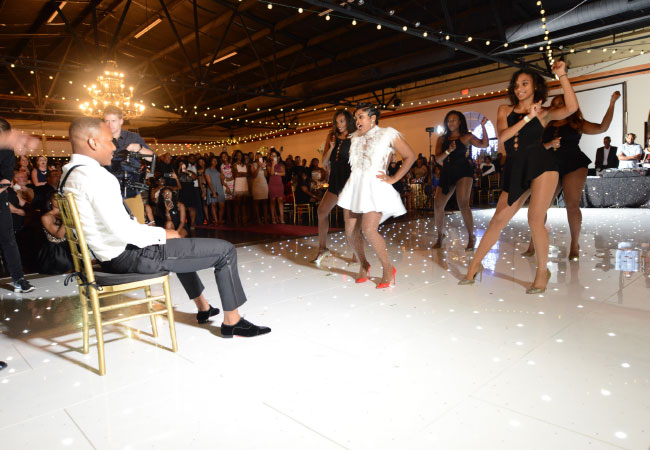 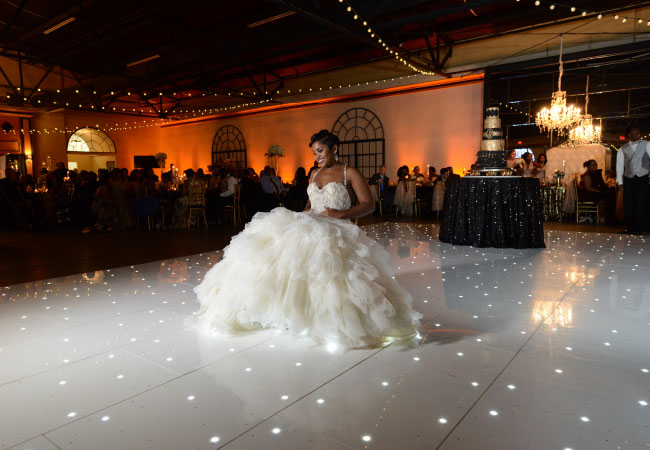 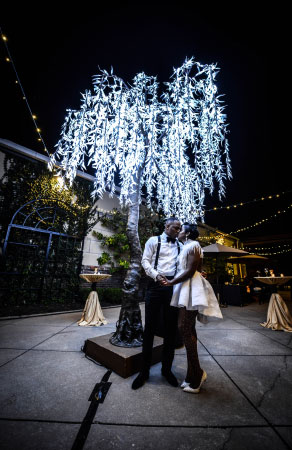 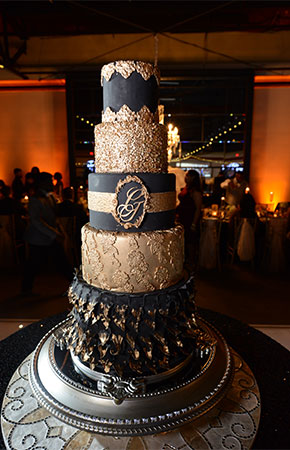 College sweethearts Sydney and Jamie Goldsmith orchestrated an elegant and unforgettable wedding celebration that started at St. John United Church of Christ and ended at an enchanted courtyard at Mellwood Arts Complex many magical hours later.

When Jamie Goldsmith proposed to Sydney Shurn on the day of her University of Louisville graduation, he set the wedding celebration bar high. He chose that already emotional day so they could celebrate with friends and family and maybe so that he could have a little extra help in executing his elaborate plan. “He had props, flowers, cards… he was over the top,” says mother of the bride Ivvy Shurn. “Her father (Kevin Shurn,  President and Owner of Superior Maintenance Co.) and I knew the proposal was coming, but Sydney didn’t.”

Since Jamie was trying to spell out “Will you marry me” on the pool deck below her parents’ Waterfront Park Place balcony, the popping of the question kept being delayed. “Jamie and I were both running around getting props; he kept thinking of just one more thing,” says Ivvy. “He’s a little bit of a perfectionist and Sydney is too. He wanted it to be everything she dreamed of.” When he finally proposed later that evening, there was an immediate yes. “Everyone there knew this wedding was going to be an event,” says Ivvy.

Sydney, meanwhile, just knew that it was going to be in the fall. “Fall is my favorite season and I’d always dreamed of a fall wedding.” She also wanted a downtown wedding where friends and family could let loose and have a great time. She had visions of an old gothic church and fell in love with St. John United Church of Christ: “It is just gorgeous and they were wonderful to work with.” A custom runner (with the words “Sydney, I love you! Not only for who you are, but for who I am when I am with you. Start walking. Your king is here and ready to say I do.”) ordered by her groom was a surprise romantic touch that she didn’t see until she set foot on it. “That was an amazing moment for me,” she says. The ceremony was full of meaningful touches— the flower girl’s dress was designed and made by Sydney, the couple jumped the broom, guests signed their names on puzzle pieces from a puzzle of the couple’s entwined hands. “We kept adding details,” confesses Ivvy.

The couple traveled to the reception in a 1938 Chrysler Imperial limousine—another surprise from the bride’s parents—to their reception at Mellwood Arts Complex. “I settled on Mellwood early because they were downtown and they were one of the few places that could accommodate our guest list of almost 500 people,” says Sydney. “They also have exposed brick and polished concrete and I wanted a rustic glam wedding. I loved that it was a blank canvas where we could bring in anything we wanted.”

Anything she wanted included an “enchanted courtyard” outside with shimmering cocktail tables and illuminated trees.

“Jamie and I are living in New York and we both love cocktail lounges where you can just kind of chill,” says Sydney. “We wanted to have that for our guests.”

“Jamie and I are living in New York and we both love cocktail lounges where you can just kind of chill,” says Sydney. “We wanted to have that for our guests.” They also had an illuminated dance floor, thousands of strung lights both inside and out, an elaborate seated dinner and a Louisville cream cart with custom-made Smoked  Pecan ice cream with Woodford Reserve Doubled Oaked since the  groom works for Brown Forman. “We also had a Brown Forman bar and Cellar Door bourbon balls with Old Forester 100 proof,” says Sydney. “Jamie was adament that any spirits were Brown Forman.”

Adding to the glamour of the day was the bride’s second dress which she changed into after the bouquet toss. It was custom made by a New York designer under Sydney’s guidance. (The bride is a fashion student at Parson’s School of Design.) A few of her friends and maid-of-honor joined her in making a wardrobe change to perform a choreographed dance for the groom. “That was one of my favorite parts,” says Sydney. “It was just an incredible memory with my friends and I can’t imagine a better group of girls to have planned that with.” When the wedding finished in the early hours of the morning, the couple truly felt they had marked this momentous occasion in exactly the way they had hoped. “What made it so special for us is that everyone was there…. And I mean everyone,” laughs Sydney. “We feel so blessed that we were able to share this moment with so many people we love.