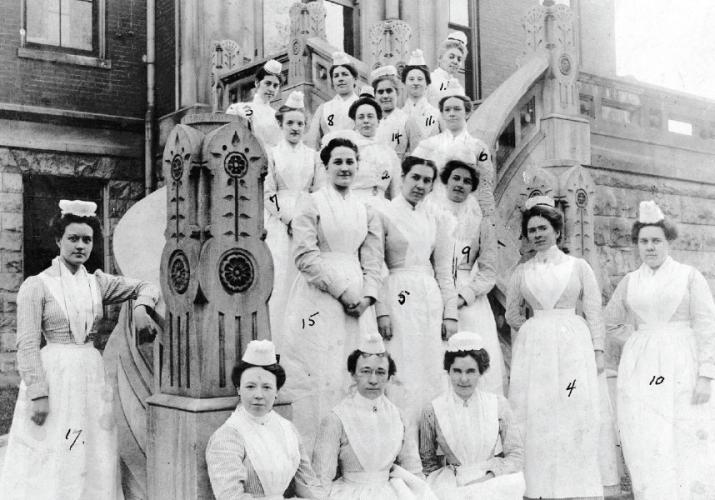 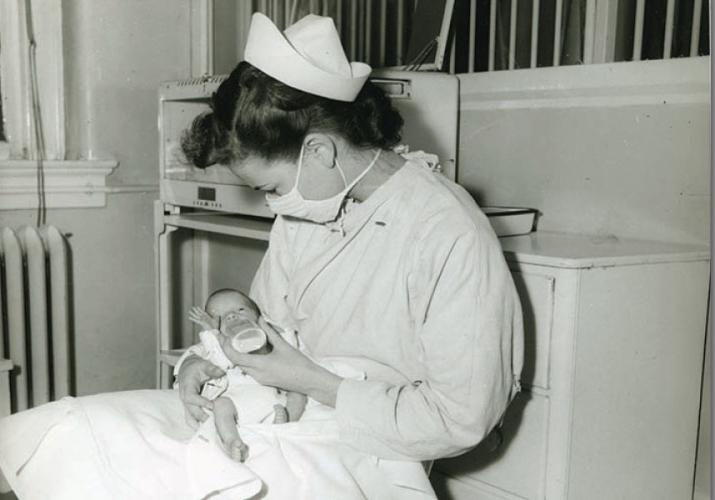 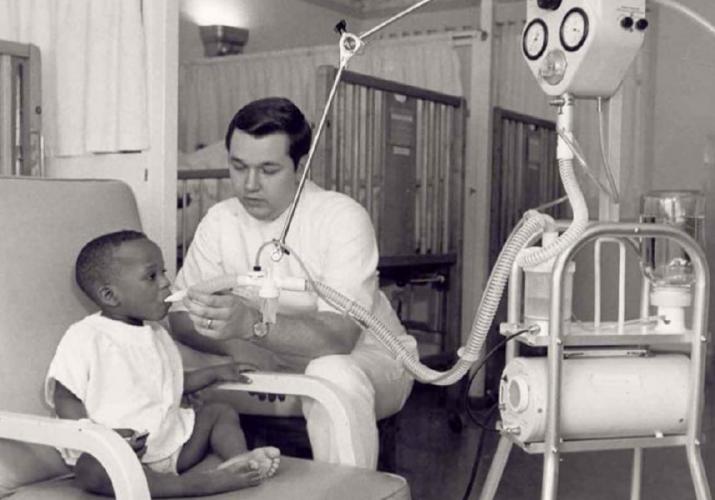 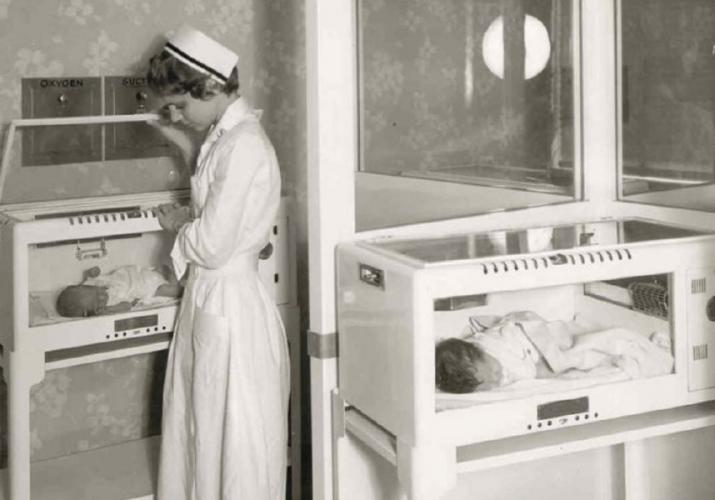 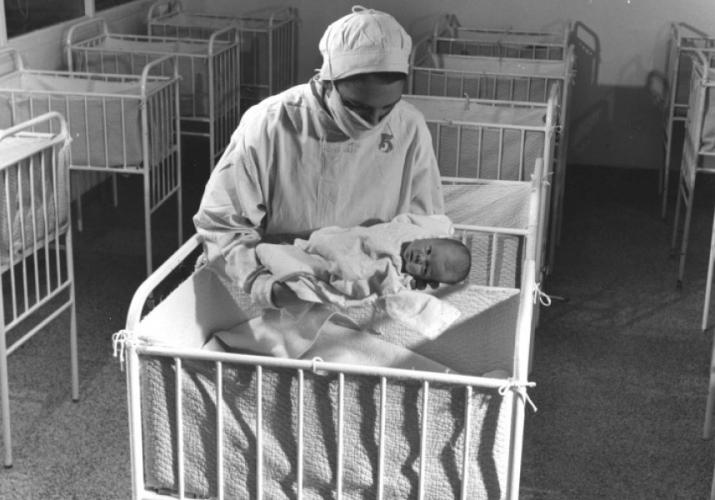 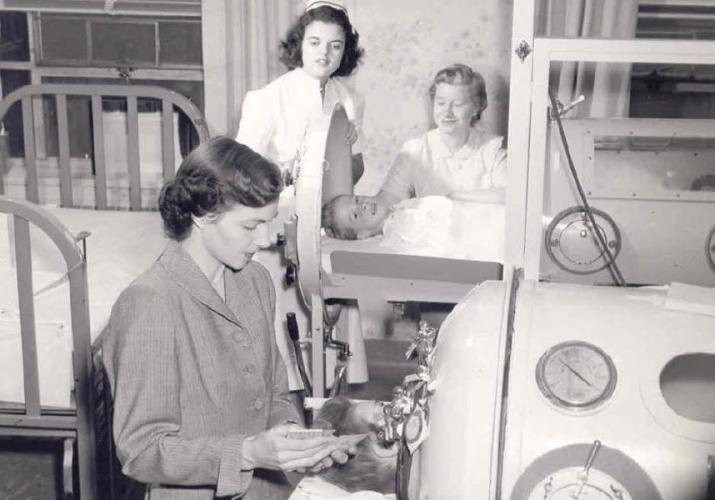 The history of Norton Children’s Hospital is very much the history of Louisville, which is why the 4,200 square foot exhibit opening at the Frazier Museum this month is so compelling. The hospital that now serves over 170,000 young patients a year grew out of the response to the devastating tornado of March 1890. In its aftermath, a group of nurses volunteered to treat injured children in a donated home in what is now Old Louisville. From there, money was raised and the Children’s Free Hospital officially opened its doors and soon began treating patients from our own community and from others where decent medical care didn’t exist.

The first patient was five-year-old Radford Duff from West Virginia, who had been declared a “hopeless cripple” due to tuberculosis in his hip. At Norton, he underwent surgery to remove the infected tissue, and was given a shot of bourbon because anesthesia was not yet available. He made a full recovery and was able to walk.

“We had educated workers and we had a local source of anesthetic, so we had the best hospital in this part of the country” says VP of Development Lynnie Meyer. “It’s incredible when you look at the determination and resourcefulness in in our early history.”

That determination to serve, heal and continually expand the boundaries of medical technology has created a dynamic, world-class healthcare institution that not only helped our city through the horrors of The Great Flood, the polio epidemic and dozens of other natural and medical crises, but also set the standards when it comes to delivering the very best state-of-the-art treatments to young patients. “Our neonatal unit has a level four NICU and is one of the largest in the county,” says Meyer. “We also have a level one pediatric trauma center. That not only allows us to treat the most serious, life-threatening conditions in our own community, but it allows us to treat children from areas where high-level treatments are not available.”

“It’s incredible when you look at the determination and resourcefulness in in our early history.”

The exhibit showcases many incredible stories of treating the “untreatable” and the unimaginable. For example, several of the survivors of the unforgettable Carollton bus crash in May 1988 were rushed to Norton Children’s. One of them, Quinton Higgins, who will attend the opening of the exhibit, says this of his stay at Norton: “I went from having the best day of my life to the worst,” he says. “I woke up in a room full of strangers. I couldn’t talk for two weeks. And what I remember is the overwhelming care. I almost have no words for it. I was scared, but I knew I was going to be okay.” Quinton, who had burns over most of his body and spent six weeks in intensive care, is now a bus driver, volunteer bus safety teacher, director of a new nonprofit called Voice for Change and a motivational speaker. “I think back to those days in the hospital as a turning point,” he says. “There was such compassion and understanding. I carry a huge part of that with me to this day.”

The photos and artifacts from the exhibit bring to life the stories of so many others whose lives were forever altered by the hospital. Like Trish Cardin, the mother of “Baby Calvin” (a pseudonym), the sixth infant heart transplant patient in the world. “If there hadn’t been a Norton Children’s Hospital, we wouldn’t have had Robbie at all,” she says. Robbie was born in 1986 with a heart defect that brought a life expectancy of no more than two months. Only five babies in the world had had the transplant surgery that their Norton doctor proposed to the Cardin family. “Dr. Mavroutis was so patient in how he explained it to us. He put it all into layman’s terms and he said, ‘If you’re not understanding something that I’m saying, you just ask me until you do,’” says Trish. “The other five patients were all still alive, so that told us it was the right thing to do.” After Robbie’s surgery when he was only twenty-one days old, Trish spent weeks with him in the hospital. “The nurses were phenomenal,” she says. When Robbie passed away at the age of nine— years later than most infant heart transplant survivors, it was also at Norton Children’s. “I remember walking out in the hallway to collect myself and I just saw doctors and nurses crying like babies,” she says. “They cared that much. He had his surgery at twenty-one days and twenty-one years later we are still connected to his nurses and doctors from Norton. We have them over for dinner. They are family.”

These moving stories from one-hundred-and-twenty-five years of treating children promise to make the exhibit at Frazier a mesmerizing experience for guests of all ages. But if that’s not enough, there are all kinds of bells and whistles that can easily turn this trip into a day-long adventure. Guests can experience what it’s like to be a patient on an ambulance ride, explore a 3-D heart designed for a fourteen-month-old boy, view the tiny diapers created for preemies or the collection of surprising items children have swallowed—and the hospital has removed—over the years. “This exhibit has it all. History. Technology. Great story-telling,” says Meyer. But that’s what you’d expect from an exhibit that celebrates an institution that has provided over a century of healing to some of the most deserving patients.