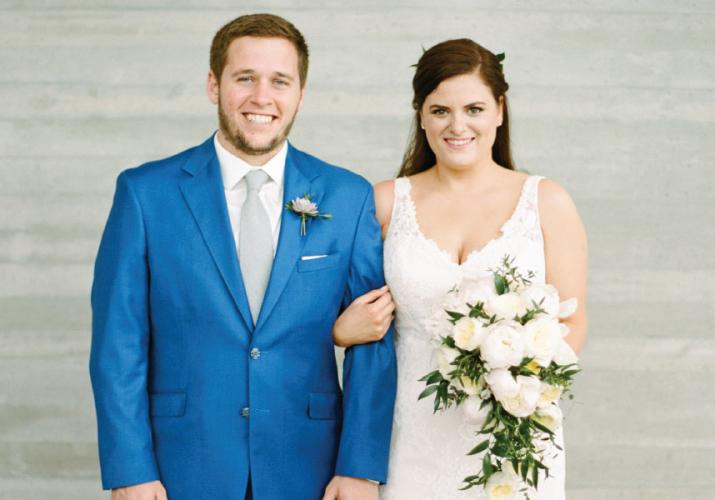 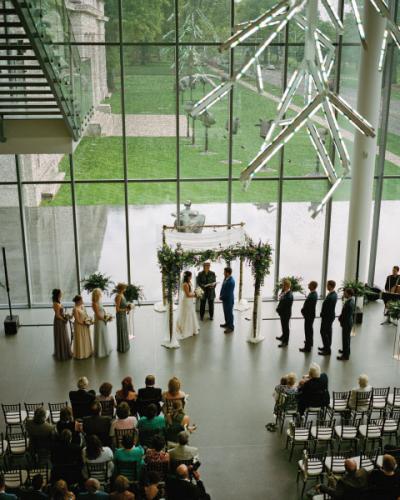 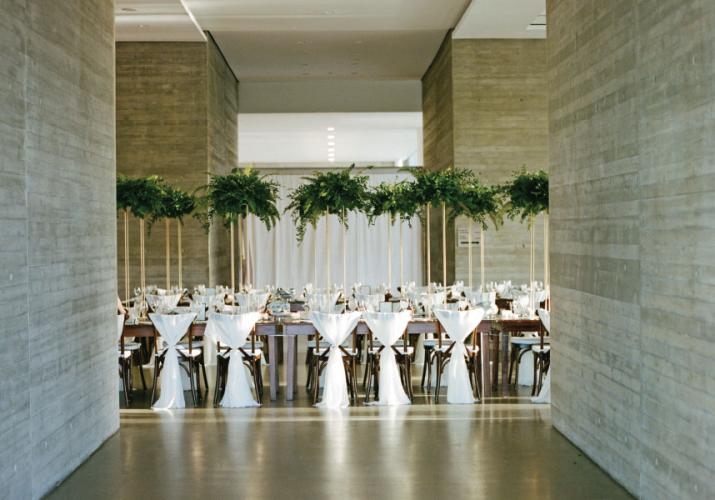 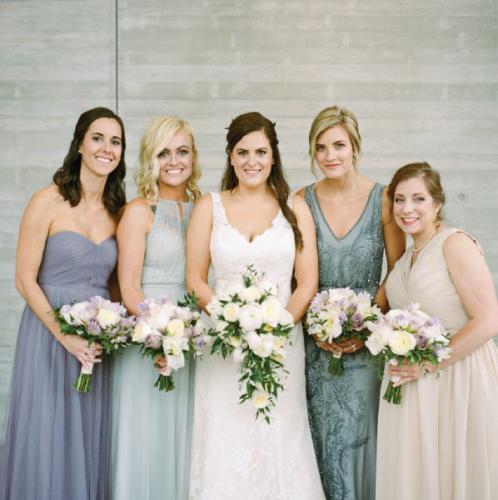 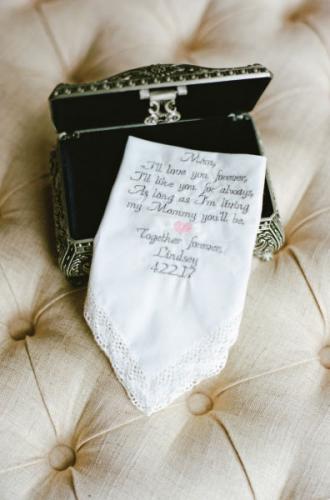 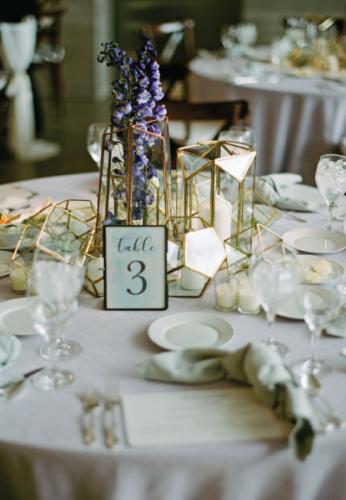 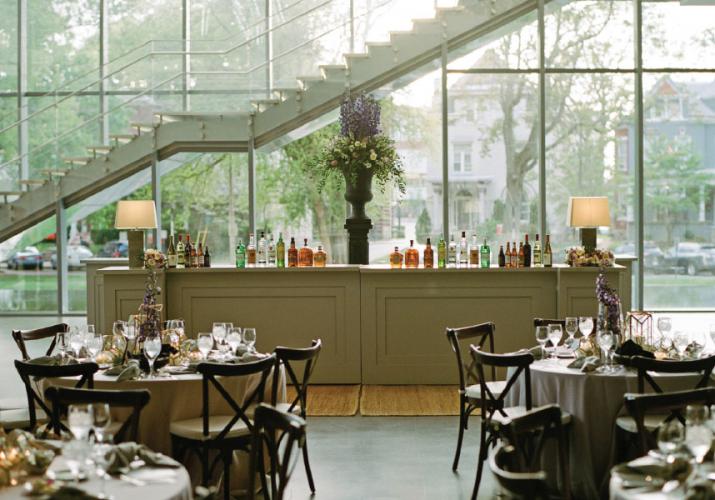 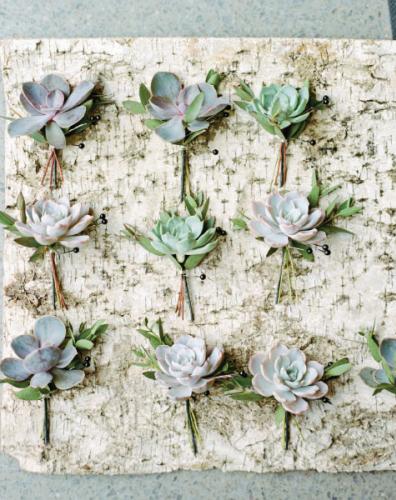 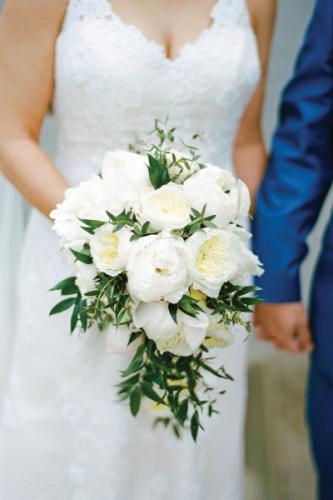 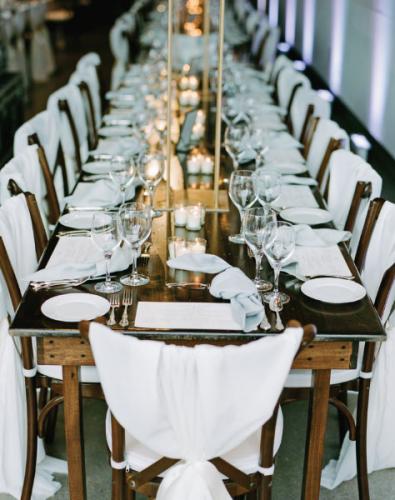 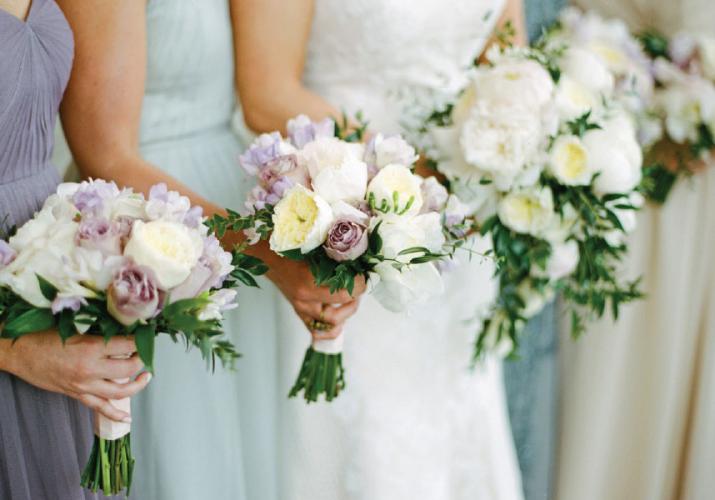 Bride-to-be Lindsey Trager was far from the fabled bridezilla. The former coach for the Ballard girls’ field hockey team, she was marrying her college sweetheart, Whit Bradley, a football coach at DuPont Manual and the two were more focused on finding a date that didn’t conflict with school or team schedules than they were on the finer points of their nuptials.
She really had only one firm request: “She knew she wanted to be married outside in a garden and she knew she wanted it to be Yew Dell,” says her mother, Sandra. So she and Lindsey booked Yew Dell before they did anything else— choosing the weekend of Thunder Over Louisville. Once she and her mother agreed on wedding planner Lauren Chitwood, Lindsey left most of the planning in their hands. “She had definite opinions, but she trusted Lauren,” Sandra says.
Lindsey’s relaxed attitude was tested, however, when the week of her wedding arrived along with dire weather forecasts. “The week of Thunder is always iffy,” says Lauren who, as the event planner, was the one charged with formulating contingency plans. “So, we had planned to tent the pavilion. We had flaps we could secure. We had a solid plan B.” But as the week progressed and the forecast deteriorated, Lauren began to fear that no outdoor plan could be weatherproof enough for the predicted storm-a-gedon.
“We were cautiously observing the changing forecast all week and we started planning more adjustments like creating tented walkways,” says Lauren. “But the trifecta in wedding disaster is cold, wind and rain. You can’t do all three outside. You can handle any one or two, but the three just don’t work.” By Wednesday afternoon, the forecast was becoming increasingly menacing. (“They were talking about ice storms,” says Lauren.) So, the seasoned planner started seriously considering shifting gears and moving Lindsey’s garden wedding for 250 guests out of the garden and into…someplace else they could lock down at the last minute.
“So, it’s Wednesday night and the wedding was Saturday,” she says. “I remember calling the project manager and our senior event designer and asking, ‘Am I crazy? I felt like I was being rational, but I had to talk myself through it on multiple levels. We could spend enormous amounts of money trying to secure the location, but we were never going to be able to promise the family that it would be perfect. That night, I went over to Sandra’s house and said, ‘Hear me out. You can say no and we’ll do whatever we can. But if I step away from being able to promise you that you will look back and say, ‘We had an amazing party,’ I have to start reconsidering the plan.” Sandra listened and agreed. Then they had to call Lindsey. It was now almost midnight.
They reached Lindsey who sounded shocked at first, then asked for a little time.  She hung up the phone and called back ten minutes later. “She took a moment and called back and said, ‘Good luck, girl, make it happen,’” says Lauren. “I was in awe that she trusted me so much.” Since she was already working with Wiltshire Pantry and Cafe, the official caterer for The Speed, she called owner Susan Hershberg that night and found that, somehow, miraculously, the newly renovated museum was available. “Their event planner Sterling Franklin was incredible,” says Lauren.

“We worked the next forty-eight hours almost nonstop to make it happen.”

So Chitwood and her team went into logistical overdrive. “We kept with the same theme and ideas, but the space had a very different aesthetic,” she says. “So, we did spend a little ore on flowers. We went into our warehouse and found hanging rings and created a hanging floral canopy that we hung with lanterns.
Two days later, the Speed was transformed, the bride and groom were thrilled and the guests were greeting the planning team with hugs and high-fives. “It wound up being one of the most complicated, stressful, successful punts of my life,” says Lauren “But kudos to Lindsey. Not every client could have ridden that wave.” Sandra feels the same way about Lauren: “I don’t think there are too many people who could have pulled that off in two days,” she says. “We had two hundred-and-fifty guests and they were all amazed by the beauty of the space. Lindsey and White were married in front of the windows, so it brought the outdoors in. It was a beautiful wedding.”  It was also an incredible story—about having a garden wedding in a concrete and glass museum— that the couple, their family and friends will remember for the rest of  their lives.