THE INSIDE SCOOP WITH CHEF JAMES ADAMS OF THE BROWN HOTEL 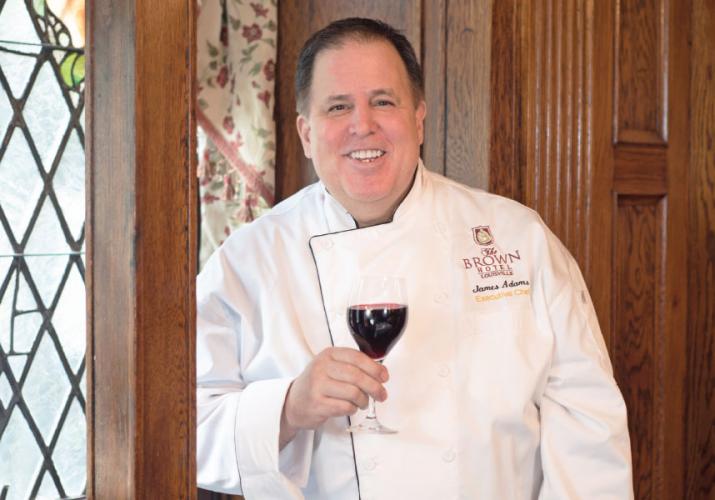 Why are so many of our most lasting memories of food?
Because the passion that goes into food is so powerful. When I lived in Poland I saw how much attention to detail went into the food and beautifully appointed tables. That’s really true for most of Europe. I tried to share that with everybody and amplify it after I came back to the United States.

What are some of your fondest memories?
I was awarded the Gold Medal for Excellence by the American Culinary Federation in 1990 for putting on a function at the New Orleans Hilton. Two thousand chefs came for a six-course meal. It was flawless. That’s when I knew I was going somewhere in my career.
When I moved to New Orleans from San Francisco, my hometown, I was part of a group of chefs like Paul Prudhomme, Emeril Lagasse and Susan Spicer. That was wonderful.
My last accomplishment in New Orleans was as opening chef of Harrod’s Casino. I designed the kitchen, developed the menu, hired the staff. I didn’t sleep for six months.
You’ve invited friends to your house for dinner. Give us a hint of what will be on the menu.
Anything on the grill – meats, vegetables, potatoes and pizza flatbreads. I also smoke nuts, but I also do that at The Brown. They’re almost like candy and are so easy to make. Just put some applewood in a pan on the grill, top it with nuts in a perforated pan, and start smoking.
You and Emeril were buddies?
He was my next door neighbor in New Orleans and we did a lot of food shows together. A great guy, very down to earth. He was always curious about what I was doing. I hope he comes to The Brown one day. I’d serve him something with sorghum and bourbon, probably lamb chops. Or maybe a center-cut pork chop. And, of course, the old number one, a Hot Brown.