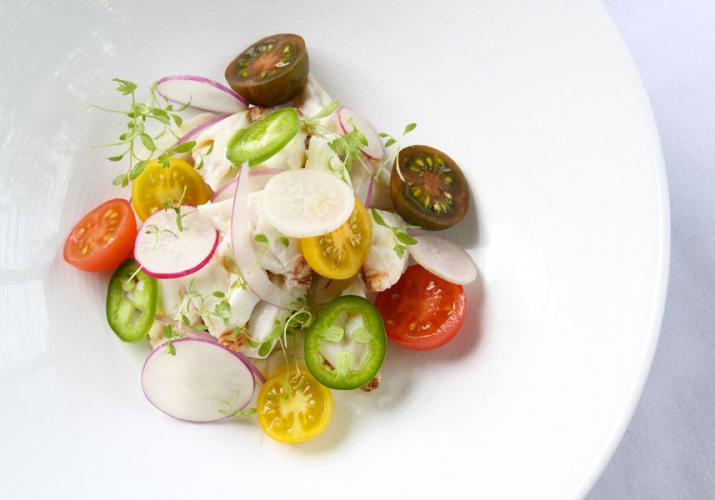 Healthy dishes can be delicious too like this local spin on a Latin American classic.

Make the broth: In a small bowl, whisk together all the broth ingredients until well combined. Cover and chill until ready to serve.

Make the salsa: Holding the stem end of the corn cob and placing the pointed tip on the counter or in a bowl, use a knife to cut down the cob, removing the kernels; place in a small bowl. Add the rest of the salsa ingredients, except the cilantro, to the corn. Toss to combine, then cover and refrigerate until ready to serve.

Prepare the tomatoes: Just before serving, in a medium bowl, toss the tomatoes with the lemon  juice, olive oil and salt; taste for seasonings.

On individual plates, evenly portion the crab-corn mixture (scoop it out of the broth), then top each with about 7 thin slices of the pepper and about 7 halves of different colors and varieties of heirloom tomatoes. Add a little crab broth, if desired, and then drizzle each serving with the juices that accumulated from the tomatoes. Garnish with crispy fried tortilla chips and serve immediately.