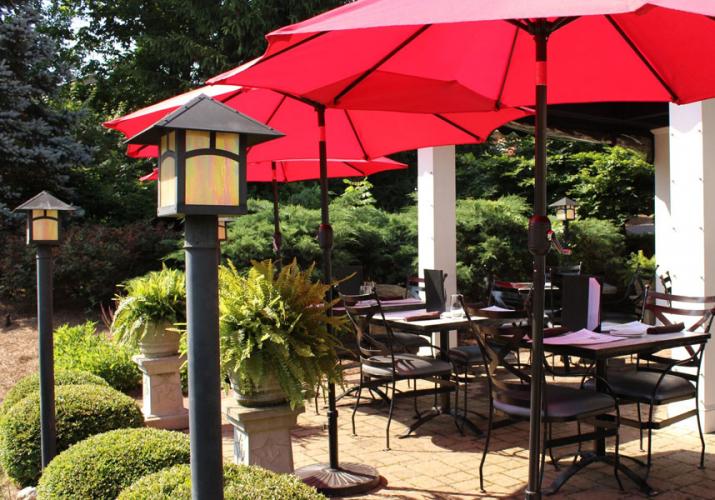 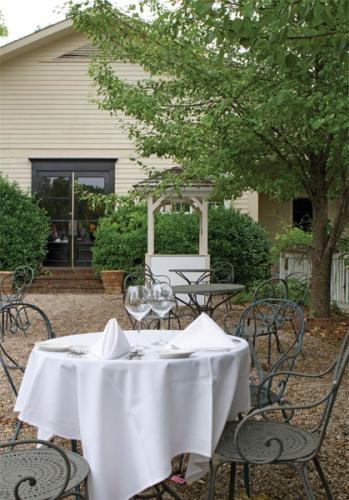 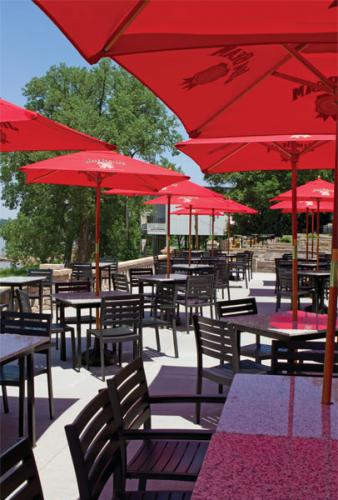 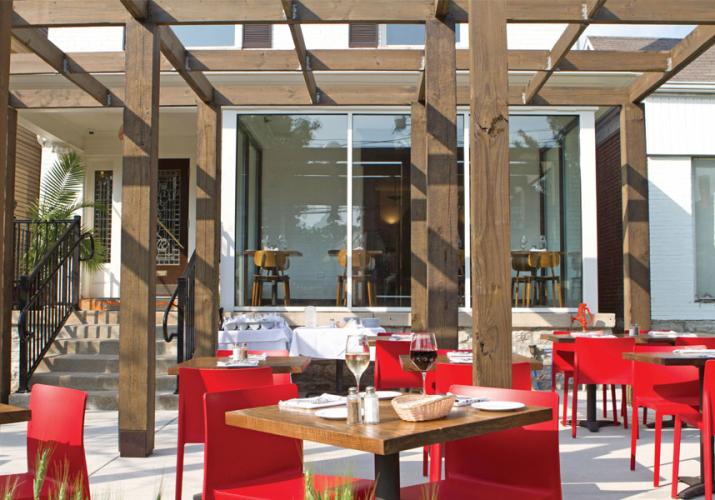 RIVER HOUSE
Dining al fresco at River House is a treat and a feast. The patio that overlooks the river is ideal for enjoying a seafood extravaganza that’s punctuated by Chef John Varanese’s love of the best of the South cuisine.
Snack on the peel and eat shrimp as you peruse the menu. If you can’t decide on the oysters, crab or shrimp on the raw bar, give into the lure of the River Tower that has those as well as mussels and lobster.
Appetizers and entrées pay homage to both the sea and the farm, running the gamut from blackened tuna and sautéed mussels in chipotle lime broth to braised beef short rib and bacon-wrapped pork tenderloin. Fried green tomatoes and southern fried quail eggs are a couple of tastes of the South that have found a deserved home along the river.
Mellowing out on River House’s patio and letting Varanese pamper your palate is one of the best recipes for enjoying summer in the city.
River House • 3015 River Road • 502.897.5000 • riverhouselouisville.com

ROC
Manhattan restaurateur Rocco Cadolini has been a frequent visitor to Louisville. We’re glad he liked to partake of our mix of Midwestern friendliness and Southern charm so much that he opened an Italian restaurant similar to one he owned in Tribeca right here on Bardstown Road. ROC is receiving kudos for traditional dishes such as grilled octopus, fried calamari, linguine with clam sauce, fettucine Bolognese and veal scaloppine. And diners are swooning over jazzed selections of salmon carpaccio, black squid ink taglierini with lobster, and ravioli with walnut sauce.
ROC is ushering in summer with the fresh seasonality of buffalo mozzarella and fresh tomatoes, Scottish salmon with asparagus and branzino with vegetables. Three panini are served with ROC truffle fries. Go ahead, enjoy the fries. Worry about swimsuit svelte tomorrow.
No one would blame you if you wanted to stay seated on the bright red chairs at wooden tables under the outdoor rustic trellis. But, don’t neglect taking a peek inside where the décor is tastefully understated.
ROC • 1327 Bardstown Road • 502.459.7878 • rocrestaurant.com

THE SEA HAG
Rain or shine, The Sea Hag is a joint that’s always jumping. The covered patio, which can be enclosed in the unlikely event of a torrential downpour blowing sideways, is a meet-and-greet spot for some swell cocktails and a menu that’s a little bit Southern and a heap of unfancy goodness.
You don’t have to start with the Mom’s Hot Banana Pudding Meringue but the kitchen rolls out only 25 a night, so if you’re the twenty-sixth to order, you’ll kick yourself when you watch it being devoured at the next table.
Chef Henry Wesley is a likeable guy you’ll love when you taste his blackened fish tacos, goat cheese gâteau, shrimp and grits, and ricotta- and corn-stuffed ravioli with mushrooms and pesto. He, and you, have owner Kevin Grangier’s mother, Myra, to thank for the fried chicken recipe.
The Sea Hag’s Mrs. Robinson (peach bitters, Champagne and elderflower liqueur) is one of hot weather’s best-ever cocktails. Celebrate summer and say adieu to the workweek with fresh fruit margaritas served on Friday.
The Sea Hag  at The Village Anchor • 11507 Park Road • 502.708.1850 • villageanchor.com

GARAGE BAR
Some people go to Garage Bar for the bourbon and beer, others for the pizza, and others for some of the best people watching in town. Most go for all three.
Garage Bar is a unique NuLu outdoor dining spot, having an art installation out front that shows two cars colliding. The clamor of high spirits that can be heard for about a block away tells you know the food and drinks at Garage Bar aren’t a secret that anyone wants to keep to themselves.
Chef Richard Sible has teamed up with several farmers and purveyors to create a menu that’s seasonal and locally-focused. Don’t be surprised if one of them is seated nearby, being in-the-know to order the turkey wings or pork meatballs. Sible’s Ham and Cheese Board is a one-stop treasure for three different country hams and three types of cheese. From Garage Bar’s wood-fired pizza oven come the unexpected combinations of bleu cheese, peaches and ham; and a surprise such as bacon meets sweet corn and bourbon pickled chilis.
Save room for the Moon Pie custard.
Garage Bar • 700 E. Market Street • 502.749.7100 • garagebaronmarket.com

211 Clover Lane
Imagining that you’re dining with amiable hosts at their home in the French countryside isn’t that much of a stretch when you’re sitting in the courtyard of 211 Clover Lane, secluded from the hustle and bustle of St. Matthews.
Owner Andrew Smith’s casual suavity sets the tone for leisurely dining where regulars gather with convivial familiarity and it doesn’t take long for newcomers to feel as if they have found a lovely home away from home.
Chef Allen Heintzman prepares classic French and Italian dishes as well as those to which he adds his own distinctive flair.
Spinach salad with lamb bacon, and roasted red peppers stuffed with goat cheese are memorable kick-starters. A selection of fish and seafood entrées include spicy tiger shrimp salad accented with mangos and avocados, poached halibut and grits, and diver scallops over mushroom and navy bean ragout. Trout with roasted potatoes and wilted spinach is a favorite among those who often treat themselves to Heintzman’s repertoire. The kitchen also turns out superb lamb chops over polenta and filet of beef paired with Dauphinoise potatoes.
211 Clover Lane • 211 Clover Lane in the Colony Center • 502.896.9570 • 211clover.com