THE KENTUCKY DERBY THAT ALMOST WASN’T 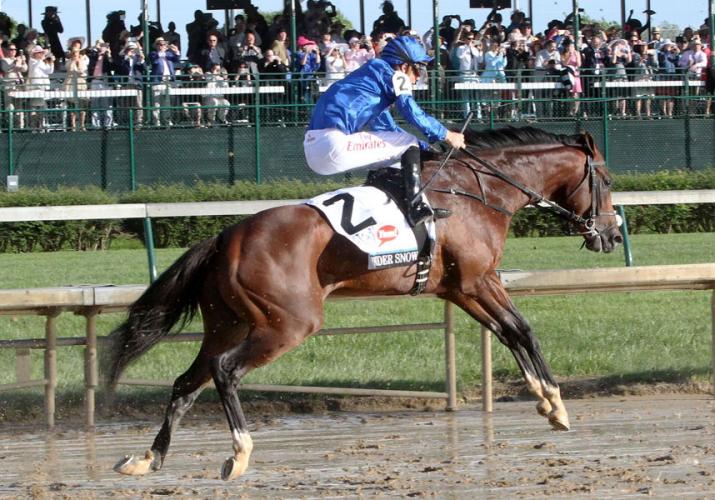 We all saw the moment when Thunder Snow decided he wasn’t setting hoof on a muddy track. Drew Deener shares the backstory on the lightning-fast maneuvers that got him safely out of the way so the 143rd Run for the Roses wouldn’t grind to a halt.

How close was this year’s Kentucky Derby to being stopped before the end of the race and declared a “No Contest”?  Probably about 90 seconds and one good outrider.
Go back and watch the start of Kentucky Derby 143, and you will see the horse breaking from the second post position, Thunder Snow, start bucking like a bronco just after he leaves the gate.  The 3-year old who shipped in from Dubai, appeared to have no intention of running on that muddy track on the most recent first Saturday in May.
“That was a horse who raced exclusively on grass in Europe as a 2-year-old, and then trained in the desert in Dubai in the winter.  I’m betting this horse has never set foot on a wet racetrack in his life,” said Darren Rogers, Senior Director of Communications for Churchill Downs.
So 19 horses are running like a stampede down the Churchill Downs stretch.  Meanwhile, there’s one all alone a few jumps after the starting gate, kicking around in the mud.
That’s when outrider Greg Blasi went to work.  Blasi was stationed just past the starting gate, and when he saw Thunder Snow kicking around in the middle of the track, he did his job to perfection.  Blasi made sure the horse was okay, then corralled Thunder Snow with his own pony.  But now the clock was really ticking on this tandem.
“Blasi has about 90 seconds before the rest of the field comes back around,” Rogers said. “He has to get Thunder Snow off the racetrack.  If that horse starts running the wrong way, throws the jockey, or can impede the field in any way, then in all likelihood the Stewards of the Kentucky Horse Racing Commission are going to call the Derby a “No-contest. “ That means about 140 million dollars worth of bets would be returned.”
Can you imagine the 2017 spot on your Derby Glass next year being blank?  That could have been the net result.
Instead, Blasi, who has been the lead outrider at Churchill Downs since 2006, got Thunder Snow contained.  Now where do you put him?  The most logical place is the tunnel to the paddock where the horses enter for the singing of “My Old Kentucky Home.”  But the tunnel was filled with people.  All kinds of people: owners, grooms, and media, who were watching the race.  Blasi, with the help of the maintenance staff,  removed the rail to the tunnel, cleared the people who were there,  and got both horses off the track and out of the way of the herd of the 19 remaining horses in the race that were somewhere along the backstretch at that point.
With Thunder Snow safely contained in the paddock, Blasi headed back toward the track as the field was running down the backstretch to see that the paddock runway gate that had just been moved for him was being put back up. Blasi got people’s attention to let him get back on the track in case something else happened in already adventurous Kentucky Derby for him.
“It was fabulous horsemanship from Greg, assistant outrider Lee Lockwood, and the maintenance team, too,” said Rogers.
Blasi has declined a couple of interview requests because he apparently doesn’t want to draw attention to himself. I’m told he just views his work that day as having done his job.  Nothing more.  Nothing Less.
So how close did we come to having a blank spot next to the 2017 Derby Winner?
Says Rogers, “Well we don’t like to deal with hypothetical situations, and the good news is that we didn’t have to deal with that, thanks to Greg.”