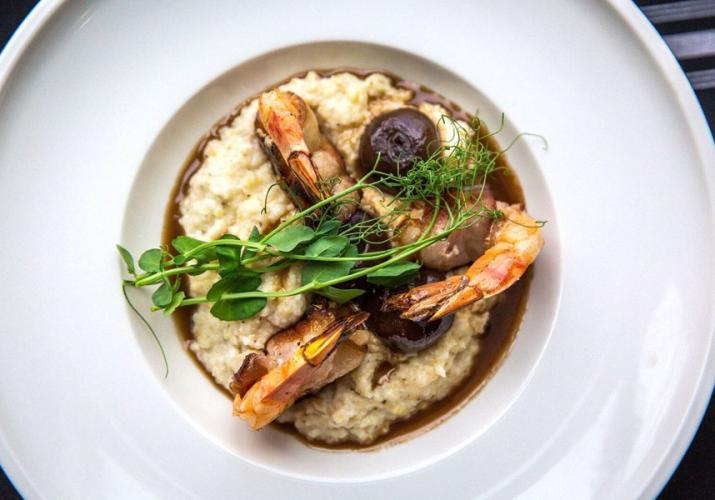 Brooklyn and the Butcher 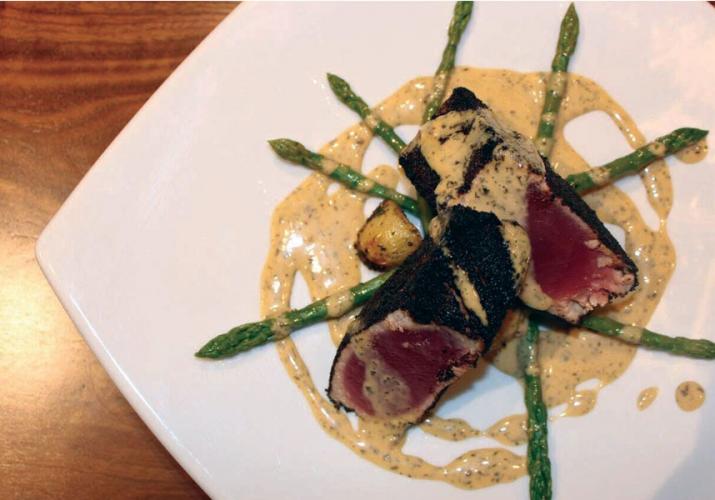 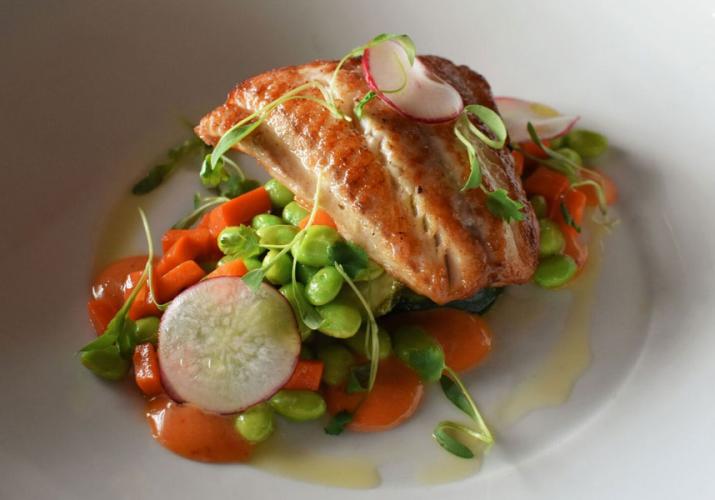 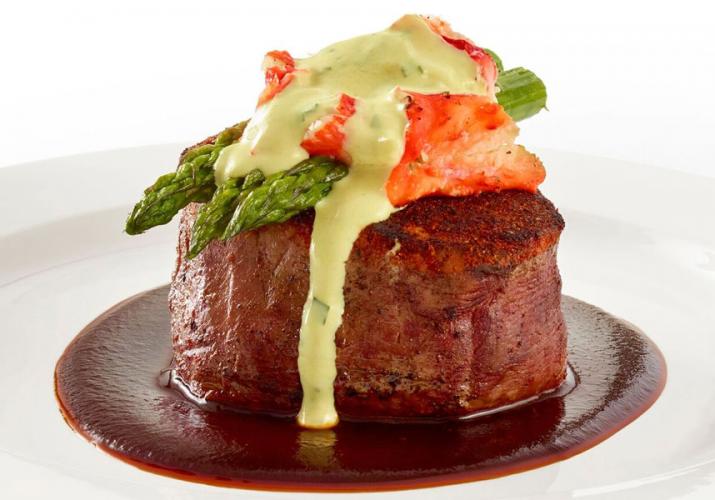 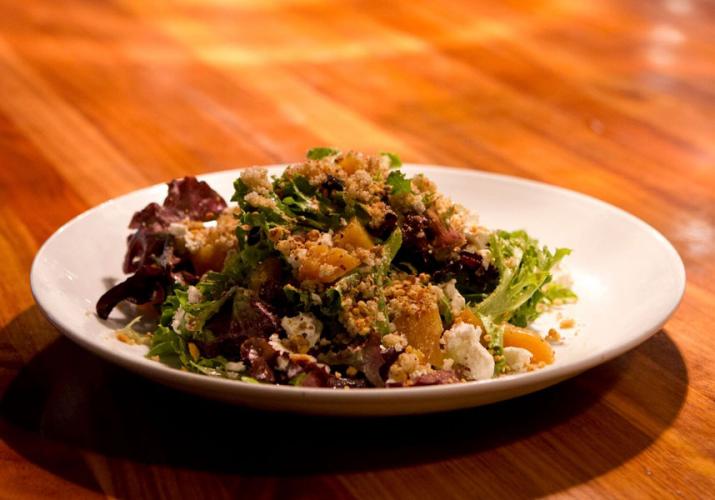 Brendon’s Catch 23
Brendon’s Catch 23, located on the first floor of Embassy Suites Hotel, 505 S. Fourth Street, is a slickly cool restaurant where business can be pleasure.
If your company is picking up the tab, thank your good fortune and order Brendon’s Seafood Tower – shrimp cocktail, shucked oysters, crab legs and a chilled lobster. It’s a cornucopia of indulgence meant for sharing. You deserve it. At least tell that to the boss.
The people behind the scenes know a thing or two about bars. There’s an oyster bar studded with Bluepoints and Chesapeake Bays sitting on ice just waiting to be plucked.  A focal point of the interior is a stop-you-in-your-tracks bar with a nice selection of bourbons which will ease you into business. Or, kick things off with an edgy craft cocktail.
The Catch Up menu, served from 4 to 6 p.m., offers small plates such as peel-and-eat shrimp, fried clams and truffle fries for a stand-alone mini meal or as a teaser for a big shebang.  Low country dishes, steaks and an assortment of seafood take you on a heartier venture into the impress-your guests Brendon’s Catch 23 experience.

Jack Fry’s
Jack Fry’s, 1007 Bardstown Road, exudes a kind of clubby atmosphere. Not the pretentious ambience of a club you don’t want to join but where you secretly might want to become one of the elite.  Stephanie Meeks took over the reins few years ago when she purchased one of Louisville’s most beloved restaurants from Susan Seiller who had maintained Jack Fry’s tradition with a confident hand. The place is so steeped in tradition that it makes you feel as if you’ve been a Jack Fry’s regular forever, even if it’s your first visit.
There’s a different menu for lunch and dinner but there’s no difference in Chef McClain Brown’s flawless execution. Sip a fine cocktail before you tackle the quandary of ordering among winners such as the duck confit salad, fried oysters, corned beef, and pork chop with smoked bacon and shiitake with a rosemary reduction that’s would be worth sipping on its own. Regular diners avoid that conundrum because they can’t pass up the shrimp and grits with red eye gravy and country ham.
Life is full of choices that can drive you crazy. At Jack Fry’s you can’t make a bad one.

Jeff Ruby’s
At Jeff Ruby’s, 325 W. Main Street, the notion of a traditional steakhouse is upended by an energetic reinterpretation that retains the best of what you’d expect from a steakhouse and jazzes the concept up several notches.
The trifecta of food, service and atmosphere attracts a bevy of out of town visitors, but don’t let that stop you from making Jeff Ruby’s a not-to-miss spot. Locals and visitors to our fair city become one happy family.
Before you get down to the business that took you to Jeff Ruby’s, you’ll need to tend to the business of ordering. Sharing fried pork belly and crab cakes is bound bond your group. Mix and match to your heart’s content from the raw bar selections. And get ready for a sushi surprise. It’s some of the best in town.
Any of the nine cuts of steaks will fortify you for tough decision-making. But no one will think less of you if you overrule a steak in favor of lamb chops, duck breast, salmon or sea bass.  Not quite ready to call it a night? Treat yourself and your colleagues to dessert. May we suggest peanut butter pie or mousse cake? Or you could opt for a less caloric finale of Port, a Gran Marnier flight or Frank Sumatra coffee.

Mesh
Business talkers sit side-by-side lively discussions of newsy Louisville goings-on.
Somehow, at Mesh, 3608 Brownsboro Road, it all works in a spirit of camaraderie boosted by the kitchen that turns out an eclectic mix of American, Asian, Italian…well, you get it…a little bit of everything, and it comes off well.
You gotta love a menu that starts with fried green tomatoes, tuna tartare, baby back ribs and a charcuterie board. From there it’s on to From the Land and From the Sea. Carnivores can chow down on filet mignon, lamb shoulder with spiced lentils, and an applewood smoked pork chop. But vegetarians can peruse a menu of striped bass with butter bean chow chow, grilled scallops and bourbon glazed salmon. Don’t ignore sides such as lobster mac ‘n cheese, braised greens and Brussels sprouts au gratin. They’re too good to be considered tagalongs. Happy Hour ups everyone’s happiness with meatballs, sliders and calamari Small Bites that pair well with wine and spirits specials.
There’s a feeling that there’s a Mesh in-crowd but don’t be put off by that. Your fellow diners and amiable servers make you feel you’re the newest member of the group.

Brooklyn and the Butcher
Along with New Albany’s renaissance has been the reimagining of a few treasures. Brooklyn and the Butcher, 148 E. Market Street, is one of the  most delightful. Housed in a former hotel that dates to 1871, the restaurant is a big bite of historical décor that welcomes modern design elements.
The exterior reflects the architecture of Brooklyn, New York. Inside is a panoply of repurposed bars from local  landmarks.
Brooklyn and the Butcher combines the expected offerings of a classic steakhouse with unexpected dishes that range from rustic to fancied up French and Italian. Pique your palate with steak tartare, oysters Kilpatrick, French onion soup or panzanella salad. Steaks such as a Manhattan strip, Wagyu sirloin and Porterhouse can be accompanied by the sauce of your choosing – chimichurri, au poivre, sautéed mushrooms with cipollini onions and bourbon sauce, and bacon and Gorgonzola. Not in the mood for beef? Brooklyn and the Butcher has you covered. Ravioli, pork shank with saffron risotto, ricotta gnocchi or fettucine with sausage and radicchio will make you swoon.  If you have to trek across the river to get there, it’s a short excursion that will reap big rewards.