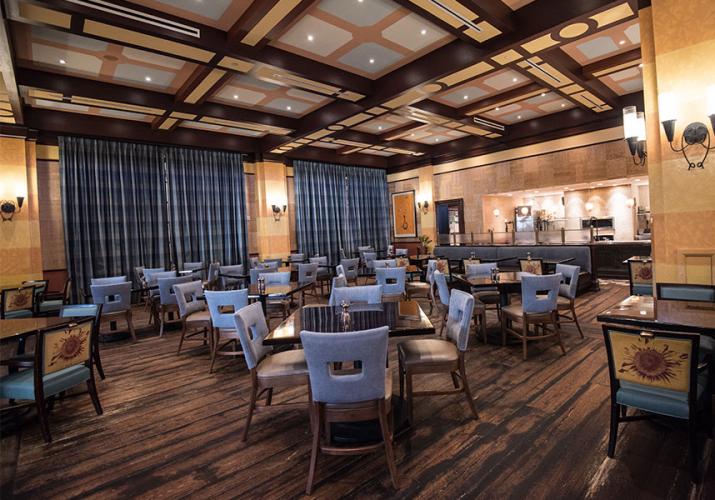 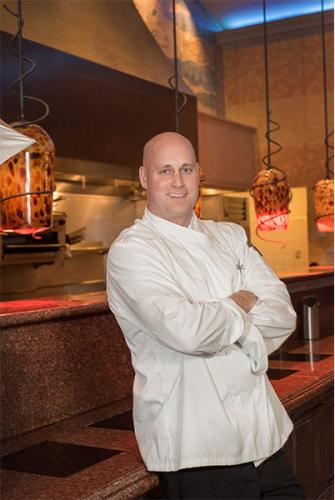 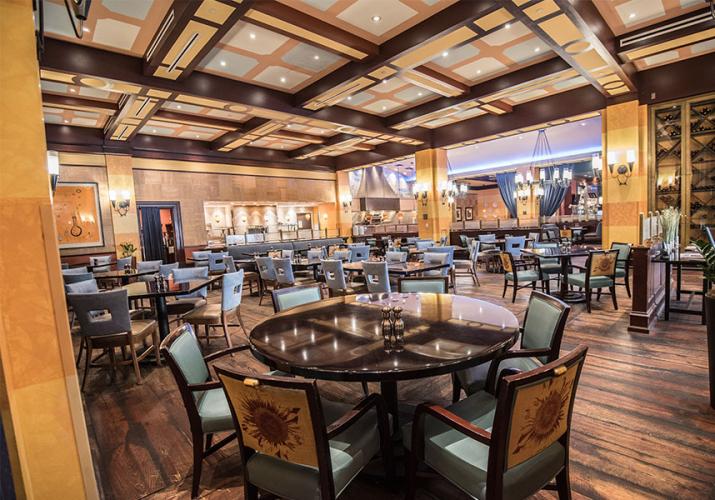 The bustling downtown Louisville Marriott has much to boast about especially its highly successful restaurants and the man behind the buzz. Champions and BLU Italian  Grille’s Executive Chef Graham Weber, has created delicious fare all over the country before settling in Louisville.
His journey began waiting tables and he soon found himself drawn to the creative process behind the scenes. Going to a vocational high school, he spent part of the day in traditional classes and the rest was spent exploring culinary arts. He graduated with honors from The Culinary Institute of America in Hyde Park, NY and earned his certification through the American Culinary Federation.
Now as the executive chef for these established downtown venues, he is dedicated to delivering local products from vendors, farmers, and cheese-makers throughout Kentucky. It isn’t something he simply preaches, he lives it. Residing on a farm with his family, he raises cattle, chickens, turkeys, and grows a variety of berries and vegetables which allows him to expose his children to the farm to table concept. Embracing the lifestyle is the catalyst for bringing this platform to both kitchens.
Constructing all of the food from scratch is a staple for both establishments. When asked to name his favorite go-to local product, he hesitated as there were too many to list, but he narrowed it down to Boone Creek Bourbon cheddar, bison from Woodland Farm, and Father’s Country ham. “The country hams around this area have so much more depth, complexity, and flavor that I don’t even turn to prosciutto anymore.”
Besides overseeing the fast-paced kitchens at both restaurants, he also participates in the menu planning for the large volume of galas that the Marriott hosts each year including The 2017 Filles Derby Ball and The Gallop Gala that benefits Down Syndrome of Louisville – both happening in April. He was currently wrapping up preparation for an upcoming gala that involved developing a menu of Indian cuisine. Nothing is too complicated. In fact, the creative process of his job along with knowing that each day will offer something new and exciting is what inspires him most. The planning of these large events is a team effort headed up by an event manager who assists in the coordination and execution of the occasion. Each menu is tailored for the individual needs of the client.
“We conduct a phone conference to get an idea of the theme. Then we schedule a tasting where we pair wines and make specialty drinks to correlate with that particular theme along with samples of salads, entrees and desserts, allowing them to be involved in the process of creating an individualized event.” Clients are encouraged to tweak their menu in any fashion they see fit. Once the menu is finalized, they use photographs of each dish to match as they plate up, insuring that the client is receiving exactly what they ordered. On the night of the event, teams of people are positioned accordingly and Weber describes the process as a “conveyor belt”. The systematic approach allows them to plate up to 200 plates every fifteen minutes.
With all the responsibilities that come with this job, Weber exudes a sense of calm. He attributes that to his hardworking support staff and the realization of expecting the unexpected.

“You can start the day with a game plan, and as the day progresses, it winds up being the exact opposite. You have to be flexible. Fortunately, I am surrounded by an incredible army of culinarians who have my back every day.”

While the routine of running two restaurants and helping implement the success of a variety of events is ongoing, he is looking forward to the exciting upcoming changes occurring in the next few months. Both restaurants – BLU and Champions – will no longer exist. Instead, the lobby and bar will become one entity while a wall of bourbon – that will extend past the elevators - will be a focal point. The stairways in the lobby will be taken out and replaced with additional seating contributing to the open concept. There will be an enclosed glass private dining area and a speak-easy, high-end, bourbon room. Live music from local artists will be featured seven days a week. The new restaurant – that doesn’t have a name at this moment - will serve items like bison, steak, and country ham – focusing on a more regional style of food and stepping away from its present Italian fare. In fact, patrons will get a sneak peek when this new concept is rolled out for Derby. But don’t worry, through the reinvention of the space, one of the restaurants will always be open, so patrons won’t go hungry when visiting.
Construction begins June 17 on a portion of the area and that will be complete in August. Then the next phase will begin, which they hope will be finished within a few months. The end result will be a stylish and sophisticated setting that will welcome travelers and locals alike, converging on our ever-growing downtown.
Until that time, BLU bar will continue to entertain patrons on Wednesday nights where one can enjoy half-priced bottles of select wines. If wine isn’t your thing, Thursday nights offers an opportunity where you can sip on select bourbons on special while enjoying bluegrass music. Live Jazz fills the air on Sundays at BLU, where a delicious brunch treats guests to house-made pastas, eggs benedict, made-to-order omelets and a carving station along with their signature home-grown table that features hand-selected meats, cheeses, antipastos, and salads. If following the “Urban Bourbon Trail” is on your agenda, BLU bar is the first stop. In fact, the hotel offers packages to correlate with the tour which explores Kentucky’s rich bourbon heritage.